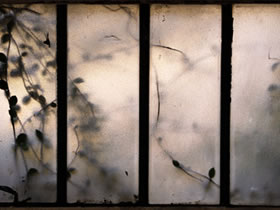 When I got into the hall of Palazzo Strozzi for the opening of “Green Platform” , the latest exhibition organized by Centro di Cultura Contemporanea di Firenze (Centre for Contemporary Culture in Florence), the cue waiting to get in was unexpectedly long. I am not used to it. Contemporary art, outside the certain circuits and without high-sounding names, can hardly attract the big crowds.

CCCS has managed to do that. Little later than one year since its opening, it emerges as one of the most active and interesting hubs in the Italian panorama. Not only on account of the artistic and organizational choices, but also thanks to the underlying conception that art is first of all a creative look at the world and things and as such it belongs to the people, not just to the operators.

That’s why the topics for the exhibitions – which should be actually called platforms for collective meditation and discussion, are always absolutely topical and linked with social and political issues, with the risk, sometimes, of running up against tricky subjects. Such was certainly the case for Green Platform , the exhibition overseen by Lorenzo Giusti and Valentina Gensini, and devoted to the by now ubiquitous issue of ecology.

From automotive to fashion, each and every company nowadays takes good care to include the magic prefix eco in their campaigns: eco-car, eco-dress, eco-food, eco-furniture, eco-whatever-in-the-name-of-the-economy. And what about art? We know that art can at times become a pseudo-innovative offshoot of a market strategy that deprives it of its original subversive drive. Devoting an exhibition to ecology in this period, opening just one day after the much spoken of Earth Day, implied indeed a high risk of trivialization. The two curators, being aware of that, decided to get round the problem and launch a fertile and inspiring debate on the topic, by focusing on a very simple question: what is ecology? Is it really the safeguard of the environment or is there something more to it?

Starting from Gregory Bateson’s holistic notion and the ecosophic approach by the French philosopher and psychoanalyst Felix Guattari, Lorenzo Giusti and Valentina Gensini have widened the scope of the word ecology from the relationship between man and nature to all kinds of interaction in which humanity is involved: from social relationships to cognitive experience. At this stage ecology means imagining a world where the interaction takes up a central role. Interaction between man and nature, but also between media, ideas, disciplines, human beings. The observation of nature becomes a starting point to develop creative strategies capable of overturning the destructive logic of our socio-economic models where things are quickly discarded, to become waste.

The result is a show that gathers the works of artists with very different approaches, whose common ground may be, as pointed out by Gensini in her manuscript within the catalogue, “having turned out any poetic and emotional mimesis to look at the natural world with an analytic attitude “.

Hence Nicola Uzunovski’s visionary experiments, Futurefarmers’ and Superflex’s activism, the journalistic video reports by Amy Balkin, Michele Dantini and Alterazioni Video, the alluring images by Carlotta Ruggieri and Christiane Lohr, the scientific survey by Andrea Caretto/Raffaella Spagna and Nicola Toffolini, down to the realistic utopia by the landscapist Gilles Clément, who was interviewed for the documentary by Ettore Favini .

Through technology and nature, through social denunciation and existential metaphors, “Green Platform” helps us remember that art is above all capability to activate creative connections that can imagine and “build worlds”. Ecological worlds because wasteless, because capable of bearing differences and marginalities beyond any kind of evolutionism. Ecological worlds because capable of eluding the systematic and thorough control by the late-capitalist society, developing unpredictable and resilient areas of freedom, just like those plants growing along the edge of the road or on abandoned buildings that Clément describes in his “Manifeste du Tiers Paysage”: “indistinct, indefinite spaces that are hard to name” . Ecological worlds, based on the connection between human beings and things, where art is the undercurrent that cannot be renounced

Let’s forget about eco-incentives and let’s start from creativity and imagination to give our world a habitable shape, because it is the only one that we have.