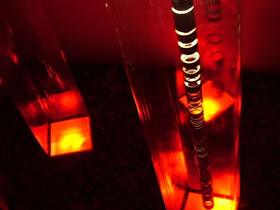 After more than one month of activity the third edition of the Pescara Electronic Artists Meeting is over. The meeting, this year, has shown artistic robustness, intellectual determination, social strength, political consciousness and philosophical inspiration. Peam2005 counted 15 curators, 12 sections, 7 locations (plus a “virtual ” one) and more than 100 guests running a large number of exhibitions, workshops, concerts and performances.

The most impressive thing has been the coherence with which all the artists and curators developed and maintained their ideas around the leit-motiv, The new human being positioning, with all the projects spinning around this request for a definition of human-beings hybridized by hi-tech. The research for a new human identity explores and redefines the human body, cognition, communication, spatial position and semiotic by reading the human-machine interaction under a different light. This approach has permeated the whole meeting, transforming it in a school for art and thinking vanguards.

The Peam2005 described the many aspects of human development in intellectual and meditative terms  as seen in the exhibit La Linea Sottile and the Post-Humans section  as well as popular and performative terms  as in the Video Art, Net.Art, Second One Second Video Festival, and Music and Audio Video Performance sections. The event has stressed the pedagogical factors by running a Peam-Educational section which highlighted the potentials that art might have, by bringing a prestigious event into contact with the youngest artists.

Finally, the entertaining experience itself has been moved forward, by reinterpreting the rave concept through the GR ave  a Rave dislocated in three locations linked by a “disco bus”  enriched by the Net.Painting and Visual-Bridge sections.

The meeting, organized by the Artificialia network and dedicated to those who make use of electronics in art, has confirmed its ability of analysis and synthesis, has established an artistic and social leadership, and has proved this appointment to be one of the cultural landmarks on the international scenario.