Sørlandets Kunstmuseum is proud to present two works by the renowned Swiss artist Pipilotti Rist. Rist is a pioneer of video art, acclaimed for her innovative installations. Her art has been characterized as playful, psychedelic and sensuous, with images, music and text coming together to create mesmerizing experiences.

Originally born Elisabeth Charlotte Rist, the artist made a new identity for herself with the name “Pipilotti,” borrowed from the character Pippi Longstocking in a series of children’s books by the Swedish writer Astrid Lindgren. Pippi Longstocking is something out of the ordinary: a girl-adventurer who lives as she pleases.

She is highly independent, imaginative and has an original approach to her surroundings. In Rist’s artworks we can find parallels to Pippi Longstocking. Here the most ordinary events or objects are filled with a sense of wonder; her exploration of our surroundings appears both whimsical and fantastic. Also like Pippi, Rist approaches the female subject in an unconventional way. 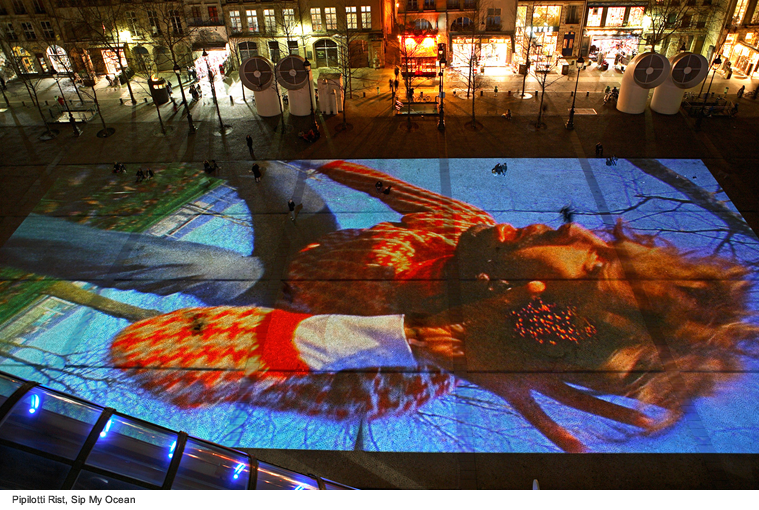 Rist began working with video art in the late 1980s, gaining recognition through producing works reminiscent of music videos, commercial advertisements and movie trailers. I’m Not The Girl Who Misses Much (1986), shown in this summer’s exhibition at Sørlandets Kunstmuseum, is one such example. This is Rist’s first well-known video, made while she was a student. The video features the artist in a low-cut black dress dancing manically.

The images are blurry, tattered and grainy, suggesting that we are looking through frosted glass. Rist repeatedly sings the slightly altered words from the first line of the Beatles’ song “Happiness is a Warm Gun.” The lyrics are sped-up, or slowed down, leaving us with the impression of a videotape being wound at different speeds. In creating the work, Rist borrows the video format from popular culture, but she eschews its popular conventions of narrative and spectatorship, especially in the way she presents her female subject.

Rist’s international breakthrough came during the 1990s. Her art was shown in the Swiss Pavilion at the São Paulo Biennale in 1994, and she received the Premio 2000 Award at the Venice Biennale in 1997. During this period, she started working with spectacular video installations. In the exhibition’s title-piece Sip My Ocean (1996), a video is projected as a two-mirrored reflection on adjoining walls, offering a kaleidoscopic view of an idyllic underwater paradise. The camera takes us on a slow voyage and offers dreamlike images. Objects that originally belong to life on earth are slowly sinking towards the seabed, and from time to time we see close-ups of a bikini-clad woman floating and swimming through the waves. The stillness under the ocean’s surface is disrupted by the use of intense colours and the accompanying soundtrack. Rist performs a cover version of Chris Isaak’s well-known ballade Wicked Game, sometimes humming and at other times screaming the lyrics. In this way the video’s voyeuristic and feminine aspects are challenged. 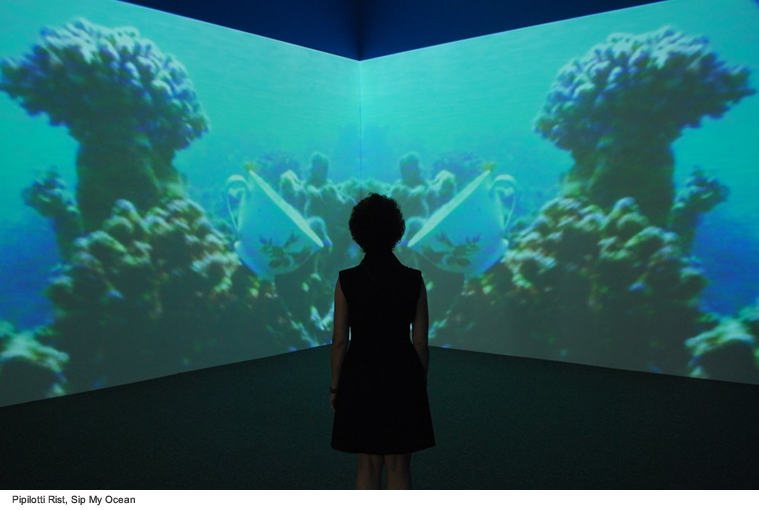 Pipilotti Rist was born in 1962 in Grabs, Switzerland and now lives and works in Zurich. She studied commercial art, illustration and photography at the Hochschule für Angewandte Kunst (College of Applied Arts) in Vienna (1982-86), and later studied video at the Schule Für Gestaltung (School of Design) in Basel. In 2005 Rist represented Switzerland at the Venice Biennale. She has held solo exhibitions at several major museums such as the Centre Pompidou in Paris, Hayward Gallery in London and the Museum of Modern Art in New York. Currently she has a major solo exhibition at Kunsthaus Zürich, running until May 8, 2016.