“J3RR1”: empathy with the machine. Interview with NONE collective

NONE collective – an artistic group based in Rome that moves on the border between art, design and technological research, founded by Gregorio De Luca Comandini, Mauro Pace, Saverio Villirillo– is pursuing its investigation into the human dimension, the machines that explore physical space, virtual and unconscious, using technology to reflect on the daily condition of human beings not in an anthropocentric vision, but by offering the viewer an opportunity to reflect on the present and the near future.

Their new work J3RR1. Programmed Torture is a normal machine, like many others. It is a computer programmed to carry out a constant stress test, i.e. a hardware performance test, a benchmark. The hesitant J3RR1does what it is designed to do: strives, stresses to verify its performance, in the constant search for improvement of its performance, without knowing what is the purpose, the meaning of its work.

J3RR1. Programmed Torture was on display until July 1 in the section “Human, superhuman?” curated by Valentino Catricalà in partnership with Fondazione Mondo Digitale for the Roman edition of Human +. The future of our species at Palazzo delle Esposizioni, curated by Cathrine Kramer, for an exhibition conceived and presented for the first time by Science Gallery at Trinity College Dublin. 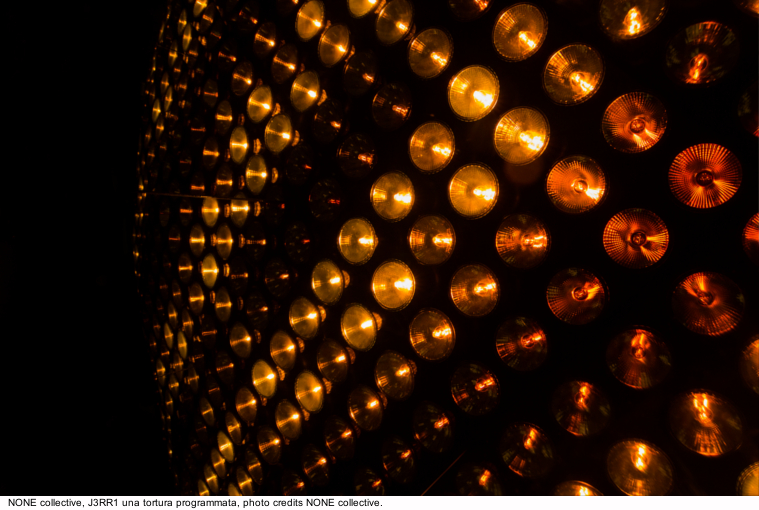 Marco Mancuso: Could you describe your new project J3RR1? How did it come about and how does it fit into the general development of your research at the intersection of art, design and technology? What kind of feedback are you receiving as a result of the exhibition in the Palazzo delle Esposizioni?

NONE collective: We have been working on this kind of research for several years now. It is also one of the reasons we organized Simposio, a series of conferences, performances and installations aimed at examining the relationship between human beings and machines. The Simposio took place between January and May, all the meetings were open to the public and were organized for artists, critics, art historians, hackers and simply anyone interested in the topic. Very often the relationship one has with machines is a combination of curiosity and suspicion, since the machine in this case usually represents above all a means of domination, a form of both physical and cognitive control.

In case of J3RR1 we went further and tried to invert the “common” point of view and position ourselves as spectators of the machine. The same kind of position one has when observing nature, which is usually easier to identify with and towards which one is able to feel empathy and can even imagine having a soul. But how do we act in front of an artificial subject? J3RR1 is created by a human being and that is what makes it artificial. It is an ordinary computer, a small laptop Asus, equipped with a CPU, a RAM and a hard disk. We asked ourselves whether it is possible to empathize with a machine, and that is how this work was born.

Regarding the feedback, visitors at the Palazzo delle Esposizioni and Italian museums in general are not accustomed to interacting with art works related to the digital world and machines. That is why the feedback was a mix of scepticism and annoyance, but also interest and curiosity.

Marco Mancuso: Could you talk about the idea of stress testing for an audiovisual system that you’ve created: what is the subject of this project and why have you decided to concentrate on this idea?

NONE collective: We came up with the idea of stress testing since we were trying to find a way to empathize with a machine. How can a human being identify with a machine? We found points of contact with our everyday life and subjected the machine to the conditions of “programmed torture”, which in some way is a metaphor for our life, during which we often try to reach objectives for which we don’t necessarily understand the sense. We spend our lives in constant stress, always trying to improve ourselves and our performance.

That is why we decided to subject J3RR1 to a continuous stress test, a programmed test of the performance of the hardware, the CPU, the RAM, the memory, a sort of a benchmark that is usually used in order to assess a computer’s “skills”. Every morning, as soon as the museum’s staff switch on J3RR1, it startsworking and getting stressed in a planned way.  The calculation grows with no particular function and leads to an increase in the RAM, the CPU, and the writing of the hard disk in a cyclic manner every day. 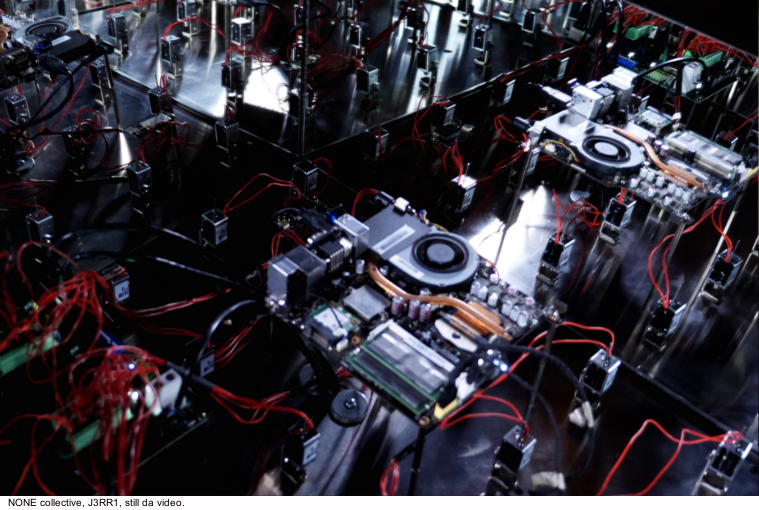 Marco Mancuso: There seems to be a direct relationship between a machine’s corporeity and the bodies of the spectators in front of it. The technological system is considered a living being, made of circuits and algorithms, subject to effort and illness, malfunction and fatigue, while people who interact with the mechanism are crucial elements of the work, since they are in a “dialogue” with the machine from the corporeal and sensorial point of view (they feel the heat coming from the machine) …

NONE collective: J3RR1 is equipped with two devices, one visual and the other audio, that have been integrated and are aimed at monitoring the vital functions of the machine. Similar to how a doctor uses a stethoscope with a patient, we analyze the vital functions of the machine using these two sensors, one in the front and one in the back. One of the sensors is connected to a light source: its intensity (heat) varies depending on the changes in the RAM and CPU, while the sound is connected to the writing of the hard disk. The two devices have been inserted inside the two truncated cones with a square base covered with mirrors. That is how the optical illusion known asquadrisphere is created. When a spectator sees J3RR1, he or she will have an impression that the round and luminous volume is much bigger than the space where it is situated.

While looking at the quadrisphere, one sees his/her reflection. The astonishment caused by that often generates the necessity to use another machine, one’s smartphone, in order to take a picture. A dialectic between the machine’s reflection and the human being’s reflection is created. The relationship between the two elements can be of various nature: some people are disturbed by the sound and light impulses and become subject to the same torture, while others empathize with the machine and stop perceiving it as distant. 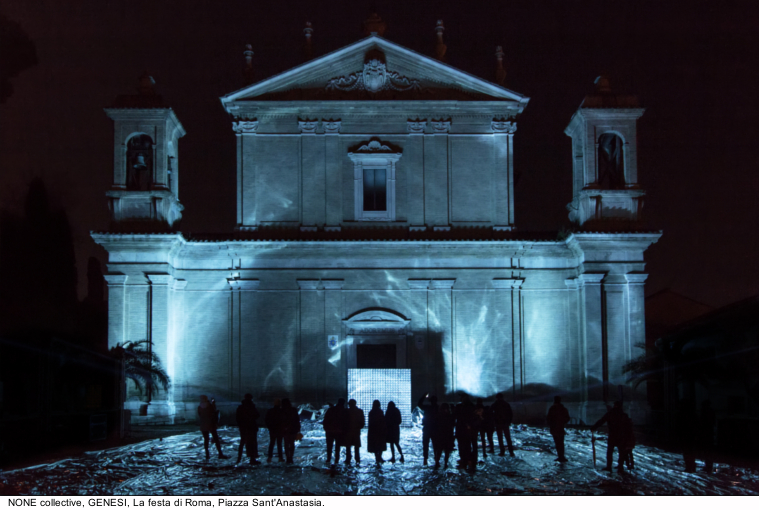 Marco Mancuso: Is it possible to empathize with a machine, as you yourselves claim in the presentation of the project? After years of work on and experience with the relationship between human beings and technology, how do you answer that question?

NONE collective: The relationship between human beings and technology is a relationship that each of us inevitably experiences. From a certain point of view, it is definitely positive: the use of technologies has simplified and accelerated our lives, it has given us many new possibilities. The question is whether or not this acceleration represents an added value for human beings, liberating us from some of our burdens and giving us more freedom, more free time we can dedicate to our passions. But if the creation of the added value (composition of a musical piece, writing a poem or a recipe for a dish) becomes a task of the machine as well, the machine loses its initial sense. If we give the machine the task of filling the time that is supposed to be dedicated to our passions, it becomes a sort of dependence for us as well as a waste of the potential of the machine. It means chasing the machine instead of using it in order to make our lives easier. How can we avoid this? The key is in the awareness that one should have when using machines. It is all about a continuous exercise that would stop us from falling into a trap of infinite comfort, that would allow us to get outside the bubble and develop a critical approach, that would make us aware of the border between these two conditions.

Marco Mancuso: Let’s talk about the mirror and about the identity relationship that is being formed in the J3RR1 between the human and non-human: an image reflected by a biological element inside the technological ecosystem. Anthropocentric vision disappears and is substituted by a machine approach that explores the world around it, its relationship with things and other living things. Why did you decide to work on this element? Poetically and artistically what potentialities do you see in this topic?

NONE collective: We all have a strong relationship with machines, so it was very natural for us, since we all talk to machines, insult them, we love them if they work, hate them when they don’t. The potential of research on the topic has no limits. One encounters the same aesthetics in representations of dystopic futures, such as in cases of Blade Runner and Black Mirror. However, often in these cases, the machine is considered a substitute, a surrogate of the human being, something that is similar to us and that can easily supersede us, while J3RR1is visually different. It is an object, almost a design object, that doesn’t resemble a human being. In terms of research, the aspect of an error in the machine, the so-called glitch, has been explored a lot, while we are mostly interested in examining the identity of machines. 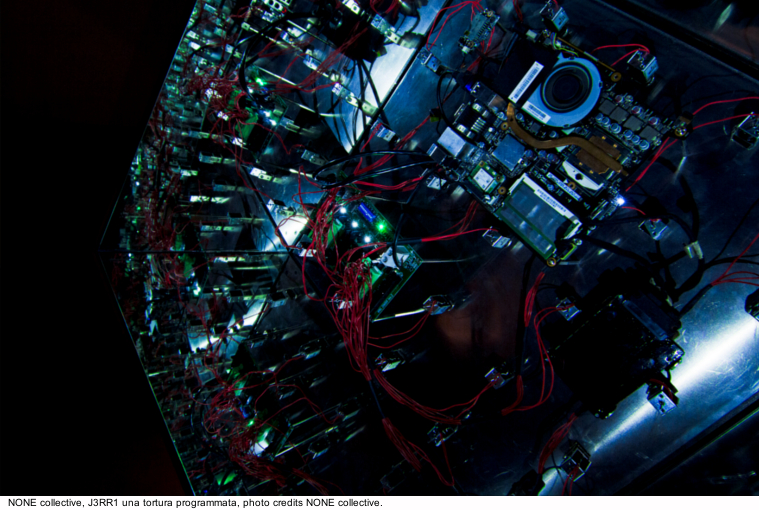 Marco Mancuso: What potential do you think J3RR1 has in terms of set-up and market? Do you think in terms of the contemporary art market it is best suited for set-ups, exhibitions or collecting? Do you think it could also have an installation or ambient purpose?

NONE collective: J3RR1 is the result of a formal synthesis that we’ve been working on for some time now. Usually we create big immersive installations, while J3RR1 could be defined as more of an art and design object. So, from this point of view, yes, it can be placed in spaces dedicated to art, it can acquire marketability, it is sellable. And this aspect is certainly new for us, even though it remains combined with a more performative quality that is common for us. It can be placed in any space. Right now we are working on placing it in a space where it could create a dialogue with the context in terms of light, sound and any other effect we might think of. 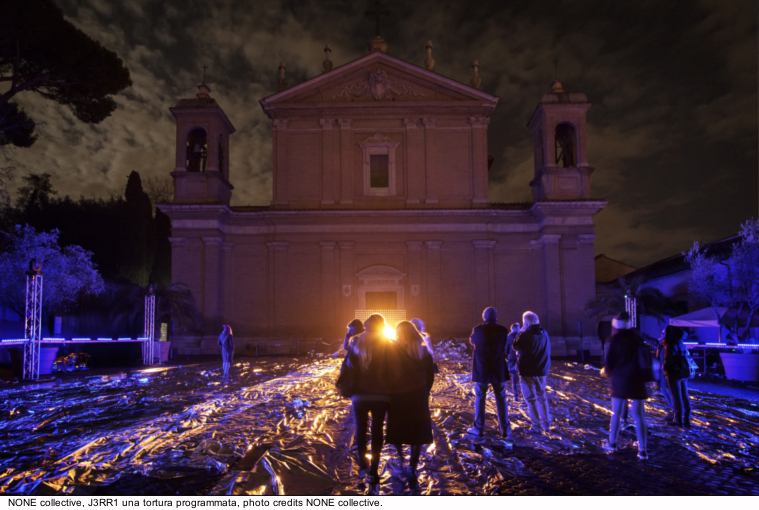 Marco Mancuso: Tell us about your next projects. It seems to me that at this point the general idea of your research is to “separate” your artistic activity from your commercial activities and from research and to present the public with an image which is the result of integrated and organic research…

NONE collective: Yes, you are absolutely right. Soon, in September, to be more precise, we will be going to Brazil with a project funded by MADAI art, which will be presented in the spaces of Farol Santander on the occasion of theContemporary Art Biennial in São Paulo. On that occasion, there are going to be two spaces dedicated to immersive installations: one of them will be occupied by a Brazilian artist, while the other one, meant for international artists, is where we will present our work, which will be on display for three months. At the end of September, we will be exhibiting at home, in Rome, where, during Romaeuropa Festival we will present GENESI in the Sala Santa Rita.

With regards to our direction, over the years we’ve grown and become aware of the necessity of continuing our research in order to give continuity to our artistic path. Therefore, we create works that reflect our aesthetic, but at the same time we haven’t lost the ability to create projects on commission. We always try, even with important commissions, to preserve our voice and to lead our client towards a more evocative and artistic experience.