Gmaybe: Be Free, Be Public! What Future For Privacy? 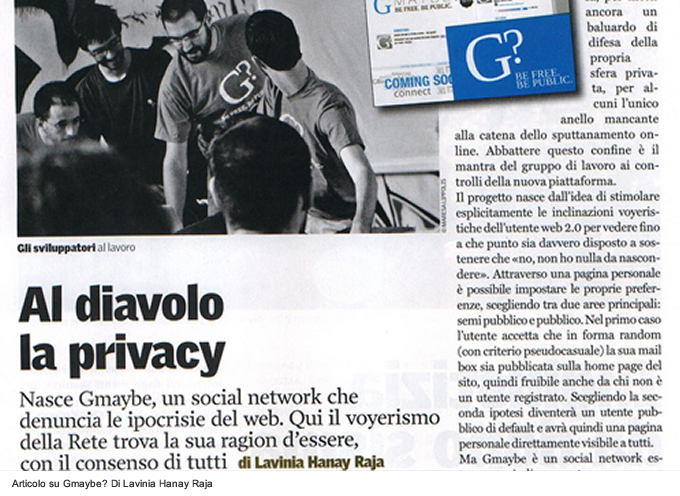 You may have recently happened to witness the presentation of a new online service. Two young men wearing a t-shirt with the Gmaybe? logo show the exciting benefits of the new frontier of social networks. All the rhetorical promises related to technology are there: “they tend to fall into four main categories: democracy, freedom, efficiency and progress. Democracy looks like what everyone will enjoy using the new technologies, thus increasing its own influence on the social environment […] Freedom is usually presented as the absence of socially restrictive elements “(Critical Art Ensemble, The Molecular Invasion. Biotech theory and practices of resistance, Eleuthera, Milano, 2006, pp38-39).

This new service seems a simple e-mail account available via the Web through an interface reminiscent of the Google graphics. But the advantages are others: through a personal page it is possible to set preferences: between semi-public and public. Choosing the first option, the user accepts that, at random, his own inbox is published on the homepage of the site and so it will be directly accessible even to persons who are not registered. Choosing, instead, the second option, the emails become directly accessible to everybody. Each member may also
comment on the correspondence from other users, vote for the favourite messages, create pressure groups or groups of admirers.

It seems that the last bastion of defence of Privacy has collapsed: even emails become something public! This service will probably be besieged by the totally addicted social networkers. This presentation was held in Milan during Hackmeeting 2009. It is therefore an extreme experiment of Web 2.0, which certainly targets the social networks but calls for a reworking of the idea of privacy in relation to the declination that is often made in the hacker scene. To do this, the authors of Gmaybe? have decided to step into the shoes of those who manage these services, to investigate how and to what extent the common people are willing to change their idea of privacy. 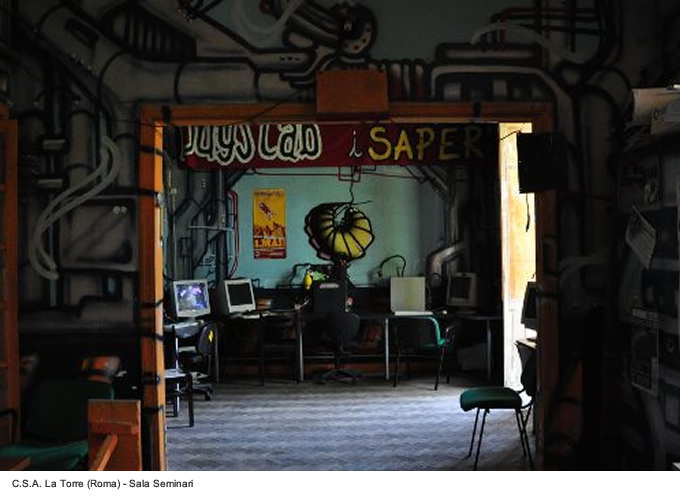 This year, Hackmeeting 2010 will be held in Rome from July 2nd to July 4th at C.S.A. La Torre. Andrea Marchesini (aka Baku), interviewed for GMaybe, talked to us about a new job related to the implementation of different forms of social networking, which will be presented during the annual gathering of the Italian hackers this year and on which we will keep you updated

Loretta Borelli: At the subscription to Gmaybe? the users are told to use the email account released as their sole one.. This is to test their willingness to make public all their correspondence. Despite the most popular social networks which push for the publication of any private content, there still is a common view that the email must remain a privileged realm for the defence of privacy. But it seems to be a form of induced defence and not a conscious attitude. So what’s your idea of privacy? Do you think your ideas in this sense are different from those of the average users?

Andrea Marchesini (Gmaybe?): First of all, Gmaybe was born as a provocation. Both Carlo and I, come from the Italian hacker scene. Speaking for myself, having been part of many groups politicized and non-politicized,
privacy is an issue I care about particularly. But I think the concept has changed considerably over the last 5 years. While before privacy was a container where you could put static and sensitive information, personal data, reports, communication modes, etc., today I think it is perceived more as a rather fuzzy graphic. Let me explain. I think people have started to sell some pieces of personal life in exchange for something else: membership in groups, use of tools, new features, new faiths, many things the web2.0 gave us as a present.

This means that what for one is inviolable, for another could be a semi-public data. Then I like to think that privacy (as well as something to-defend-) is dead. We need to re-create it, restarting from what now exists, from what people perceive as real: personal relationships associated with social networks, the use of mobile phones, exchanging messages via email or other things. We need to create it again, starting in the sense of giving it another meaning, another definition. But starting from the individual, from what each person feels he is able to give and do.

I started getting Interested in this subject when I approached the FOAF project. Then from there, I started to deal with metadata, processing, statistical studies, so studying how a person moves within a site, the network of relationships, which and how many footprints he can leave and how to connect them. You probably know I also worked on privacy through some open-source projects (Scookies, Bproxy). Yes, Gmaybe was born as a provocation and as an aggravation of social networks to see how it is possible to lose control of one’s own communications. To understand what the limit to the personal sphere is. As you have said, the mailbox has remained relatively private until now (ignore for a second Gmail and Google TOS on the use of users’ mailboxes). Thus Gmaybe was born as a game. 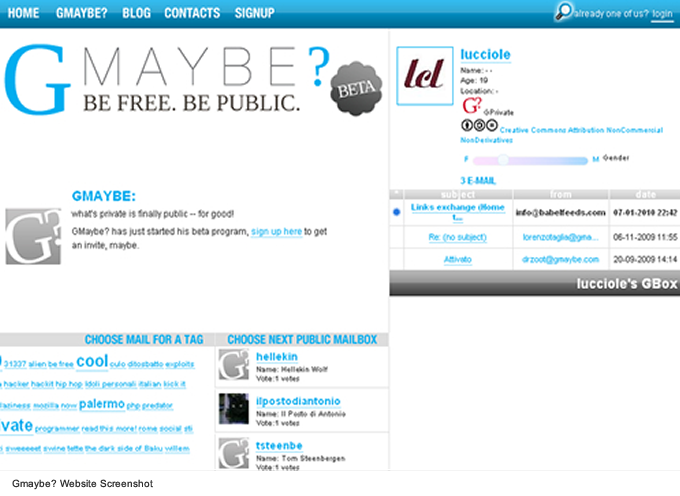 Loretta Borelli: In Gmaybe? is it possible for users to comment on the correspondence of other users, to vote for their favourite and create pressure groups. So, in addition to the mail account, it provides all the tools to be “social” and viral. Do you think the rigid definition of the social relations was crucial to the success of the popular social networks?

Andrea Marchesini (Gmaybe?): I see a fairly linear trend in the attempt to let sites be visited as much as possible:

– Information sites: users follow my site because there is interesting information (blogs).

– Web services: users are on my site because they use a service (mailbox, online search engines)

– Portal sites (there are still many) sites where you “should” be because they give you an infinite number of possible routes.

– Social networking: sites where the user is because there are other users

Some time ago I addressed this issue with some members of the Ippolita group. In particular, we were discussing the reality of social networks compared to the ones of video games. For example: Tetris is a world where there are objects of simple shapes, strictly 2d shapes, which fall-down and can be moved and rotated. We all play at it without asking questions about, for example, gravity, three-dimensionality. Or Who drops the pieces? Who moves the pieces? This is the game, it has its rules, we play and enjoy it. Moving this topic to the social networks the same thing ..There is a logic that is not comparable to reality, there are few rules, and people follow them and enjoy themselves.

Nobody makes an issue of the fact that relations between people do not have cardinality, that there is no time factor, that there is no space. It’s all an eternal present with very few modes of communication and lack of structural changes. Perhaps this is why they are so trendy , why they are considered to be nice games. If they are too complicated (SecondLife), they fail, if they are too simple, people gets bored, or they cover only niches of audience. The viral aspect is essential in order to create a critical mass and then “import” the community onto the social networks. 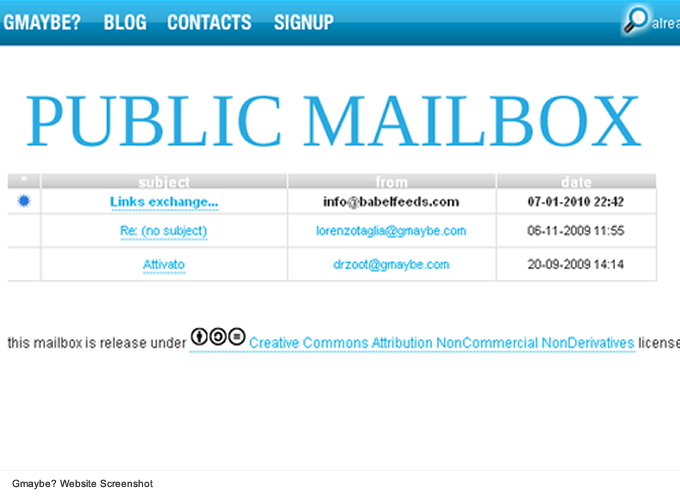 Loretta Borelli: The emergence of an interest so alive for the individual within these platforms, and an illusory possibility of expression of individuals, has created doubts about the idea of the network as a

horizontal non-hierarchical form of democracy. Do you think that the idea of the network still has a non compromised potential?

Andrea Marchesini (Gmaybe?): I am not an expert on the forms of power but I am Absolutely fascinated by them. For this reason, I am looking for a democratic form of power. Unfortunately I have not found it yet. The communities in which I’ve been involved (some social centres, some distributed communities, hacking communities) were strictly hierarchical (you know that there is informal hierarchy where there are classes of individuals with one or few leaders). I do not think the problem is a lack of democracy, indeed, I think that hierarchy is often helpful and in some cases essential.

I personally like it when meritocracy allow its birth. I think social networks have enough rules designed to prevent the creation of complex hierarchies. Limiting communication modes or
multiplying / differentiating the inputs are two good methods to complicate the emergence of complex forms of organizations.

At the most we see affinity groups or opinion leaders on networks like twitter. So I’d say not, social networks are not interesting as forms of social organization. This does not imply that what is inside could be the same out, so that the network relationship of individuals can lead to unexpected results also through these tools.

Loretta Borelli: Gmaybe? offers a mail account, so it uses an email protocol, but it is a web platform with a simple and immediate interface as that of other platforms and social networks. In these cases, the interface facilitates a process that leads users to put aside the idea that there is a company behind a free service. The set of tools that you developed leads users to identify the community beyond those who manage it. This seems to be an implicit criticism of the silent control of many Internet services, but your intentions are not clearly explained in your site.

Andrea Marchesini (Gmaybe?): We had a lot of fun trying to look like a real company. We also created a fake page dedicated to available job positions. We did it because we wanted to appear just like a social network, like any other serious, reliable business. 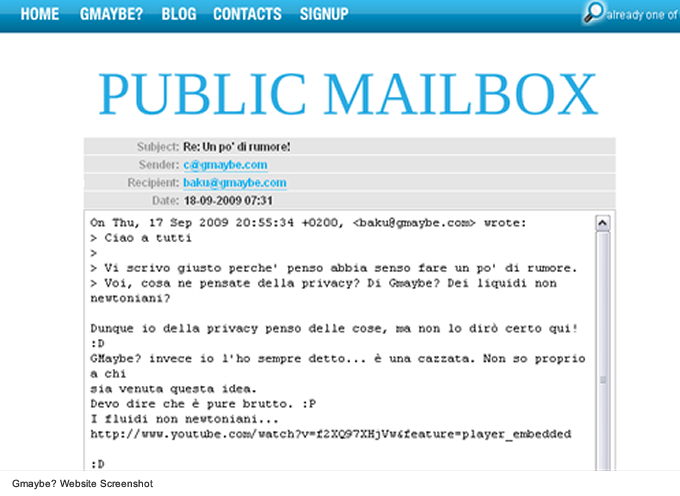 Andrea Marchesini (Gmaybe?):I think it self-learning is essential. Especially with regard to the Internet and the new communication tools, it is essential that people are aware and can control and manage the instruments proposed. This is essential for several reasons: to interpret the events in a critical and responsible way, to imagine an accountable future without accepting passively the inputs of large economic groups and politicians.