Korakrit Arunanondchai at the Museion in Bolzano

Museion presents the first solo show in Italy of the artist, Korakrit Arunanondchai (Bangkok, 1986). Under the aegis of Buddha, but also that of Steve Jobs, the artist’s multidisciplinary practice encompasses film, photography, installation and performance, freely intermingling past and present, fantasy and reality, science and spirituality.

His works explore the reception of Western art history, but above all memory—both individual and collective—in the age of digital communications. His perspective is that of a digital native and cultural emigré, having moved from Thailand to the US in 2009.

Having studied at the Islad School of Design (2009) and Columbia University (2012), Arunanondchai has featured in numerous group shows at institutions like the Sculpture Center, New York, and ICA London, and has had solo shows in Palais de Tokyo, Paris (2015), and MoMA PS1 (New York, 2014). Apart from the exhibition at Museion, Korakrit Arunanondchai will also be appearing in the Sydney Biennale (March 18–June 5) and the Berlin Biennale (June 4–September 18). 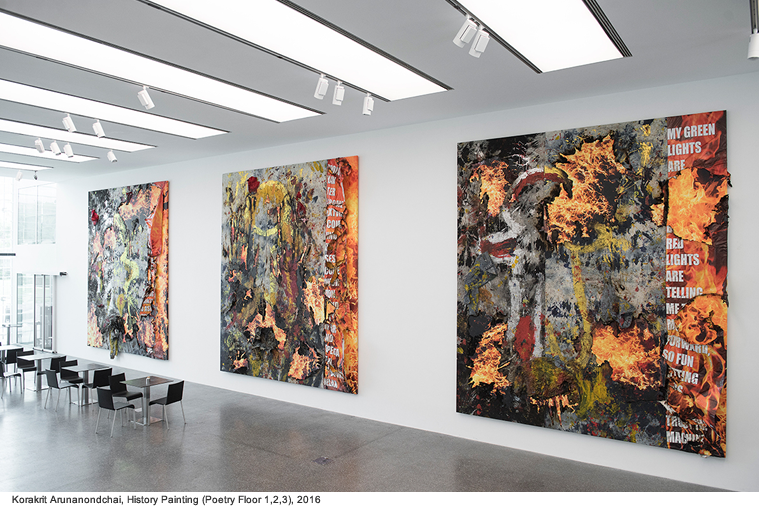 The show kicks off on the ground floor of Museion with three large History Paintings, paintings on denim that the artist works on in various stages, overlaying the fabric with a digital print that shows it in a previous state of combustion. In these processual works, references to abstract expressionism mingle with the modus operandi of digital art in the days of Photoshop—deployed by an artist who learned to paint using Microsoft Paint. The History Paintings, framed and displayed on the wall, are interspersed with a number of drone-like installations (3-D printed masks with drone parts).

The tour continues with videos and installations—including several new works—on the fourth floor of the museum. Here the artist creates an enveloping immersive experience: using special filters the glass facades and ceiling-mounted lighting are transformed into coloured surfaces that turn the entire exhibition space red, yellow and blue, the three colors that Arunanondchai uses in his body-painting performances, inspired by the “boob painter” from the TV show, Thailand’s got Talent.

The exhibition revolves around the video Painting with History in a Room Filled with People with Funny Names 3 projected onto a large led wall in the centre of the room. This video is an epilogue to the research Arunanondchai began in 2012, and is part of a series—a sort of Bildungsroman focusing on the apprenticeship of a painter, The Denim Painter, who is the artist’s fictional double. The identity of this figure is forged by globalization, but also encapsulates the social and spiritual reality of Thailand. 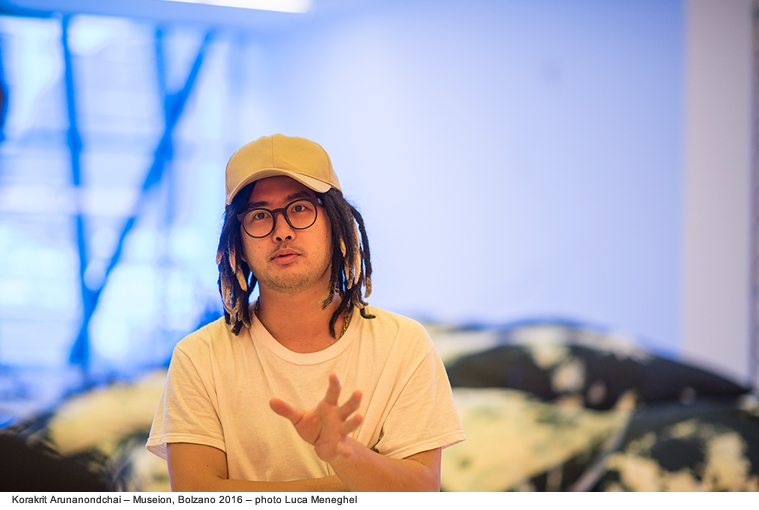 To watch the video, visitors are invited to lounge on comfortable denim cushions. The light from the outside, filtered by colored films, adds to the immersive experience that the artist wants to give the public.

The exhibition also presents the other videos in the series: Painting with History in a Room Filled with Men with Funny Names 1 and 2012–2555 (part 1 of the trilogy). The futuristic visions in the videos also have a sculptural counterpart in the shape of the new works created for Museion, Untitled (grounds). Presented on vertical panels, they consist in layers of different materials and fragments of humanoid robots, with a distinctly sci-fi feel. The show also features a number of new installations, created using assemblage and combustion.

The exhibition is curated by Letizia Ragaglia. A catalogue will be available in three languages (Italian/German/English) with texts by Flora Katz and Letizia Ragaglia, and an interview by Carol Yinghua Lu of the artist.