Rip: A Remix Manifesto. A Specter Wanders In The Net 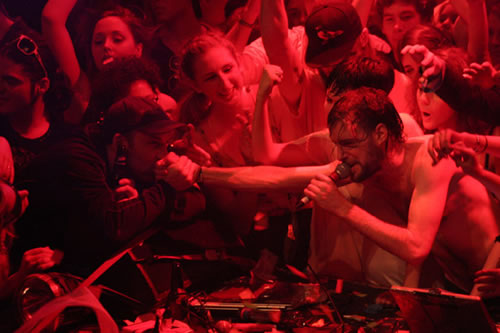 Documentaries are often boring, especially when you consume something that insistently defines itself as a “good” thing. I don’t believe however that RIP: A remix manifesto (USA/2008) falls into this category, probably because they share the view of the bottom.

A by Marx and Engels to define a true Weltanschauung, the creation of a common front to share cultural and political claims. To paraphrase the famous beginning of of the manifesto of the communist party, one could say about the documentary directed by Brett Gaylor: “There is a spectre haunting thenetwork.”

Overall, the documentary of Canadian Gaylor is an instructive overview of some of the key issues and
opportunities in the culture of the ‘copyleft’, an investigation into the changing paradigm of cultural products that
most political and legal institutions still struggle to assimilate, but which have become commonplace and vital tools of expression for millions of individuals around the globe.

The title is quite explanatory, ‘a remix manifesto’. This means that thefilmmaker focuses on the concept of remix culture, explaining the restrictions in different legal systems (U.S. and Canada) and the emergence of a new
generation of workers.

Gaylor looks at a culture of copyright. The first words the director speaks put in perspective the whole subject: “This film is about a war, a war of ideas. The soil of this battlefield is the Internet ….” He creates drama by
using for the metaphor of war supported by the frequent use of slow motion, with the result of more stress and overload in their statements.

“A specter is haunting Europe – the specter of Communism…”Substituting the famous “public domain” to “communism” and “internet” to “Europe”, you can see the desire of the director to build a complex view of copyright, and how it is canceled and criminalized by different legal systems.

Lowrence Lessig says: “The isse of copyright as it stands is producing a generation of criminals” and would be willing to broaden the discussion to any form of prohibition. second Gaylor remix of the manifesto:

1st The culture is always based on past

2nd The past influences the future

4th To build free societies is necessary to limit the control of the past (ie extending the free movement of knowledge).

The rhetorical device used to articulate the narrative of the manifesto is simple and there are quite interesting results in one specific specific case (Girl Talk DJ and producer champion of the practice of mashup: cutting and sewing of samples of pre-existing music) to broaden the discourse by making it universal (the free movement of knowledge is an instrument of culture and culture makes it free).

But we go back a moment. Rewind the tape, cutt and hit record. RiP: A remix manifesto is a documentary made on multiple levels. First is the material collected over six years by Brett Gaylor, second is a documentary of the period of eighty minutes in the past of the most delicious festivals: Tribeca, International Doc Festival in Amsterdam, Club Transmediale, AFI Dallas , Dokfest of Monaco, Stockholm, Barcelona and Rome LPM. It is also a series of visible and downloadable videos online, a platform (available from one of the other projects that boil in the head
of Gaylor: opensourcecinema.org) to sharevideo material to stimulate audience participation in the
construction of a new extended version that will go live in . All this of course published under Creative Commons
license.

Girl Talk is a paradigmatic case, a bug in the system that has materialized in the body and mind of
a young biomedical engineer in. But the U.S. Congress has been asked to make a legal definition of these actions. This, therefore, is the point from which Gaylor begins illustrate the four ideas of the manifesto of the remix culture, to be respected in music, film, and then finally by the more general point of view of culture.

Candidates interviewed are important, and lead to interesting discussions and documentaries, starting with
one of the fathers of contemporary knowledge sharing: Lowrence Lessig. There is also media guru Cory Doctorow, the former Brazilian Minister of Culture, the music legend Gilberto Gil, Mark “Negativeland” Hosler, who pioneered motion image sampling and was among the first to challenge the logic of copyright, the legendary independent cartoonist Dan O’Neill who in 1971 attacked the Disney empire with publication of the comic series Air Pirates Funnies, and many others.

RiP belongs to an emerging genre of contemporary documentary that today comprises a small body of excellent work but that is rapidly and steadily growing. A genre that troubles the concept of intellectual property and is hard to relate to by institutions, a conflict that is denied by those who hold property rights and denies the scope of the cultural revolution that the network has made available to millions of individuals all over the world.

Sampling, remix, public domain, copyleft and cretive commons, these are the issues. Titles such as Good Copy Bad Copy – a documentary about the current state of copyright and culture by Andreas Johnsen, Ralf Christensen, Henrik Moltke (Danimarca/2007) and Steal Steal directed by the collective 2 have alot in common with gaylor’s documentary. The league of the noble peer (respectively in 2006 and 2007) give an account of the historic battle in the course of conduct. All of these documentaries are freely downloadable and visible on the network.