Considered the “world’s fair” of computer graphics, the SIGGRAPH conference was held 12-16 August 2018 in Vancouver, British Colombia at the Convention Center, located downtown at the waterfront. Every summer, SIGGRAPH is held in a different city, to present the highest level of creative technology, and research on the latest techniques of interactive, animation, VR, gaming, and real-time graphics to a global network of practitioners/users, developers, educators, students, artists and scientists who listen, discuss, experience, interact, engage, present, question, and reveal new ideas.

It is on the one hand a noisy, active trading-demo space and on the other hand, a contemplative series of technical papers and courses. Entry level – as well as pioneers of computer graphics – come together for a mash-up of the best of the field. Since 2008, SIGGRAPH Asia has been added to the annual SIGGRAPH conference program, and Eurographics is the European version, but with a smaller program.

SIGGRAPH (Special Interest Group on Computer GRAPHics and Interactive Techniques) was first convened in 1974, in Boulder, Colorado. At the time, computer graphics was a new field, and few scientists even knew what graphic solutions were possible using computers. Since 1981 an Art Gallery has been part of the official SIGGRAPH program. Together with Ray Lauzzana, Gerbarg searched out work this first Art Gallery which featured 45 artists. 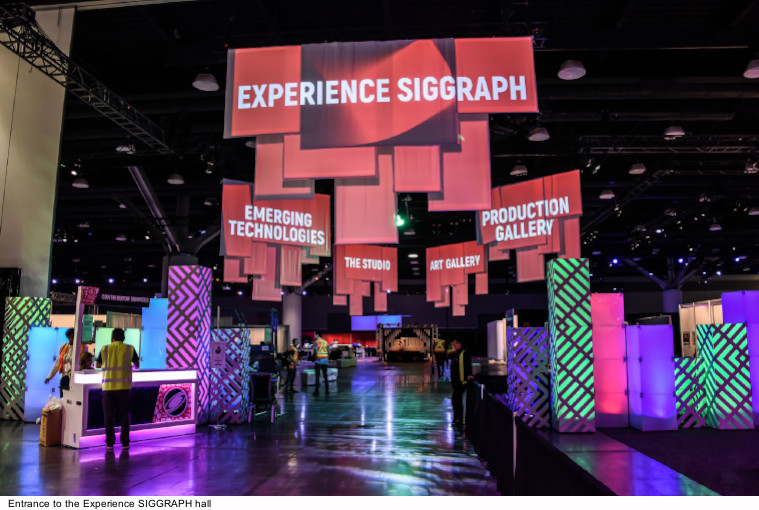 As a young curator, I heard about this early SIGGRAPH art exhibition from artists and was inspired to learn more about artists and computers. My first SIGGRAPH was in San Francisco, when I served as a juror for the 1985 Art Gallery which showcased 160 works. Since then, I’ve attended conferences as a juror, organizer, presenter, and critic. Every SIGGRAPH for the past 39 years has included an Art Gallery. Some years have featured more than one exhibition.

The curated exhibitions bring together specific invited works that support a curatorial research focus, who would not usually consider SIGGRAPH a priority. The “open call”, a juried exhibition, appeals to a wide number of artists, many who do not find satisfaction in the mainstream art community: SIGGRAPH is their target audience. The curatorial and jury process is competitive, and acceptance in the SIGGRAPH Art Gallery is widely considered an academic achievement.

Curated by Andrés Burbano (Associate Professor at the Universidad de los Andes, Bogota, Colombia) the 2018 SIGGRAPH Art Gallery was entitled Original Narratives. It was situated within the Experience hall, an active section which features emerging technologies, the production gallery, the studio, and the Art Gallery; seamless encounters with only curtains or temporary walls separating the sections. Burbano’s selection of twelve artists drew inspiration from – and especially embraced – narratives of the indigenous communities near Vancouver and throughout Canada. 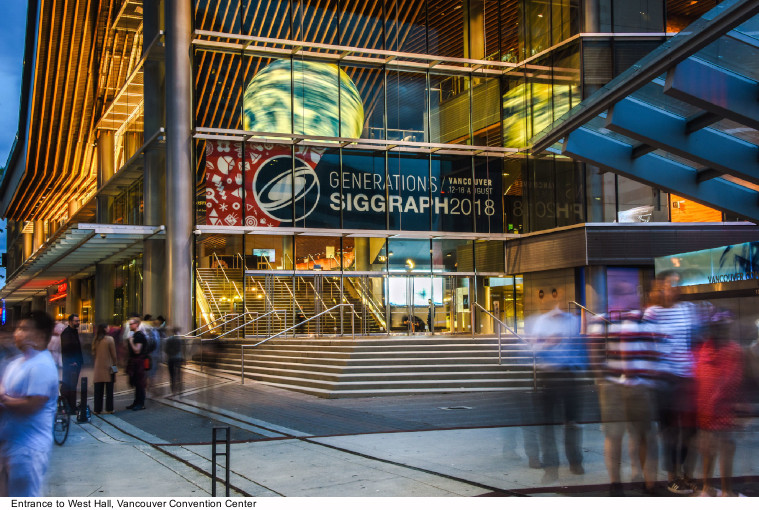 Burbano cited examples of how the “creative practices mediated through technologies” allows for new narratives to be told (and understood by others). This group of works provided an insight into investigations that are otherwise outside the radar of both the technology and digital art community at large. Burbano worked two years to organize this year’s Art Gallery, a concept which grew out of his earlier experience traveling among indigenous communities in Northern Canada. The awareness of the importance of storytelling and subsequent inclusion of indigenous mythologies was clearly present, and impressive.

Burbano’s research was an open-minded approach to Original Narratives and included works that were both entertaining and immersive, as well as historic. The entrance to the Art Gallery highlighted Ernest Edmonds (UK), winner of the 2017 Lifetime Achievement Award in Digital Art. Four of his pioneering works: Nineteen (1968), Datapack (1969), as well as Communications Game (1972), were presented alongside Shaping Form (2002). These early works all relate to papers Edmunds has published in the Leonardo journal since 1973. Edmonds, whose work is minimal at first glance, follows the constructivist tradition. He has been a central figure in the computer arts community for four decades, and has exhibited his work internationally at prestigious festivals, institutions and museums: a definite reference to GENERATIONS.

The most visible work at the center of the Art Gallery was Haven, an immersive installation by Alex Beim, Creative Director at Tangible Interaction Design Inc, Vancouver, B.C. A glowing, white, inflatable structure, an organic arrangement of bulbous shapes looking something like a futuristic igloo, invited conference goers to enter a tranquil space, a womb-like experience, as “…it recalls our origins, where it all begins.” It required participants to crawl on the floor into its low entrance but offered possibly the only quiet spot on the exhibition floor, and a chance to escape a noise level that challenged concentration most of the time. 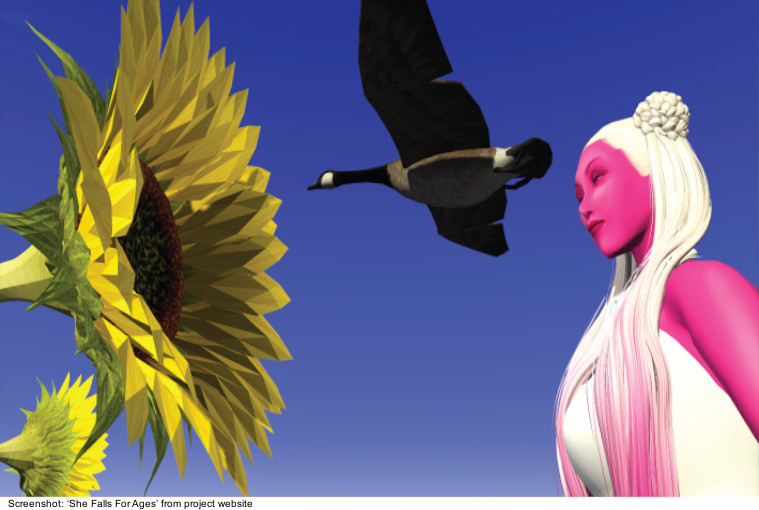 She Falls For Ages, an animated “short film” by Skawennati, a Mohawk multi-media artist based in Montreal, was projected in a space of its own, with seating. A favorite of this writer, She Falls For Ages is the retelling of Haudenosaune (Iroquois), a creation story set sometime in the far future where the heroine Sky Woman volunteers to save her planet, leaves her luxurious heavenly community, and falls to earth where she begins a new world.

The unique animation was created entirely using the technique Machinima, and constructed entirely inside virtual sets using avatars, by members of AbTeC (Aboriginal Territories in Cyberspace). AbTeC, a Montreal based community, was set up to empower First Nation Aboriginal people. Skawennati’s virtual world becomes a futuristic setting for her interpretation of the traditional creation story.

He Ao Hou (A New World) is another product of AbTeC. This work it situates Native Hawaiians in space, in a point and click game. A project of the workshop Skins (Workshops on Aboriginal Storytelling and Video Game Design) it was created by Nā ‘Anae Mahiki, a collective of 16 young adults from Oahu who participated in the Skins 5.0 Workshop in Honolulu in July 2017. In it, the player navigates, and searches for their sister while piloting a spaceship. Along the way they encounter many characters and learn about various societies and customs. 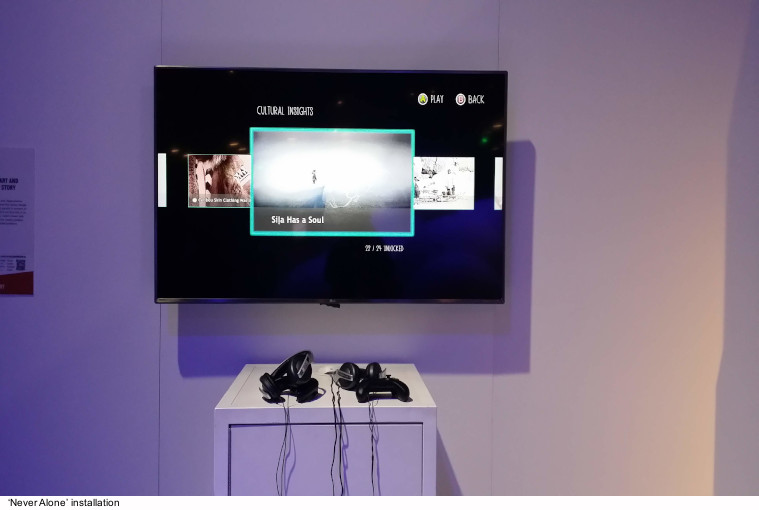 Traditional Alaska native art and tradition is presented in the game Never Alone (Kisima Ingitchuna): The Art and the People of the Story. Developed in a partnership between the Cook Inlet Tribal Council of 40 elders (coordinated by Amy Freedeen), and Oculus VR, E-Line Media (Dima Veryovka), this work is a new genre of World Games, created to bring cultural history to the gaming world. A single player or multi-user experience, Never Alone is commercially available for Sony Play Station.

The story follows a young Iñupiat girl, who with her sidekick (a fox) search for a solution to end a relentless storm that threatens their community. Along the way, many native stories unfurl, traditions respected, and hardships endured. It is softly animated, yielding an eerie illusion of the extremely cold landscape that is fraught with many physical and mental challenges. Players can switch between the two characters to best solve the solutions to the harsh Arctic adversities they encounter.

You are the Ocean, a very popular interactive installation in the Art Gallery, usually had a line-up of eager participants who waited their turn to try the very personal interface. The work was created in 2017 by Ozge Samanci, an internationally active multi-media artist and Associate Professor of Radio/TV/Film, and Gabriel Caniglia, a Computer Science and Cognitive Science student, both at Northwestern University (Evanston, IL). A large projection of the ocean -in its resting state a calm sea with a sunny sky- is the focus of the installation. 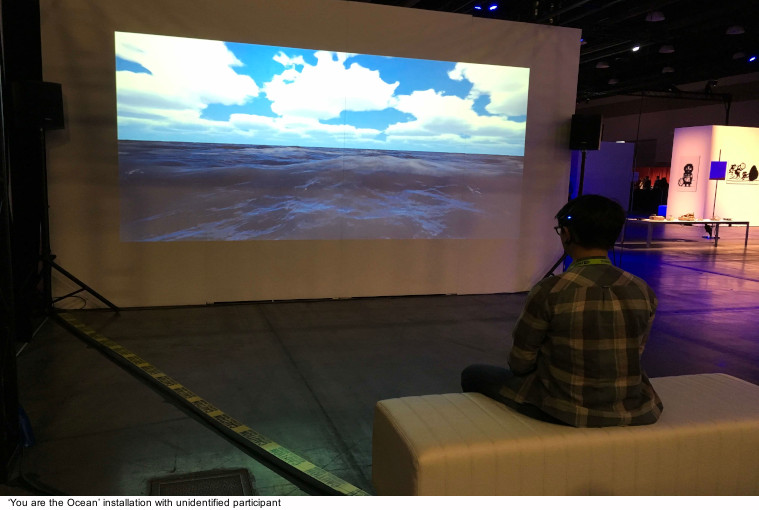 The participant sits a bench opposite the projection, puts on the EEG (Electroencephalography) headset, and concentrates on the video image (which is completely constructed from computer code). Depending on the measurement of the participant’s brain waves, the sky can change from mild to stormy, the water from still to strong waves. The image is affected by the participant’s meditative mindset, “…calming their mind, the subject can create a calm ocean.”

Other artists in the Art Gallery, with interactive works include Transformation Mask a collaboration with Microsoft Garage, Vancouver and Shawn Hunt, an independent artist from British Columbia with Heiltsuk indigenous heritage. An artist who normally carves wooden masks, this partnership provided Hunt a new chance to engage with the “…HoloLens, (which) created an experiential sculpture piece that engages with mixed reality.”

Another multi-user VR work used robotic telescopes in Antartica, INSTRUMENT / One Antartic Night, by Lars Berg (artist), Eitan Mendelowitz, and a group from University of North Texas led by Ruth West. Wearing head mounted VR helmets, several users, in a roped off open space, could be observed reaching into the air to navigate, explore and grasp at perceived spacial objects. The Art Gallery also included several works not drawn from specific indigenous sources. 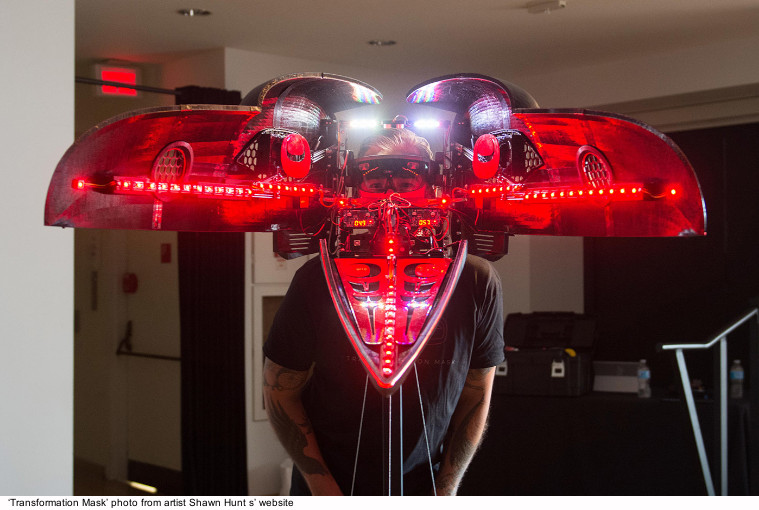 A special partnership between the Digital Arts Community (DAC), and the 2018 Art Gallery was the online selection Origins and Journeys. A contribution of fourteen online works organized by Burbano and Victoria Szabo (Chair, DAC) to accompany the Art Gallery, and juried from an open call by the DAC Committee. An online exhibition is produced annually by the DAC, this latest collection of online works was the first collaboration with the Art Gallery, and was presented in the exhibition, at the DAC meeting point, and will remain online for on-demand viewing.

The presence of artists at SIGGRAPH, included their participation in the Artists Talks (held in the gallery) and as juried academic Art Papers, held in the vast conference rooms, and in the annual Lifetime Achievement Award in Digital Art, this year awarded to Monica Fleischmann (D), further brought artists’ practices to SIGGRAPH.

The Art Papers, and the Art Gallery Catalogue are published together in the Special Issue of Leonardo (Volume 51, Number 4, 2018), an important international MIT Press publication, celebrates its 50th Anniversary throughout the year. The Art Gallery allowed for hands-on experiences with few long lines, and the artists were present to explain their work, many gave short talks in the gallery, and all engaged tirelessly with their curious audience. 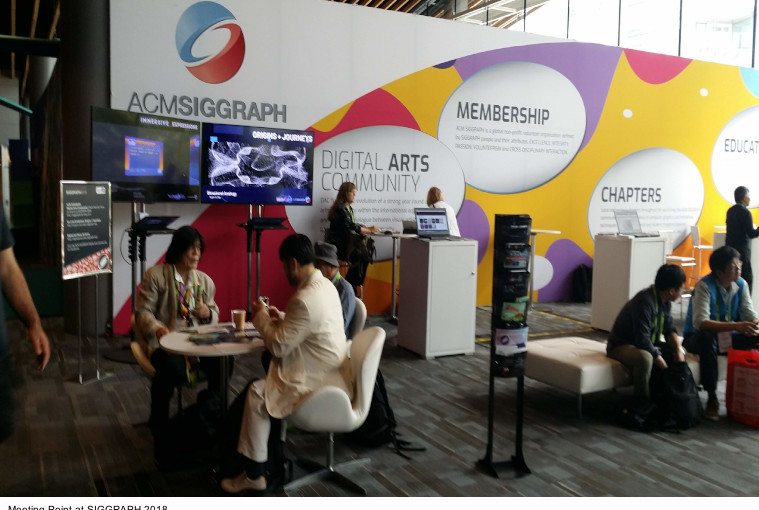 The SIGGRAPH conference will return to Los Angeles, July 28 – August 1, 2019. The 2019 Art Gallery will be a juried exhibition, with works selected from an international Open Call. It will be coordinated by Brittany Ransom, Assistant Professor and Program Head of Sculpture and New Genres at California State University, Long Beach, California. The 11th SIGGRAPH Asia 2018 will take place 4-7 December in Tokyo, Japan, and will include an Art Gallery.