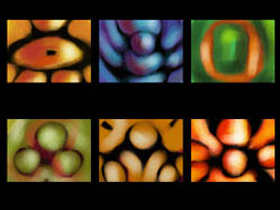 “But a day Eggelin found out the new artistic form suitable for our experiences. This wasn’t nor painting nor music. It was just, we noticed it later, after a work full of fever, cinema! – Hans Richter 1918.

From the Twenties on authors coming from visual arts have started to manipulate the cinematographic language to snatch it to pure narration and reality reproduction: Eggeling, Ruttman, Léger, Picabia address their camera beyond the phenomenal reality, giving the cinema musical rules of rhythm and composition, experimenting the use of the film as material, made up of light and shade. Abstract cinema, which do not tell about and do not show nothing but itself, defined by Rudolf Kuntz “absolute”, antithetical category to diegetic cinema.

Among the historical abstract cinema festivals the last one dates back 1951: one of the shows of the group COBRA , is organized by Jean Raine a Liegi and animated by the works by Fernand Léger, Marcel Ducham , Germaine Dulac, Max Ernst, Luigi Veronesi, Len Lye, Hans Richter, Henry Moore .

This research tendency distinguishes from commercial cinema paths. We can find its fundament in a multitude of expressive contemporaneous typologies extending from video-art to documentary, from digital video to vjing. To sum up the polyhedric reincarnations of the “absolute” cinema, the Roman association Abstracta has given birth, from the 12 to the 17 of September , to Abstracta®2006, Abstract Cinema International Show , which took place in four different places: The French Embassy, Filmstudio80, the Istituto Cervantes and the House of Cinema. The show, directed by Massimo Pistone, has seen the participation of two hundreds of authors, very different for technique and approach to the abstraction theme.

Among the explicit intents of the organisers, I can mention the fact that they didn’t want to create sections within the schedule to remain loyal to the basis laid by Jean Raine at COBRA festival of Liegi. The decision to gather the works proposed in an all-inclusive macro-group hasn’t anyway manifested a clear and original critical interpretation from the organisers of how the cinematographic abstract has configured and evolved within the contemporaneous artistic experiences: it was then provided a thorough historical documentation avoiding the present scene interpretation, elaborated both in critical analysis and in biographies of the artists participating. It would have been useful to build a bridge between the historical event of 1951 and modern productions, manifest a reading key of the changes undergone by abstract and on the meaning this definition assumes now and make the authors selection criteria become readable.

By an autarchic reading of the schedule emerge essentially three visions of abstract. First of all, Abstract as de-construction of linear structure, rendered mainly through editing, used to compose independent visual modules, such as in the work by Björn Kämmer and Karoline Meiberger , Austrian duo author of Aim (2005)ande Escalator (2006) , two videos based on an ironic and destabilising cut’n mix of fragments of b&w movies, which, in their simplicity make the mechanism of semantic de-structuring of the original material explicit. Even in the French video, Paris une réalité inachevé (2005) , (jury ‘s special mention), in which digital composition becomes a collage of visual remnants reproduced in series and edited playfully with the sonorous rhythm to build a pop and multi chromatic Paris.

Abstract indeed as form dissolution: creation of sets different from reality. As in the visionary Contamination (2003) , by the English Carl Stevenson , in a set dominated by a metaphysical nothing, cats-pigeons and men-birds move, hybrids which seem to have flied from a Ernst’s picture into the gloomy bichromy of black and white ink of the video. Abstractism of digital plots are instead the videos Hemline (2005) , by the Italian collective Otolab , and Gestalt (2003) by the German Thorsten Fleish , experimentation and perceptive stimulation works, digitally generated in minimal fractals evolutions.

And last, Abstract as visual poetry: given both from an amalgam of vision and word as well as from mute report of images which, in their presence bypass the verbal communication. The visual verse seem “video-poems” by T orben Skjodt Jensen, Danish artist who from 92 to 98 has realised a triad of works Flâneur , inspired at the life and works of Baudelaire, Calvino and Benjamin, figures emerging from a way of narrating which isn’t narration but discontinuous plots of suspended words, interwoven together by a web of images. Even digital video by Fabio Franchino , Les Neuvelles (2004), seems to want to tell, without voice, the Turin’s prisons corridors, a non place where the vision is blocked against white walls and narration is schizoid, alternating quite still veiling and fading, to loop fixing your look (and life) on the poster with the inscription (“1° BRACCIO”).

The jury’ (made up of Americo Sbardella, president of Filmstudio80, Fernando Méndez-Leite, director of ECAM of Madrid, and Umberto Massa, independent producer), has given the award to the Italian video-artist Saul Saguatti . The winning work, Basmati (2006), represents a meeting/mediation point between the technical-formal solutions of contemporaneous digital, the extemporaneous-musical editing of vying and a visual aesthetics borrowed by the pictorial abstractism of the avant-gardes in the early twentieth century.

It is about images made by hand, digital animated painting that creates loop, and monads edited in feature movies or mixed in live sets. Saguatti achieves “chromatic music”, theorised by the futurists Ginna and Corra. He hasn’t elaborated an original language but he proposes a revisiting of what real experimentation was at the beginning of the Twentieth century, giving it a new process structure: a ninety- year -ago dream carried out thanks to digital technologies.