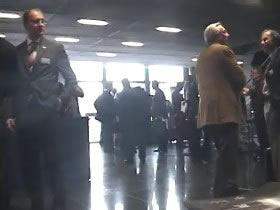 The futurist conference Lucerne, at its second edition, is an annual appointment, which wants to analyze and to document the trends and assessments regarding the studies on the future.

The participants were numerous starting from the futurist associations all over the world, real institutes which prefer the future as a subject of study such as ROOS office for cultural innovation, promoter of the event together with Swisscom Innovations, Zukunftstudien in Switzerland, FutureMagmentGroup (Pero Micic) in Germany, ZukunftsInstitut Matthias Horx in Oesterreich, Swedish Institute for future studies or the Copenhagen Istitute for future studies and also in Italy with Future Concept Lab, in England with Shaping Tomorrow, in France with Futurible Group Paris or the OECD international future programme, to professors and researchers representatives of Universities such as Lucerne, Maastricht, Berlin, Moscow, Alicante, Hamburg, Zurich and also important non-European centre of research such as the Korea Institute of Science and Technology Information, Tama graduate School of Japan, the Non-zero-sum development of South Africa and the representations of the catholic church in Tanzania, of the centre of research in the development in Cameroon and Front Row Nigeria Limited.

But beyond the universities, the future interests the marketing (Casti too will explain this) for example the future concept lab linked directly to the major Italian productive companies; Philips, sponsor of the event together with Swisscom, proposes an interesting initiative dedicated to the playtime of children in the hospitals all over the world  like with the project NEBULA which allows to create three-dimensional projections on the ceiling, because Philips aims at the “Standard of living” with a simplicity peculiar to childhood also in the design, creating real intelligent places which are reassuring both physically and emotionally; intelligent places but also sensitive.

Simplicity was, in Milan too, a meeting point where different personalities of the Italian cultural panorama such as Lella Costa, Bruno Bozzetto, Lorenzo Cherubini and others; they expressed their idea of simplicity and of simply city in direct contact with a various audience.

Not only Philips and Swisscom but also IBM research, Walt Disney and Nestlé, the Schwarovski corporation and Bayer, the Toyota motor Europe, Vodafone, TMobile international, Deutsche Telekom, Credit Suisse and Deutsche Bank. Swisscom has recently launched http://www.cocomment.com a web site which allows visualizing as for the email, all the comments made on a certain subject. The world of the university and the research are in direct contact with the examples of the greatest multinationals.

At the conference there were also companies working in the IT domain, multimedia advisers, import-export entrepreneur and also doctorands in the economies who hope a future in a multinational, many of them are also active player of Second Life thanks to the free wireless given by Swisscom to every participant at the conference.

Everybody is in Second Life. The great companies make their conference as IBM has made recently announcing an investment of 10.000 $ on Second Life and on the three-dimensional graphics; the BBC studies new gadgets for Second Life and invites the users to send suggestions; also Philips has recently announced its presence in 3d and also the artists who reinvent new landscapes such as the last case of the creation of avatar for Second Life by 0100101010010011.org; others sell their products and other simply swim among sharks to jump out and find themselves in an empty room with chairs. Second Life is the first and greatest example of opens source 3d, such as Youtube for the videos where billion of people have built virtual worlds adding their creations.

John L. Casti is a mathematician and his speech on the future must be very logic and on the increase towards the globalization. He starts asking himself simply: what is the future? First of all it’s something of biological, the change is a necessity  Casti defines MOODS the ways of perceiving the future. The events, the social collective actions are called Social moods. The method of judgement of the Sociometer, which gauges the moods according to Casti is largely an economic type, to analyze the social moods we need to observe the financial market. To explain better the situation, Casti makes three examples of three different countries that is the building of towers, an example of building development. The reported cases are the buildings of skyscraper in Taipei , in Malaysia and in Dubai . In every case we can notice how the social mood, that is the feeling for the future, drops at the end of the tower’s building and instead it skyrockets during its building. The building of the tower brought a mood in economic growth that can be identified with Bull while the other with Bear.

Analyzing the moods the social trend is towards the globalization, started in Davos. The globalization is a phenomenon of bull market while the antiglobal is a product of the bear market; the mention in the Medias at the no-global, after the explosion in 2001, is decreased. The growth of the financial market is compared with the birth of the birds in order to return to a kind of pre-European world.

The networking is the main theme of the European Futurist conference Lucerne, meant both in its literary net-working sense, word mostly spread with the wide use of internet, and as real exchange of relations, the networking as opportunity of creating contacts among many people. Three examples of companies, which thanks to internet had an evolution, are presented during the conference. One example is Mibelle, a Swiss company of cosmetics which initially sold only for the Migros but then it has developed its market also abroad and it is in continuous growth.

The example of Oscar open source CAR http://www.theoscarproject.org is also particular; it is an open source project for the design of the cars, a project started accidentally with the realization of a manifesto in PDF and thanks to the net was contacted by eastern companies. The project was born in 1999. In December 2005 it has developed the 0.2 version which will be available in 2006, everybody can participate.

The speech of Penny Power is very interesting. She is the author of the book “A friend in every city” and she speaks about how she stayed at home for maternity from a career in the marketing, she creates Ecademy, http://www.ecademy.com a social business network similar to friendster or Myspace, and thanks to her husband she has contacted million of new prospective customers for her business in a very short time.

The social business network allows the freelances, a social class in continuous growth, to handle better their time, called “freeformers” by Richard Duvall of Zopa. Penny Power defines these new networks SENs (SelfEmployedNetworks) where the freelances can be contacted for new jobs. Beyond Ecademy there are other networks such as LinkedIn, Ryze and openBC (recently changed in Xing).

ahoo in 2000 creates e-groups, which allows the users to create groups with specific interests, allowing the subscribers to receive e-mail, updates on the subject or to insert images with an automated system of email. In her book Penny Power analyzes the social networks in particular the supremacy of Myspace, recently purchased by News Corporations of Murdoch, which receives 14 Million visitors every month, compared with the one million visits of Friendster, its greatest competitor, but also other such as orkut, Yahoo!360°, MSNspaces, the facebook, craiglis t http://www.craigslist.com .

The social networks are in continuous growth but not everyone has a sequel how also Marc Canter of Ourmedia explains in the first of the meetings dedicated to the web organized by the University of the studies of Milan, where he speaks of the 0.2 web and presents Peopleaggregator, a new social network where it is possible also create blogs, load photos and videos independently from its own main web site.

The web interests also the TV, an example is the English BBC which tries to expand its broadcast also on internet, proposing alternative channels such as tell me more or backstage.bbc.com and other channels also external to the television world which are based on the principle of the user generated involving the users to suggest their projects: http://www.dracos.co.uk/work/bbc-news-archive and finally Share IT the presentation of Creative Archive Licence Group  http://creativearchive.bbc.co.uk and a search engine http://open.bbc.co.uk/catalouge/infax

But the most awaited guest was Kevin Warwick  http://www.kevinwarwick.com . He is considered one of the greatest students of cybernetics and of artificial intelligence; in 1998 put in his arm a transplantation, a two penny coin size, which allows his nervous system to be connected to the net. During the European Futurist Conference Lucerne, Kevin Warwick said that in the future we will not have more passports or car’s keys, everyone will have a similar transplantation which if it is connected with the nervous system could substitute different human activities, and could also be always identified.

For example Kevin Warwick lives in a place adapted for his mechanism and therefore the doors will open with his only thought and so other functions and each time he will come in his home he will be welcomed by a personalized greeting: “good morning, Mr. Warwick”. Kevin Warwick gives examples of experiments which show that with a nerve impulse it is possible to decide the direction of a mouse and how the scientific research is more interesting to the human-machine relationships. Or for examples how transplantation for the control of the Parkinson’s disease or for the injured legs. After years of auto-research in this moment Warwick wants to expand his research, experimenting the exchange, the networking, the communication with installations connected to the brain. He gave to his wife a necklace which changes colours and intensity with her humour. Kevin Warwick is the living demonstration of how the transplantation of microchips is not only a characteristic of the fantasy genre but also part of the reality.

At the end of the conference there was present Bjorn Lomborg  considered by the Time Magazine one of the 100 more influent people in our century; in 2004 he created the Copenhagen Consensus with a biennial check, Lomborg makes people reflect on the problems of the world such as the global warming, the hunger, AIDS or malaria and how the market can invest in this sense. Lomborg asked to experts how to spend 50 Billion to improve the world and his research was published in his new book “How to Spend $50 Billion to make the world a better Place“.

Maybe to distribute condoms is not useful because nobody use them how the involvement of a participant coming from Africa explains, but the fact that the companies can think to include in their marketing plan a particular attention to the problems of the third world instead only in the virtual world could be a great breakthrough.