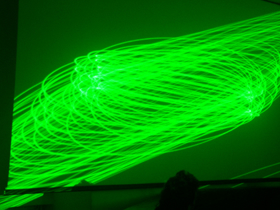 The last 17 th December there was the 6th Edition of the Italian contest of electronic experimental music and arts Ixem, at the Rialto Santambrogio in Rome, in an intimate and cordial environment; it was enough to dilute the competitive tension which was however present, to testimony the importance that the festival/competition of Antitesi has on a national level.

10 projects were presented during the event which starts from the 6 and finishes late at night with the proclamation of the winning project, Incastro di Mondi. Among the very few non audio-video participants together with Invisible fields in which Gianluca Beccuzzi aka Esa process at the pc stones and rubbles, Incastro di Mondi is a short performance in which three instrumentalists Mario Garuti, Grazia Mari and Luca Bossi (respectively at the violin, low clarinet and transverse flute) improvise controlled via game pad by Tommaso Perego.

an electro acoustic session with an high performance level and with a delightful visual impact: the four musicians are one in front of each other so that they form, with a cross of looks and intentions, the track of the directions and of the executive and performative choices, that starting from the interaction with the software (which is the 5 th element of the ensemble) enter in a rather tidy game of goads and answers with long pauses and convulsive moments vaguely rhythmic. The live of Federico Placidi and Matteo Milani instead is more organic, for double bass and laptop in the project U.S.O. Incastro di Mondi wins the opportunity of realizing a CD produced by Antitesi.

After the pause dedicated to the dinner, la long night of Live!Ixem rallies round the Dutch Thomas Ankersmit and Edwin Van der Heide, members of the jury together with Domenico Sciajno and guests who, for the occasion, exhibit in two brilliant performances. If the Italian audience it is said- suffers from xenomania ever since in the music such as in the politics, in the cinema, in TV and also in internet, it is in such cases that the thing maybe should be read as a symptom rather than as a disease.

The two Dutch give a lection of style not on a technical-artistic level but for the attention of the details, the scenic presence and the capacity of transforming the context into a real performative space. It is also true that in the northern Europe the electronic music is made very seriously, it is something for everybody and it is enjoyed, sold and used. So it has sense. It doesn’t frustrate the opportunity to not enjoy or to make a new delightful experience without entering for this reason in sterile dichotomies between lightness and gravity, seriousness and opening. But maybe this is another question; it is more complex and social.

The attention of Ankersmit for the scenic part of his electroacoustic performance is very attractive; his performance starts from a silent exploration of the synthesizer and little by little grows changing into a wall of metallic sound produced by the sax made with the pc. Ankersmit, elegant and serene, follows his improvisation with little movement of the body which are very emphatic but at the same time controlled and sure.

Van Der Heide (DigiMag talked about him in the issue DigiMag 06  Luglio/Agosto 05) works instead motionless, only with his laptop in the by now very popular LSP performance seen also at the Dissonanze in Rome and Mixed Media of Milan in the last year, immersing the spaces of Rialto into a perceptive very physical experience with luminous laser shafts flooded of smoke, which visualize the sounds generated and controlled via software with the space and on the walls in bio and three dimensional geometric forms.

He project Echran is interesting, it was presented for the first time at an international level at the festival Mixed Media of Milan the last June (DigiMag talked about it in the issue DigiMag 13- Maggio 2006) for the balance between the concrete elements and generative invasions and that of Pietro Riparbelli, built in growing on a single track starting from the elaboration of a analogical, iridescent and conjuring shaft of frequencies.