The strength of the imperceptible. Interview to Alberto Tadiello 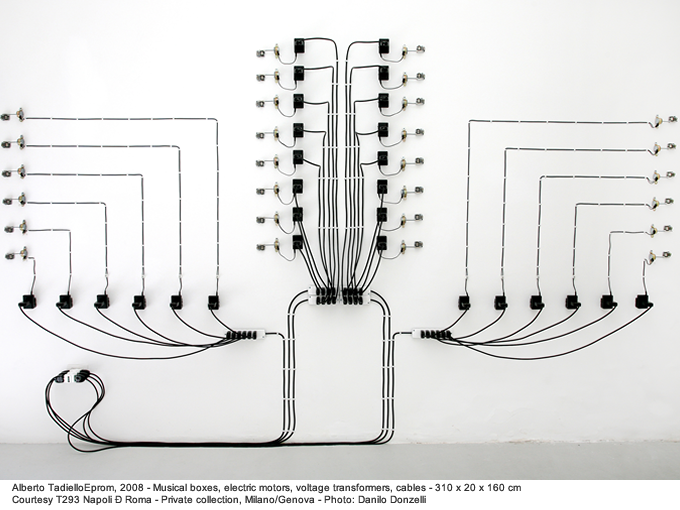 Alberto Tadiello (1983, Montecchio Maggiore, VI) is one of the few artists who have managed to break down the wall that separates the traditional contemporary art practice and that stream related to media art, which is close to scientific and technologic experimentation and the idea of “Do It Yourself”.

A recent essay by Claire Bishop (1) shows that there is reluctance by both editors and some artists to use new technologies, especially digital ones. Conversely, there is a tendency to recover and preserve media of the close past such as vinyl, films and video film, musicassettes (MCs).

Although not using any particularly new technology, Tadiello (http://www.t293.it/artists/alberto-tadiello/) concentrates on simple materials in an innovative way and often does this≠ through a formal solution, for which his work might act as a bridge between disciplines.

As he declared many times, the final configuration of his works derives exclusively from forms of life present in nature, to which nothing else is added . Everything is essentially assembled to help the functioning of a work that needs to result honest, clean, dry like a blade slicing the space. The same characteristic is found in the sound being produced by the mechanisms. 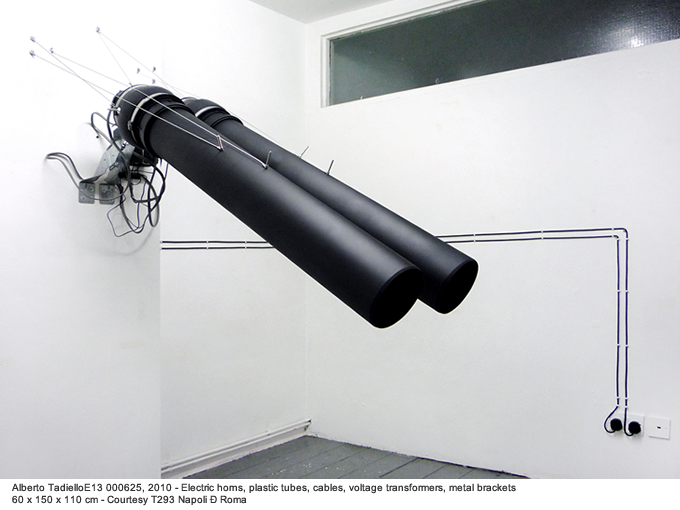 Tadiello has a background as a musician, but what he is searching for is not harmony in sound. He seeks unpredictable whistles, noises and vibrations emitted by its machines, . What he investigates, in fact, is the sculptural dimension of sound that has to fill the voids of the body. At the same time, filling those voids creates a forced reaction in those watching, one of his goals is to make hearing compulsory for the audience.

The most recent works by Alberto Tadiello are visible until Sunday February 24, 2013 at the Museum of Contemporary Art – Villa Croce in Genoa, during his personal exhibition High Gospel curated by Ilaria Bonacossa (http://www.museidigenova.it/spip.php?rubrique120&azione=eventdetail&eventoID=37445)

Alessandra Saviotti: At Palazzo Strozzi your work E13000625 (2010) was off. I remember well asking the guards to turn it on and then understood the reason it was not working. I was told that is was too frightening for the visitors and it was almost unbearable for the museum attendants. Had you predicted that the ‘ disturbing factor’ could compromise your work? Do you think this element can also be considered part of the work?

Alberto Tadiello: No. Absolutely! The fact that the museum attendants decided to turn my work off, did not become part of my idea of the work. Unfortunately, sometimes these things happens. E13000625 was not too violent or disruptive. It was a deep sound, cabled, guttural, adjusted around tens of seconds. The volume was moderate. I am well aware of the “disturbance” that a sound piece can create in a collective show or an exhibition space. I always try to consider the aspects  I need to confront every time, in order to respect those who work or live nearby. 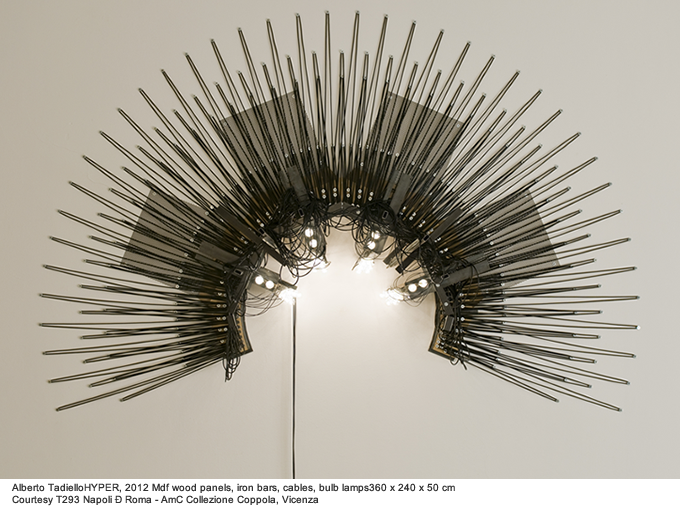 Alessandra Saviotti: How important is time in the fruition of your works? And how worn out are the works? I think of 9V (2007), EPROM (2008) and Switch (2008). But also of the drawings of Untitled (2006), where it is precisely the relationship with time to determine the ultimate form of the work.

Alberto Tadiello: It is a time that is not mine. It lives in its own cycle, and I am not immediately responsible for it. These works expose processes of disempowerment, sound, energy, physicality. All have to do with duration, with the sense of a measure and an effort. They are inexorably linked to a temporal dimension.

Alessandra Saviotti: In Come abitando in prossimità 2007), USB (2007) and Shift (2008), the center revolves around the search of the invisible and its manifestation through work. Where does your urgency to document the invisible come from?

Alberto Tadiello: I think it is closely linked to the idea of exposure, of detection. The imperceptibility has something to do with deafness and uncertainty and I am unable to pursue it to the end. 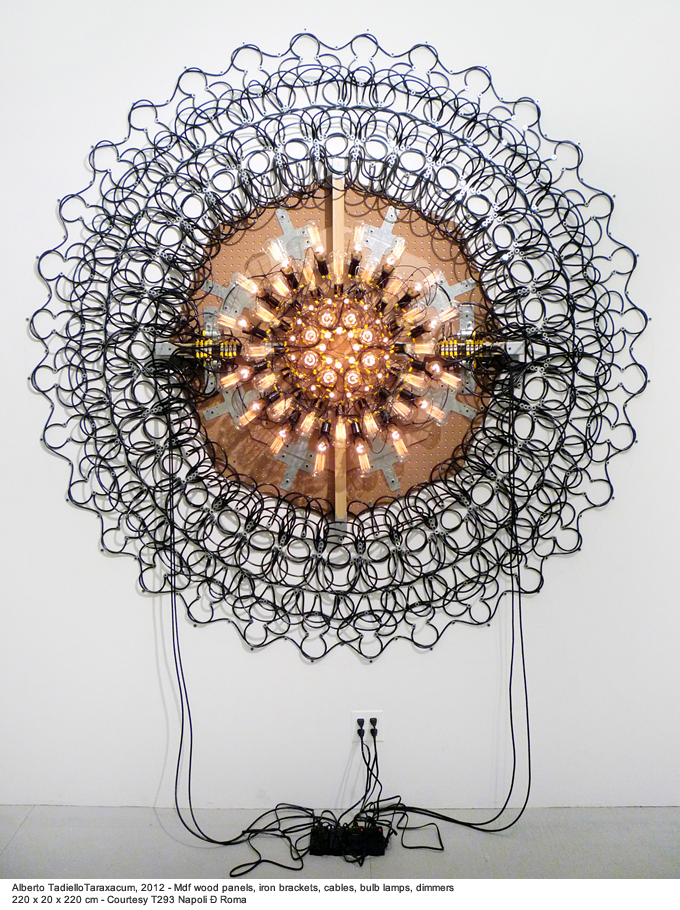 Alessandra Saviotti: All your works, especially the last (Hyper, 2012 – Taraxacum, 2012 – Elektronskal, 2011) are aesthetically accurate and well built. I would say, quite simply, ‘beautiful’. Yet have additional elements – sound, light, heat – which are crucial in your research. If you kept off your ‘machines’, do you think, they would have the same function in space?

Alberto Tadiello: I think it concerns different aspects of a single point of view. When I produce a work, it is very important for me that it is holding, in its being turned off, a potential or a residue of its being turned on.

Alessandra Saviotti: In your most recent works you added elements such as light and heat. How did you come to this evolution?

Alberto Tadiello: Every job comes from a visual logic, a stratification of yes and no, ends with a yes. I try to get the same consistency owned by Nature. 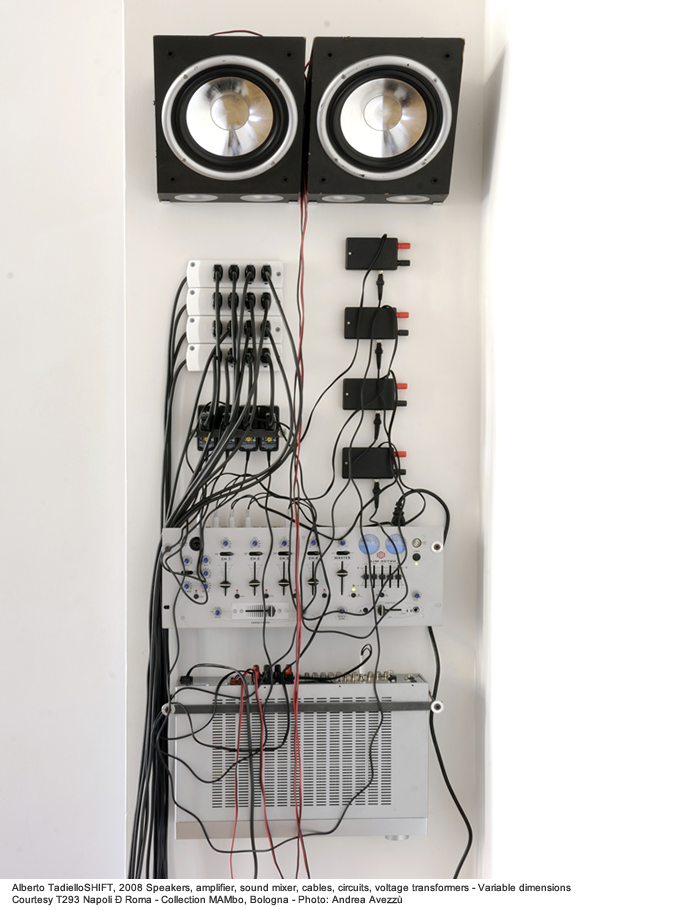 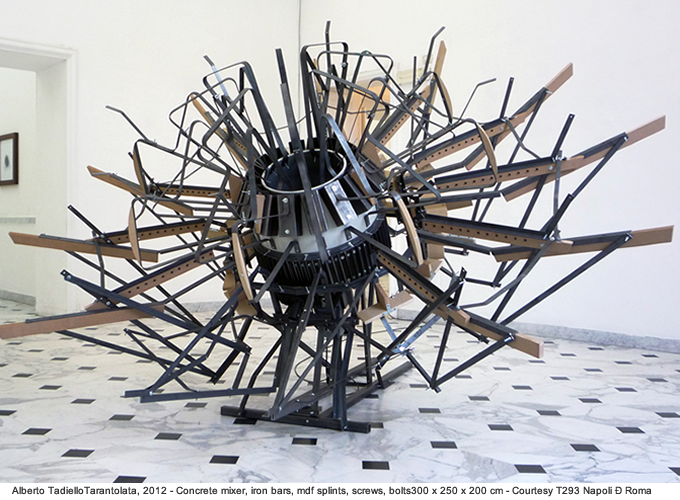 Alessandra Saviotti: Referring to your latest works, I noticed that the shape tends to become less ‘sharp’. The reference to nature becomes implicit. Does it disappear permanently or persist in the assemblying of the work?

Alberto Tadiello: No. I think that the reference to nature has become more explicit. If you look well, in the center of Elektronskal you can also see the pistils, scarlet. However, declaring it runs the risk to appear awfully childish, like trying to describe the seeds of a dandelion move with the wind.