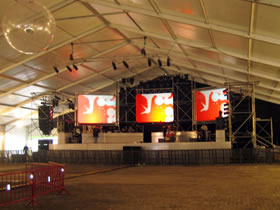 The Rec Festival of 25 th February 2006 in Madrid has seen the participation of different artists from all around Europe and local artists as well. The festival was a marathon of 12 hours where 24 deejays and as many vee-jay alternate head to head on two different stages giving a good overview about the last European production.

The RecMadrid, organized and produced by Nak e Tektun TV and completely financed by the city of Madrid, is the first festival the city has dedicated to the audio and video. The festival inserts in a larger European ambit where the crescent importance of the electronic art generates more and more shows that increase the value both of the image and the sound. I had the opportunity to meet the English group Addictive TV , the HFR-Lab from Rome, and the graphic crew Giraffen Toast .

I discussed on the actual state of the international audio-visual production, both in the live media ambit and in the newer Vjing. The groups told me about their experiences and their histories, the different attitudes and the approaches to the graphic, visual and sound management part of an audio-video product.

In this sense the work of the Addictive TV , presents with their AV live at Rec, has perfectly synthesized the potentialities of a live where audio and video are one necessary to another to involve the public and to the visual entertainment. The Addictive TV is a crew of Londoner producers and audio-video artists active from years in the Vjing international scene. They’re known not only for their performances, but also for their work for the TV, the production of DVD and the festival Optronica . International leaders in the audio-video production and in the vjing, their project called Mixmasters is transmitted every year on ITV1 channel . Thanks to the participation of world-famous artists Mixmasters represent nowadays the greatest collection of works from this gender, giving a global overview about Vjing.

Silvia Bianchi: How did European and international vjing change during these years?

Addictive Tv: During the last years the scene changed because of technologies changes, new software, and the diffusion of instruments to manipulate imagines as the DVJ The available instrumentation of today wasn’t available yesterday! We’re in a moment where groups of people, as the creators of Resolume , dedicate their time to create and ameliorate vjing products. All of this phenomenon brought vjing to a natural evolution and diffusion both of the vjing and media-live, accompanied by strong encouragements of the enterprises from this sector.

Silvia Bianchi: What’s your relationship with England and the local scene?

Addictive Tv: During the last years we’ve dedicated to the organization of projects linked to the promotion of audio-video production, in England as abroad, thanks to the collaboration of media and institutions. Since 2001 we’ve worked together with Cinefeel to the Audiovisual Lounge project. These shows, at the start played only in London and then proposed also in ShoreDitch and Paris, were a mix of DJ:VJ sets, AV live and installation with the objective to create a multi-media lounge.

The aim was to make people more aware at the point that those who came to the show were really interested in what was happening there. It was a beautiful experience, we earned a big success with the participation from all over England. Last year we organized the Optronica festival, an event born with the purpose to concentrate on the convergence of visual and electronic music. The festival, born in collaboration with the Film Theatre and the British Film Institute, we obtained the IMAX cinema of London as location, giving the possibility to artists as Dj Spooky and the Plaid to perform on the biggest screen of England during a three days completely dedicated to the audio-video live performances.

Silvia Bianchi: What’s your relationship with vjing and what’s with live-media?

Addictive Tv: We think they’re both interesting and important. The Club cannot guarantee to a VJ a total development of its abilities because this one is often forced to work with a DJ with whom there’s no compatibility. In this sense the Live Media gives a further possibility to the VJ, as he can dedicate to complete the performance. Recently we’re concentrating on Live Media, working together at the pre-production the audio and video cuts and we built a real show. During the live you can see the elaborated material under the shape of audio-video tracks where, for example, a jazz concert is proposed as a virtual jazz remix with a real orchestra who’s playing.

The experience of vjing increased our work to the point where we have to try other forms of audio-video contamination, as the Live Cinema for example. Recently on tour we’re presenting a project called The eye of the pilot where we add the guitarist Alejandro de Valera to our work. The project is a musical and video remix of the fabulous personal archive in 8mm of pilot Raymond Lamy, recorded during his flights in 50’s. This new phenomenon created a huge curiosity even between the movie festivals, who didn’t consider the vjing until now. But they’re starting demonstrating more and more interest and sensitivity.

The Hfr-lab is a couple of Roman guys who’ve been living in London from four years. They work as graphics and video-maker. The Heterogeneous Field of Research is a creative studio that involves the use of different media as generator of heterogeneous ideas, a lab where different types of research contaminate each others and grow up. In their work, characterized by an impeccable aesthetic, images melt with graphic that breaks down and compose landscapes.

Silvia Bianchi: Can you tell me something about your recent project?

HFR-lab: The project is called Cityscan , and include a series of production where video is just one of the output. The work born from an artistic process who gave life to several installation, live performances and an interactive DVD centred on the study of the urban space and its possible digital variations. Cityscan is an audio-video where images are a real visualization of the music. It travelled round many vjing and video festivals to end with the publication on DVD as complete product.

Silvia Bianchi: May I ask you how do you work live?

HFR-lab: We use 2 laptops, 2 USB controllers and a V4 video mixer. We work with final cut because we believe the quality of the images is fundamental. In fact the images we use are all shoot in High Definition format. The clip are edited in 4/4 so that we can follow the music even if used during the VJ-set and integrate the work carried out with the software in flash, so that the result is fluid and compact.

Silvia Bianchi: Is your work centred in general on the study of the landscape?

HFR-lab: Yes. At the moment we’re dedicating to another project, Bit-Scapes , commissioned by the Lovebytes festival of Sheffield, where we worked manipulating the images shot in a village on the west Australia . The installation develops on three screen where the images are elaborated in a different way with the aim to explore the concept of digital reproduction and manipulation. Each screen represent a different state of the metamorphosis modifying continuously the recorded image.

We wanted to give to the graphics and the animations organic behaviours, in a way that they followed the nature of the landscape, creating a sort of audio-visual composition. We wanted the elements to coexist in a new “digital biosphere”. That’s the reason why we added the work of a programmer who guaranteed that the digital reproduction would elaborate the image on the base of the parameters coming from the nature.

Another interesting reality in this Rec edition is represented by the GiraffenToast , a crew of graphics from Hamburg that during the last years produced video clips for artists such as Funk-storum , Matthew Herbert and City Centre Offices, with whom they appear in the Mixmasters compilation produced by Addictive TV.

Combining multimedia art and illustration, their vj-sets represent a superb example of how images can melt with animation.

Silvia Bianchi: May I ask you which is your approach to the Vjing and how do you work live?

Giraffen Toast: We started producing videos six years ago, attending an art school in Hamburg , where we graduated in video production. At the moment we work as graphics and 3D animators. In our live we unite our passion to the graphic world with the video, integrating Final Cut works with Flash clips. We like thematic works and preparing set where audio and video are related one to another. Often we take care of the audio part in our sets, adding with tracktor the audio track inside the visual.

Silvia Bianchi: May I ask you which is the festival scene in Germany ?

Giraffen Toast: During the last years the interest for the vjing scene increased a lot in Germany . We had the opportunity to present our work in many festivals both video and cinema ones. In general we can say that the interest increased for the audio-video production and all the visual-art production. There’s in some way a growing interest for the electronic art and all its consequences, as demonstrated by festival such as Bitfilm-festival of Hamburg , who dedicated in its last edition a special section to the vjing.