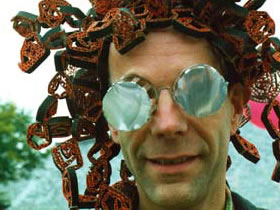 The official and awaited moments before meeting our mind myths are never the proper occasions for a fruitful exchange, as the conditions for a necessary concentration and participation do not occur easily. Neither does escape to this rule the meeting- on the16 th of March- at the Multimedia Library of Santa Teresa- with Geert Lovink, for the first time in Italy, guest in that setting as wonderful as it is cold, become an exemplary setting for research, communication and quality debate, beyond hosting daily a dense group of citizens and migrants using the multimedia library and Internet.

Lovink was welcomed by a crowded room, even though provided with a bad acoustics making the voice echoes, rather then having a rhythm of narration able to intermingle itself with daily life and partly to reveal, describe and enrich it of reflections brand new for deepness. And the deepness of Lovink’s thought is exactly his capacity to update and interpret emergent and radical phenomena, rendering them a critic prospective able to guide the intentions of “the man of the net” and to orientate his practises, rather than being a vanguard talker on phenomena of the Internet era.

The most intense part of this meeting concerned the subject of the blogs: Lovink read some parts of a recent survey, to be ended yet, Blog and nihilism. I think that in it you can find a reading key strongly oriented to the attitudes of the bloggers, from the point of view of “lifestyle”, of life behaviours, not in the meaning of lifestyle on the level of tendencies (those trends media abuse as if they were the primary and unique material able to build up a thought about the world- or to propose to the world), but rather on the level of a critical pragmatic reading of life needs, attitudes, balance of relations on which instruments of public digital communication continue to have an impact with and by which they are transformed.

Franco Berardi talked with Lovink investigating the concept of nihilism at a high level maybe generating an excessive detachment with the empathy of the spectator. Those masters are intellectual during their exposition as well as they are pragmatic when they do and when they explain and it is maybe on those aspects the exposition should focus on through a game with the listener leading people to wonder and reflect about the discussed subjects.

On the other hand, his survey was first of all practical and actual: the skill to combine his reflection on the net in an interdisciplinary context which found its most original forms in its approach to counterculture and its connection with social action. Those subjects are widely discussed in the text he wrote with Shneider- A Virtual world is possible– and, with the contribution of the portal Hermes_Net, are interpreted in a very lucid way. Lovink’s blog gathers the first draft of the new survey, reflections written by Bifo about nihilism and the different perspectives satisfying all the needs of reading and investigation.

Much more effective was the end of the night, with the projection of a recent work of cultural criticism, carried out through an animated video whose main feature was the quite total lack of figurative elements. A video entirely made up of lettering, that is to say textual forms gathering in a complex way, giving birth to forms, effects of composition, significant emotional and cerebral.

The subtle game is the continuous shift from the text in a figurative key, as pattern, objects articulating on the page, to the intrinsic dimension of the text-which is semantic- any other perception can’t do without. So, even if he alternates quickly multilingual to contexts of different meaning it remains a clear comprehension of the intention, aesthetic as well as of significance, implied in the work.

The text replaces images guiding the figurative value of the language, managing to express the same strength and skill in persuading. The text is strengthened by the explicit semantic key, directly introducing us to the meanings and to the sense of what we read. It is then our reading which becomes a double activity, on one side pushed up to the interpretation of forms, movements and transformations animation gives a further meaning to.

It’s then the reflection on language that is presented as a reading key and as a guide of innovation in the current scene of digital culture. Multimedia is just an abundance of languages to which it is necessary to put beside the research on the effectiveness of the languages themselves, passing inevitably from a critical approach to the instruments to an original proposal such as the work presented by Lovink. An invitation to a direct action, at least of the mind, passing through the words of the bloggers, the experiences of the activists, the behaviours of our daily being digital. A reflection on representation of what is around us, starting, in a strengthened way, from the expression of the elements of observation we provide ourselves with in order to understand it.

The media activist’s renaissance dates back to the beginning of the 90’s, together with the exponential growth of the media industry and the chance to have a personal equipment. In that period, we observe the creation of a new type of interest among activists, programmers, theorists and artists who recognise that the media are not only instruments for the fight, but a scene of new aesthetic and narrative experimentations too.

Those practices of technological liberation haven’t immediately become big social movements, but have represented the celebration of the freedom of the media. The growth of this situation (connected to the discontent organised in such a way as to converge topics such as neo-liberalism, the policies of the global warming, the exploitation in work, and many others) will allow, after the end of the post-modern “period without movements”, the beginning of a phase of great mobilization and the growth of an hybrid as well as heterogeneous tendency, labelled by traditional media as “anti-globalisation”.

And if in this case there is no answer and no alternative to the typical question each generation ask to them (what do we do?), it is not even allowed the possibility of resorting to solutions belonging to the past. “Multitudes” aren’t just a dream or a theoretical construction, but are a reality. If there is a strategy, it isn’t the one of contradiction, but of complementary existence. Here the mob and the cyberspace meet; their manifestations of protest take place in front of the international media and look for a direct confrontation. Rather then opposing to the current state of the things, they would like to add a new level of globalisation coming from the bottom.

The analysis of Lovink and Shneider continues with a look at the future of the movement appearing confused and resigned, without a valid ideological recognition. Even the moral condemnation of the capitalistic society is no more necessary as the events are very clear and the new social formations take possession of the streets and of media spaces without feeling the need to be represented by one or more authorities. People involved mobilize because of real worries and not for a romantic notion of socialism; you do not travel for hundreds of km in order to take part in a gathering of protest just to follow abstract ideas.

The two authors underline in fact how this new political perspicacity is the main step upwards of the recent period and how lately the values of opening and freedom are being affirmed. It’s exactly on these two values that the new concept of “digital multitude” is based on and they have been used on different fields such as the dialectic of the open source, open frontiers, free exchange of knowledge. This penetration of the concept doesn’t mean to come to a compromise with the ideals of neo-liberal class, progressive movements have always fought for the democratisation of access rules, of decision making and of sharing of acquired skills. “We aren’t just looking for a proper equality at a digital level.”

We are in the middle of a process constituting the totality of “a revolutionary individual” global as he is digital. We must develop a way of reading the “rough data” of the movements and of their fights and the way to render their Experimental knowledge comprehensible, in order to code and decode the algorithms of peculiarity, non conformity and non confusion, for inventing, regenerating and updating the stories and the images of a truly global connection, for opening the code source of all the knowledge in circulation and install a virtual world. The present time claims new forms of subjectivity (both in the environments of the web and in the real world) where those efforts are brought to a level of production where each one can consider himself as an expert, where the superfluous of human resources and the intensity of a daily experience could not get lost.

Although the movements against globalisation give the impression they have grown both on the streets and in the front line, the criticism on new media culture starts from a rather tough balance on the budget cuts and on a growing hostility and indifference characterizing the field at the moment. Even though someone declares that the power has passed from cyberspace and that incorporation between online networks and life outside the net has occurred, a question remains relevant: can we talk about a certain synergy between the protest of the street and the virtual “hacktivism” movement? According to the two authors we can’t.

Even though the two forms of protest are going through a common conceptual stadium, they risk remaining blocked at a level of abstract and symbolic debate no longer founded on real situation. You can’t ignore the contradiction opening between the real and virtual. Internet is a hybrid, a mixing of old and new and of manifold factors. “New” movements and media aren’t mature enough yet to answer back to the challenge of the existing power and the demands sound too weak and empty in this conservative atmosphere. What will come after the conceptual “demo version”? How is it possible to go beyond the prototype?

Instead of coining other concepts, the time has come to wonder about how software, interfaces and alternative standards could be actually installed within society. Current movements risk to be trapped into protest models of self-satisfaction. Instead of supporting the cause of reconciliation between real and virtual, Livink and Schneider refuse to conform to the “future is now” of cyberpunk.

And if it is now taken for granted that “information build us up” the consequences of this new awareness are less and less measurable and activists have just started to understand the impact of this paradigm. The growing tensions and polarization oblige us to reflect about the limits of this debate on new means of communication. The field of new media art, in spite of its constant growth, risks remaining isolated, unable to look at the problems concerning art and culture of the modern net-society. You feel the growing necessity to critically revalue art and culture of the modern net-society. Laurent Lessing remarks how innovation on Internet could be a danger.

After the collapse of the .com the net has lost its appeal: technology is no longer a novelty, the markets turned bearish and people don’t want to have anything more to do with it. This process, undergoing acceleration at the moment, undermines threateningly the future of the new media’s demands. Taken it for granted that capital and power remain in the hands of old baby boomers, the challenge of new media still must be rewarded. The discontent of media hasn’t been understood yet and the hope emerging from these pages is that the” buzz” of new means of communication could be transformed into something of more interesting before someone did it our turn.