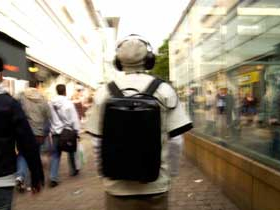 2007 marked the 12th year of Futuresonic, a festival that began as a sound art/ music festival and has morphed into a media art/ mobile communications-themed event with concerts, exhibitions, talks, and screenings staged all over the city of Manchester, England.

This year’s festival focused on topics ranging from “Free Media” to “Urban Playgrounds” to “Network Infrastructures” and featured a wide array of speakers, artists, musicians, and thinkers from around the globe converging on this urban landscape.

Futuresonic featured a new addition to its exhibition this year, called “Art For Shopping Centres,” which included three newly-commissioned art pieces staged inside the city’s “Arndale Shopping Centre,” a large indoor mall in the center of Manchester’s bustling inner city. British artist Graham Harwood’s “NetMonster” is a net-scraper application that searches and compiles data on the Internet for historical information related to the 1996 IRA bombing that devastated the city centre near the Arndale, injuring over 200 people. Meanwhile, Dave Valentine of MediaShed (in which Harwood is also involved) created “Methods of Movement: The Duellists” a videography of two “le parkour acrobats” running through the empty Arndale at night, in a continual “duel” that was filmed entirely though the shopping arena’s CCTV camera system. This project marked the first use of MediaShed’s “GEARBOX Free-Media Toolkit”, an open source software application co-developed with Eyebeam’s Production Lab, that allows for video editing on free platforms.

New York-based artist Katherine Moriwaki’s piece, “Everything Really is Connected After All,” consisted of a flock of mobile devices that, when brought within radio range of each other, produced emergent audio narratives about the shopping and downtown areas of the city (as told by Manchester locals). The intent of the piece was to focus on the shopping mall as a “non-place” or location that is both unique but still identical in any location around the world.

In the panel discussions and artist talks, lively debates ensued about the state of mobility in public spaces and how, through technological interjections into these spaces, new forms of dialogue can occur. The conference was organized by Drew Hemment who invited avid blogger Anne Galloway, with speakers this year ranging from sociologists to engineers, social scientists, and corporate researchers, all examining urban space with a critical viewpoint on topics from wireless networks to urban gaming to mobile systems that propagate across economic and social boundaries. The conference itself examined how technology use has become a “social practice” from open hardware and software platforms to collaborative applications that allow multiple users to engage in the creative process at once. This “Socialization” of technology was evident through the various speakers that presented on how distributed systems can enable new forms of urban interventions and collaborative interventions into the city space as an organic creature.

This year’s festival also held Manchester’s first Dorkbot event. Local artist Steve Symons spoke about his MUIO ( http://www.muio.org ) interface, a real-time, multi-platform, and open source hardware system (similar to the popular Arduino but without the need for any programming) that allows for sensing the external world and inputting data into applications like PureData, Max/MSP, SuperCollider, and Processing through a standard USB interface.

Although FutureSonic is in its 12th year, the festival is still struggling with defining itself amongst the now multifarious amounts of events focused on how “media arts” meet mobile technologies and platforms. This year’s line up of impressive speakers and interesting commissions added some interesting discussions into the mix. Through the next few years, it will be interesting to see how the festival grows and adapts to the current changes in media arts and how successfully it retains its focus on mobile technologies in order to steer away from the larger, all encompassing events that include every form and category of media art practice.