Balint Boligo’ And The Magical Machines 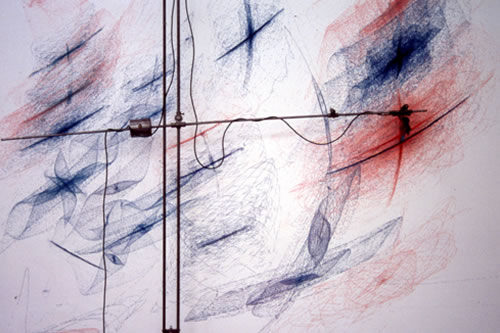 Bálint Bolygó, born in 1976, of Hungarian origin but a London resident, appears to be an artist who works with science. His family history confirms this: both his parents are scientists, and Boligò himself declares that this field was his initial means of inspiration for his own experiments and his own cultural growth. But when talking with Balint you realise that, despite maths, Physics and chemistry being significant reference points for the development of a personal poetical scheme, during the course of his artistic activity he does not want to create objects and sculptures that are scientifically significant, but instead wants to explore that thought-provoking space that brings art and science close together and has always made them unique and united.

Science, therefore, reveals itself in artistic activity, creating objects, sculptures, installations and visions that are rich with charm and mystery, where light, colour and shapes win over the spectators’ mistrustful nature, giving them the chance to delve into a magical and dream-like reality that investigates processing, the passage of time and the emergence of natural forces behind the hands and minds of man.

The first works, such as Pendulum (2001) or Lissajou Light Drawings (2001-2004), are machines/pendulums built to generate drawings and writing with a harmonious movement, A work like Ekka JP2000 (2001) on the other hand is a machine that conceptually develops a more complex process: a tire that has an engine and sprays paint in great concentric circles without continuity and following the laws of the most absurd randomness: a machine for unlikely road signs and a device for the urban evolution of action painting.

In Bálint Bolygó’s machines there are different scientific and artistic theories; the imaginary locations that he creates gain extra visual and emotional strength when in contact with the action of the spectator who can activate the pendulums, ropes and pulleys, thus partially determining the movement and product of the works that each time give back a new interpretation of shapes, colours and lights. More recently, Mappings (2005), creates a world of spheres and cartographies that are different every time, and Trace (2008) investigates the meaning of human representation generated by technology, reinterpreting it through a mechanical process

Silvia Scaravaggi: Let’s begin with one of your most recent works: Epicycloid [Laser Theremin] (2009). Are you working around live human interaction? Is it an important theme to you? Is it new in your path or have you always been interested in this aspect?

Bálint Boligó: Epicycloidoscope in a certain sense came about from a previous work I had done where I based my work on human interaction so that something visual can happen. That’s how I understood that the public doesn’t always interact with the new objects in the way that you expect, and it’s something that I’m really interested in. My works try to involve the spectator in some way, even when it means simply pushing a pendulum or giving life to events with movement sensors. I think that as humans we have an internal mechanism that is based on all the senses – including touch – when we’re in contact with a new object or sculpture. The exploration through human curiosity is the path that I am trying to set forth.

Silvia Scaravaggi: What are the main ideas that you develop in your work?

Bálint Boligó: The exploration of time with three-dimensional objects – or with time-based objects – is an element that is evident in all my work. The processes, and naturally, the time the processes require, are components that I try to show as part of the work or the object.

Silvia Scaravaggi: How much do you want to control the functioning of your machines and the result of each process?

Bálint Boligó: The process behind the construction and control of the machines that I create is really interesting. I have a specific action or objective in mind for every machine when I build it, so every machine usually has some variations or inaccuracies that show the limits of the system. My activity explores the nucleus of meanings that are between this urgency for “control” and the sufficient margin so that inaccuracy or a “happy accident” can be seen. It’s simply impossible to repeat certain phenomena, even if the result comes from a mechanical process. The exploration of this area between chaos and order is really fascinating.

Silvia Scaravaggi: How much does your activity have to do with awareness?

Bálint Boligó: I think there are different levels of awareness during the construction of my work. The initial phases of concept, innovation, engineering and fabrication of the machines are all connected to aware decisions and are scientifically methodical. Once the mechanism takes shape, a freer process is triggered in the interaction with the machines. The artistic visions of space composition, lines and colours all represent elements that are confronted unconsciously. The exploration of randomness and the possibility that some unpredictable phenomena may occur can often be the result of a mental passage that opposes preconceived notions.

Silvia Scaravaggi: Is there a conflict between knowledge and control, in experiencing your work?

Bálint Boligó: I think it’s more of a dialogue between the two things. Knowledge is something that people naturally associate with scientific art, and without a doubt my activity is evocative in this sense. Despite the fact that the aesthetics of my work can refer to this area, my works are not scientific apparatus, nor demonstrative models for laboratories. The function of my mechanisms is to control certain aspects of the creation of images, be they projections of incisions, of drawings or light drawings. This control is flexible, sometimes it is totally entrusted to the machine and the presence of the artist is hidden.

Silvia Scaravaggi: Can you describe the way in which you use time and light in your work?

Bálint Boligó: I got interested in using light and time since my project in Florence of prolonged photographic exposure (Florence Light Drawings, 2002). I used a laser beam and a handcrafted pendulum to create laser drawings on the sculptures in Florence. More recently I used these two elements in the objects and in the installations. Light, at any given time, is a temporary phenomenon: a change in light conditions can create a completely different experience in any given space. Many of my drawing machines generate drawings as a product of the passage of time during the process of development, so that my light works are a series of unique moments that often cannot be repeated and are really unique at any time. This makes working with light interesting, considering that it also has a greater resonance with the theme of memory and with the emotions associated with it.

Silvia Scaravaggi: How can technology change the way in which the spectator sees things, in reference to your work?

Bálint Boligó: Despite the fact that I use technology in my work, I don’t consider what I do to be technological. I try to stay informed through the Internet and newspapers, but I don’t want to use the most recent product to come out of research just for the sake of using it. In a certain sense, my work approaches technology from a vague prospective. I try to use the aesthetics of past technologies, usually associated with the 1900’s more than with current aesthetics. I think that today’s technology has miniaturised everything into little boxes that seem to be able to do anything you can possibly think of, and that this has left people completely isolated from technology. You can imagine that a computer can create anything without questioning where it came from. We cannot see the electrons moving around circuits and there are always fewer parts in movement in our gadgets. We don’t ask ourselves any questions, we simply accept this as reality. To see a simple pendulum drawing a mathematical diagram can be the work of a computer; in this sense past technology becomes significant in contrast to our computer era. I always try to reveal the technology that is behind my work, but it is an object that can be explored visually; works that reveal reality are at the base of the system.

Silvia Scaravaggi: Can art help us to understand the world we live in better?

Bálint Boligó: Anything that makes us realise that we are alive and what it means to live in our ecosystem can contribute to a greater understanding of the world. I believe that art – as well as other disciplines – does just that.