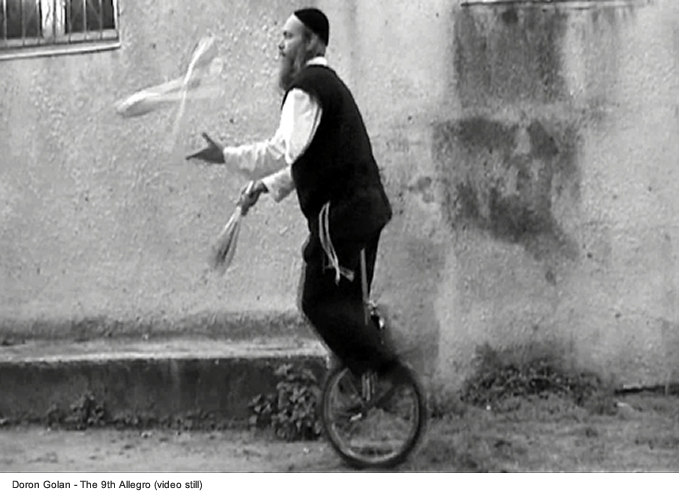 Doron Golan has been making short movies using the QuickTime format for over thirteen years. For most of this period he has been posting his work to the internet. He was a pioneer of net video and his work is profoundly marked by its digital facture and its presence on the net. I believe it to be a body of work of great significance – fearless, rich, human and often profound.

It varies widely in subject matter and technique from early experiments in abstraction or appropriation (including html page ‘installations’, where two or more of small videos are embedded in a single html page) to medium scale quasi narrative pieces, portraits, documentaries and landscapes. All these categories are provisional and permeable, for the various techniques and subjects shade into each other. (The landscapes often have people in them, in the midst of rituals; of mourning, prayer, singing, bathing, combing hair, feeding pigeons or looking at or making art). 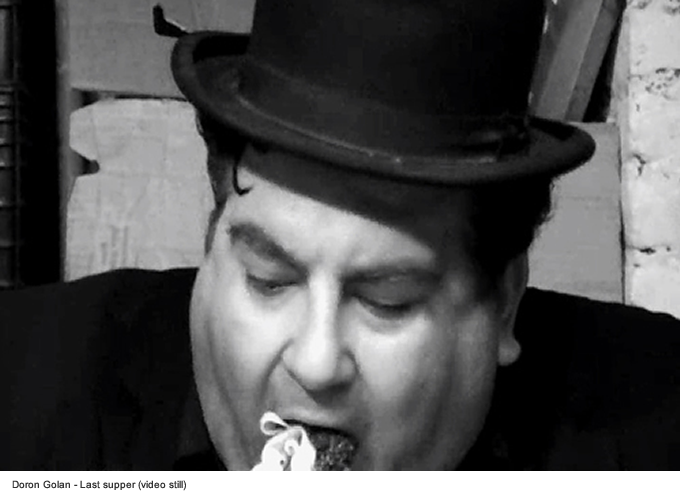 Different kinds of appropriation (and tribute) recur throughout, naturally as breath or heartbeat. Remix (The Perfect Human  the 6th Obstruction, an addendum to Von Trier’s set of variations upon the Jørgen Leth original), homage or ‘influence worn knowingly’ ( of Beckett, Warhol, Goya, of silent cinema) and, most curious, a sort of public set of notes to himself where Golan simply re-films work by Bill Viola

In the past few years he has been obsessively exploring the application of a limited range of effects to portraits (often with a mythical or biblical dimension) and landscapes. The most recent work focuses almost exclusively on the After Effects “echo” effect (similar to ghosting but more substantial, whereby each moving element on the screen triggers multiple repeats in time – a static background stays static).

A person walking or a car driving becomes a line of people, a line of cars. Without seeing it, it’s difficult to convey the sense of the various magical dislocations that this simple device is made to yield.

It might sound as if I am suggesting Golan is an outsider or naïf, absolutely not the case. All his work involves the careful deployment of a sophisticated technical and conceptual arsenal. What intrigues me, though, is what he allows to be finally made manifest to his viewer.) 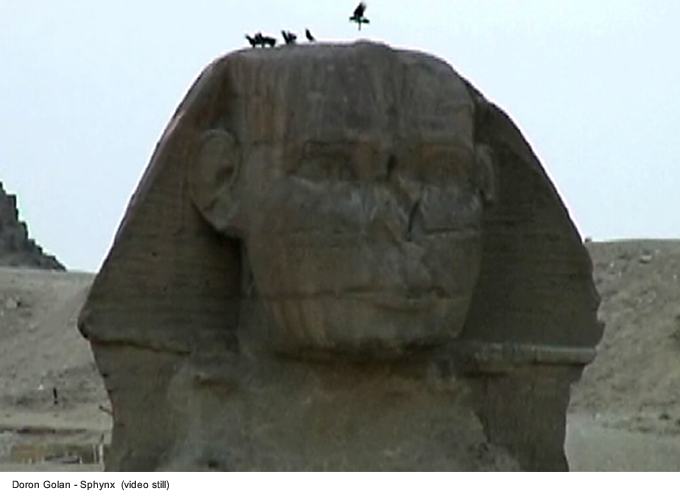 There are no explanations in the world of Doron Golan‘s films. No signposts, no clues. It’s as if the scene has been carefully wiped of traces. What is, is. In one sense the pieces are utterly transparent  they are mostly clear and simple – this is what happens, anyone can see it. But it’s the eschewal or effacement of any editorialising that makes them at the same time deeply mysterious.

To uncover the strange and wonderful, it’s often enough for Golan to look hard and carefully and point the camera. The pyramids or the Sphinx, a building underneath a torn tarpaulin and the peripheral everyday goings-on at the edges of these: lorries, guards, birds, a cemetery with mourners, the breeze, traffic. (And this combination of the monumental and the everyday evokes historical time in both its terror and its banality. Birds just like that fussed and squawked on the top of the Sphinx when it was new)

On the other hand, sometimes he ratchets up the oddness by the handling of his material – a tiny helicopter flies like an insect across a still image of the face of a man which has been rendered more frozen by the application of some painterly Photoshop filter; a shot of a hat on a wet floor suddenly appears in green tint in an otherwise entirely black and white film; the cutting obeys private and internal rhythms rather than any duty to fact or narrative…

We feel things to be symbolic; they look like symbols. The difficulty is we don’t know symbols of what. Often there’s a tiny (but resonant  oh, and I know it’s a cliché, but I can’t resist invoking the butterfly effect) touch on the tiller. Slow motion, reversal, single off-the-shelf visual effects (and if a student of mine used such a limited palette in the obsessive way Doron Golan does I would have a word, but Doron Golan wields it as a virtuoso surgeon does scalpel, needle and thread) are deployed to help us look hard and think harder. 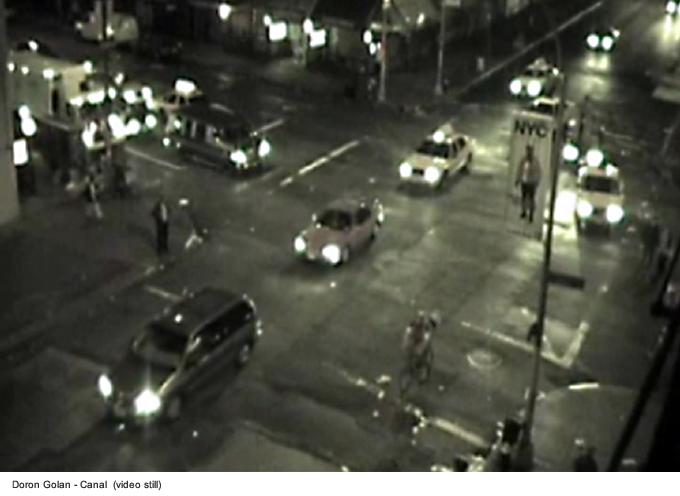 Pinpricksjoltsprods. So we look hard, think harder and hence feel – not routinely but freshly and awkwardly – as if awakening to a new world.

In Canal we see an intersection in New York and the traffic which flows through it. Actually, that’s not the first thing we see – that is a woman with blond hair shot portrait style but then rotated to fit the landscape format of the film. No explanation. She vanishes and we see traffic. The film is slowed down and reversed , but not slowed down evenly – it slowly grinds to a halt. At first I thought this was manipulation of the speed of the film but now I believe it to be the stop-start motion of the small segment used for the piece. What do you think? Look!

Half way through the action starts to run forwards and accelerates back to where we started. But we don’t see the woman because the file contains in turn the woman, two instances of the traffic footage, one backwards and one forwards and it is then looped within the html page. So the file plays once through and then effectively repeats itself, but the woman does not appear again until after the second “forward motion” cycle. Again, look!

There is something childlike about the intense and consuming engagement with a single subject, an obsessive attention where all is freighted with significance. And let me be quite clear  ‘childlike’ is praise. I mean: a state of disinterested but passionately hungry looking.

This sense characterizes, too, Golan’s editing. Almost random playfulness – of testing, if necessary, to a kind of destruction; again, the child. Things start, something interrupts, something resumes. The forward motion of time is denied. No illusion of continuity attaches to the body’s movement. Everyday logic is constantly refused

In After the Revolution, a portrait of the singer David Rovics, there is a false start, followed by some direction from Golan. “Aha!”we think, “no fourth wall, self-referentiality and knowingness!” but then the rest of the video turns out to be a straightforward and well mannered recording of a utopian political song. Which song, we now realize, as it politely unfolds, is much stranger still than what we were initially led to expect from the movie. The eye! 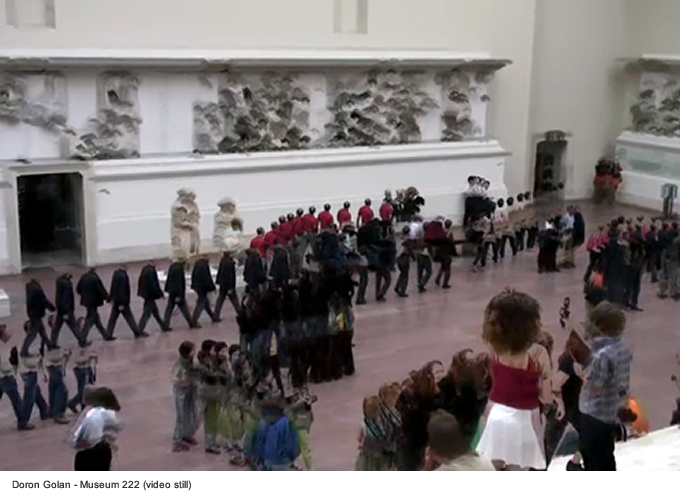 Some of the pieces are the simplest of portraits  face-on recordings of individuals. Golan’s awareness of recent art history (and I want to say: Doron Golan‘s awareness tout court, his curiosity, sensitivity to the worlds about him, to institutions, to cultural and other activities, to the marginal and dispossessed) is a constant presence in his work, so one can see the Warhol screen tests as clear antecedents.

Here, though, it’s as if any trace of the conceptual had been removed  the nod to art history is there but once we’re past that (and we’re past it quickly) we’re doing an unfashionable thing, with an outmoded concept – peering into a soul.

There’s an ecstatic quality to many of the portraits  in Sorin at AP Artists Proof the fixed camera mercilessly focuses on an individual for over four minutes. There’s a smack of cruelty to it  the subject, a middle aged man with learning difficulties, adopted into an Israeli artist’s colony (who is either wearing a strange hat that resembles a beekeeper’s or is surrounded by mosquito netting to top and left) looks away, smiles nervously, looks back.

He increasingly searches for reassurance and meets – we guess – only the camera’s bleak blank eye. (I wonder, was Golan behind that camera or did he leave it running with instructions to the subject and move away?). The ecstasy here is one of discomfort (of wanting, but waiting, to scratch a luxuriant itch) for the subject, but of discovery for us. I find this piece almost unbearably moving. 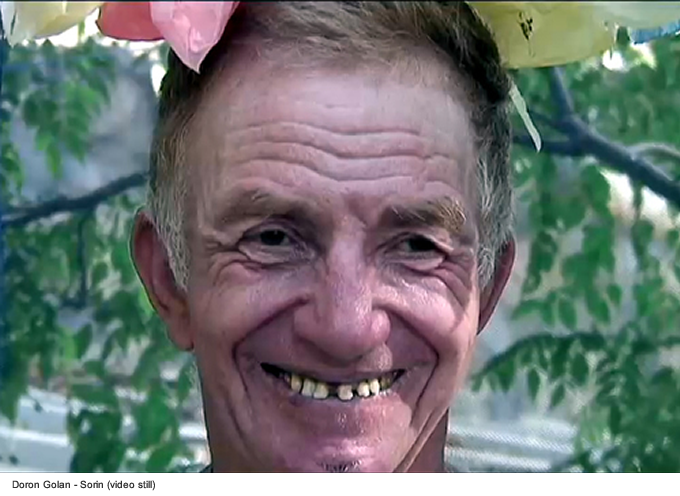 In Ganesha, Golan turns the camera on his brother Ofer, who sings a Hindu religious chant. Here the ecstasy is religious or at the least that of total mental and physical commitment to an important task. In its equivalent but different force it’s a most apt companion piece to Sorin. Other pieces are portraits in the sense that we watch an individual going about their – usually somewhat idiosyncratic – business .

There’s the juggling Rabbi of The 9th Allegro (It sounds comic, like a variety turn, and truthfully there is an element of this; Golan’s work is rarely solemn or po-faced. But there is dignity too and skill and joy – ecstatic communion with, and defiance of, gravity).There’s Boaz Eliash and his pet crow in Tale of Crow, or the miniature keyboard playing Haifa tramp, Joseph, in Hobo Joseph Haifa .

In many of the fictional pieces, too, the face is key – the lugubrious and mobile Theodore Bouloukos as he mimes and dances, shirtless, through Try Jah Love or eats a last meal in Last Supper under the watchful eye of a Stan Laurel figure half his size – his executioner, or jailer or his fool; the luminous sensuality of the face and hair of Joanne Gordon in 3 Majos: La Maja Desnuda. And whether it’s that Golan chooses to film those with rich and interesting faces etched out by life or whether his subtle art seeks out just those features in potential and ennobles them, or both, it’s difficult to tell.

There’s something of the parable in much of this work. The titles alone: Last Supper, One lot for the lot of man and of beast, Till Joseph flies to hide the biting tears, Uniqueness of a Prayer on Temple mount suggest this, but it’s the simplicity, heightenedness and the feeling of inevitability of how the pieces unfold, combined with their inexhaustibility – I come back and back to them – that confirms it. As with the question of ‘symbol’ so with ‘parable’ too – one feels one could grab an unequivocal meaning so easily but it hovers there, always just out of reach. (And although Golan never explicitly references Kafka it seems to me there is a deep kinship in precisely this quality.) 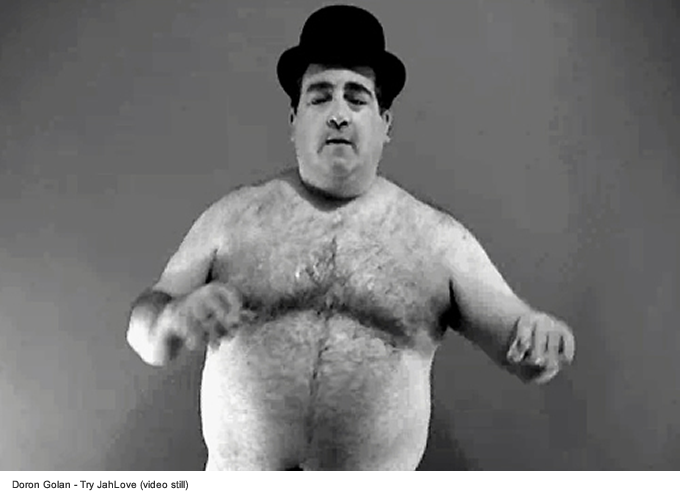 There’s a marked fellow feeling for other artists. For the work of being artist, interpreter, teller of stories, singer, dancer, shaman . Goya, Doron Golan‘s friend Meir Pichhadze, Bill Viola, Beckett, Nam June Paik. A huge generosity of spirit but an unequivocal expectation of reciprocity too – a tradition of work that may be referred to, built upon or shamelessly plundered and the spoils placed before us for our inspection.

There’s much more to be said. Next time I’ll look in some detail at a single recent work by Golan. I’m mindful that there are whole thematic and technical areas I’ve only touched upon  humour is one and an extremely individual approach to sound and music another. I’m running out of space. Until next month, go and take a look for yourself.