Schwebung. When Stephan Mathieu started his own label 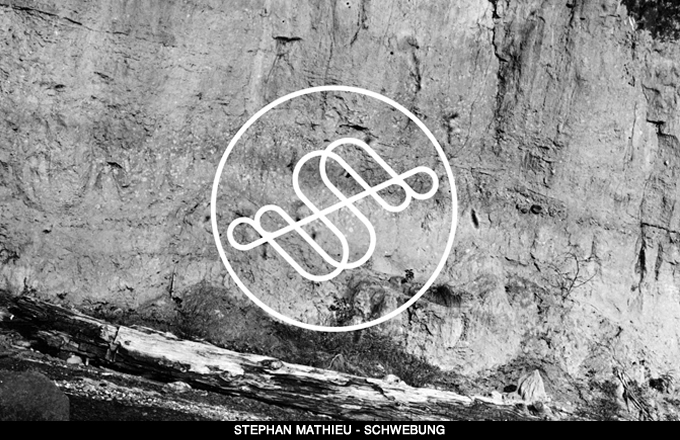 Schwebung is the latest project by German sound artist Stephan Mathieu who has been already interviewed by Pia Bolognesi for Digicult (http://www.digicult.it/it/digimag/issue-062/costellations-and-fragments-the-sound-by-stephan-mathieu/). Schwebung is Mathieu’s own label, dedicated to release solo and collaborative work on vinyl and as high-resolution files. As he said: “Although I’m feeling very previleged to work with some great labels from around the world since the mid 90s, I thought it was the right moment to do it myself”.

Schwebung is different from Mathieu’s previous works, it consists in a project between an independent label and a collaborative platform. The aim is to share and create individual or collective projects on vinyl. The first LP is going to be release next  21st of September, the title is Palimpsest and it was realized in collaboration with Sylvain Chauveau e Caro Mikale, who created the visual identity for Schwebungwhile running Cabina, a studio for communication design based in Buenos Aires. 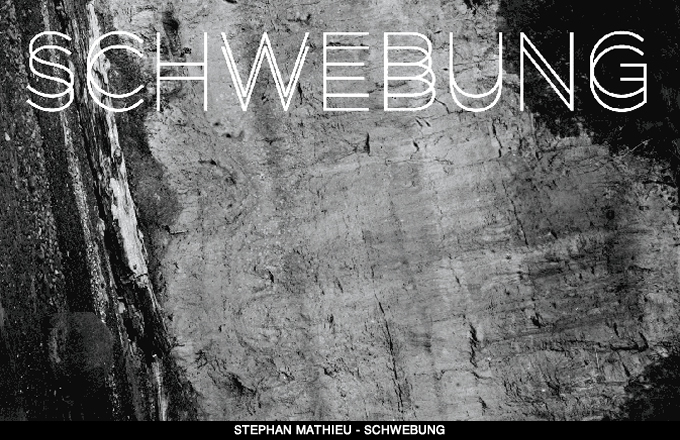 Alessandra Saviotti: Almost one year ago, you said that collaboration was a fundamental aspect in your practice. Today we can read on your website “I feel it’s a good moment for me to go ‘indie’, in the best sense of the word.” What happened since then?

Stephan Mathieu: While my recent music projects are indeed mainly collaborative works, by ‘indie’ I mean the classic DIY way of running a label – taking full control over the curating aspects as well as the design, production, distribution, promotion, basically running my own little company the way I think it can work. With 30+ proper releases out during the last 20 years I pretty much know what I want, – and even better what I don’t. Schwebung reflects this experience, especially in a time where the whole music business has changed. As absurde as it may sound, I have picked this moment to try to generate some income from actually selling music.

With my first release on a bigger label, a 12″ vinyl on Kitty Yo in ’97, it was already clear that you will hardly make any money from selling a record or CD with ‘this kind of music’. So if you are fortunate, you will end up playing live shows with invites based on good reviews, and probably selling some of your artist copies to the audience there. Apart from some exceptions where you will receive a modest advance for an album, you are relying on ‘selling’ your music over and over again, in live shows, which are certainly great to play but another lot of work at the same time – let alone the fact that an appropriately payed show is a rare thing –, or on Discogs. At the same time I’m working literally around the clock on music and invest most of my income in equipment, production and production related travels. Chances are you’ll end up being rather poor, unless you have a great run of payed shows, like it happened to me during the second half of 2011, or are invited to work on a soundtrack for a documentary film. Things are out of proportion, and it took me a very long time to see that for myself. In the very end, as much as I value the labels I’ve worked with so far, it feels like I can not afford to share the tiny profit a release can generate anymore. At least if we are talking about an album, that often takes me 2 or 3 years to create. This is my job and I finally want to run it as a business. Don’t get me wrong, with money I don’t mean capital M money, I’m talking about paying a rent and insurance. 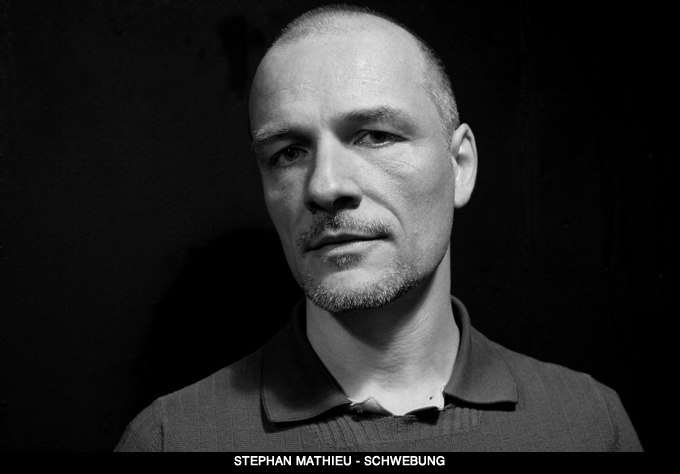 Alessandra Saviotti: Schwebung was launched the 21st of June during the 64th anniversary of vinyl’s fabrication. You are fascinated by old technology and you are using it in your production. Do you believe the vinyl could be still a reference point today, as physical supports are going to disappear especially in the music field?

Stephan Mathieu: June 21 was picked for launching Schwebung simply because the date seemed reasonable in order to have the concept and web design ready. Part of the label’s profile is to have four seasonal releases each year, something that is also reflected in the catalog numbers. So Schwebung #1 is Æquinoktium 2012, #2 Heliostásion 2012 and so on. While researching the history of vinyl, I noticed that this new material, the successor to shellac, was first presented on June 21, Solstitium 1948 and thought I’m doing something right here.

I strongly believe in vinyl as a perfect physical object to connect with the music, actually I always preferred vinyl above CDs, even when the CD was introduced back then. Early critics had bemoaned the fact that CD audio was compromised in a way that the frequency range not audible to the human ear was simply left out. In fact early CDs sounded exactly like that to my vinyl collectors ears, cold and flat. If you can’t hear it, it doesn’t mean it is not there. A lot of crucial information that characterizes the space and depth of a good recording sits exactly in this frequency range. Well, starting this discussion always means to open a big can of worms for a whole lot of reasons, be it just the playback equipment or listening environment of the listener at the end of the re-production chain. People have written entire books on this subject, so I won’t even go there. Also digital audio has certainly advanced a lot during the last 30 years. But then there are vinyl productions from 50 years ago which still are a benchmark in sound reproduction.

All those ifs and buts aside, I have always produced my own music with vinyl as the reference format in mind, my sound simply works best when it is reproduced analog. For Schwebung I’m using one of the best vinyl production chains available today. This production is quiet expensive, but I don’t see a point in producing cheap or mediocre vinyl only for the medium’s hipness factor’s sake. I want a record to sound as good as it gets.

Being aware of the fact that many people don’t play vinyl I also offer Flac versions, 1:1 copies of the 24BIT master files in this case, which are included as free download with each record and are also available as stand-alone downloads with dedicated PDF artwork. It’s the way I want to have my music available digitally and people are free to convert the lossless files to their needs from there on, be it MP3 for on the way, or AIF/WAV to burn on a CD for the living room. In case someone is as obsessed with audio the way I am, they can play the 24BIT version through a computer interface or other dedicated hardware. I will sell the digital versions at an affordable price, so in case you want to buy a copy you wouldn’t have to think twice. Since I don’t use iTunes or the likes, digital sales also mean straight support.

All that said, whenever a label should be interested in a CD reissue of a Schwebung release they should feel free to get in touch. I will not offer this format and I’m also quiet sure that the era of the CD will come to an end pretty soon. As long as the alternative is not an even more compromised version like MP3, that’s fine with me. There’s a great legacy of audio refinement to take care of, especially for music that is made to be listened to. As a musician I care about my equipment and instruments and pick them because they sounds great, so having the music available as MP3 pixel soup – even commercially – after all the steps involved to make every BIT shine is a saddening scenario. To me high quality vinyl is the best way to have my music available, and vinyl is here to stay for a substantially longer time than the CD. Since vinyl is also a beautiful object by default, my personal decision was an easy one : )

Crisis, in the end it is up to the artists and labels to come up with interesting concepts to save music from becoming a mere digital ghost, especially for people who still enjoy the physical object that a release can be. If it’s not CD anymore and vinyl is not an option for many listeners /collectors either, a T-shirt, cap or label mug is only one obvious choice of what a music-related object can be. Give me Eliane Radigue, the pillow sheet instead. 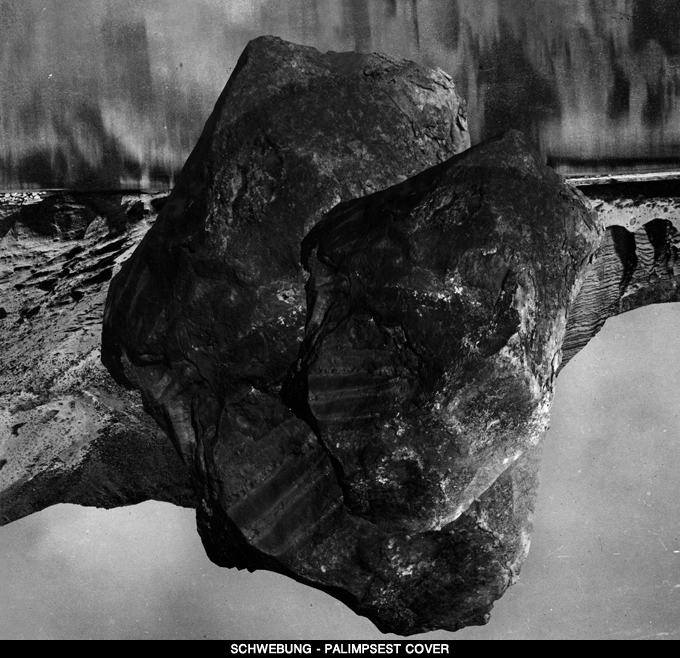 Alessandra Saviotti: The first LP released by Schwebung – Palimpsest – is the result of a collaboration with Sylvain Chauveau  for the vocal part and Caro Mikalef who designed the cover. Could you tell us something in advance before the launch which will be next September?

Stephan Mathieu: Caro has created the design for my last 10″ on Dekorder and also for the vinyl reissue of A Static Place and I love her visual approach to my music and the processes I’m using. While the first releases will follow a certain grid, our goal is to keep things open and not to end up being fenced by CI rules. In any case I’m very much looking forward to the things to come!

The seeds for Palimpsest, the album with Sylvain Chauveau in a way also go back to Caro, since it was her who introduced me to Sylvain’s music and said “The two of you should make something together.” Since I loved Sylvain’s music and had an upcoming show close to Brussels, I got in touch and invited him to come over. We had a great exchange over the following months, actually with an instrumental work in mind. At some point I had this suite of instrumentals which I sent to him to add whatever he feels is right. To my big surprise he soon came up with the idea to add lyrics by Bill Callahan, from early Smog era songs. Once I received Sylvains vocal recordings, I was completely stunned by his performance and the fact that he heard this potential in my rather abstract tracks and the way he placed the lyrics there. Since my initial track were used as is, the whole project has the spirit of an exquisite corpse. To say the least, it became a very special work for both of us and I’m very proud to have our album as the first release on Schwebung. 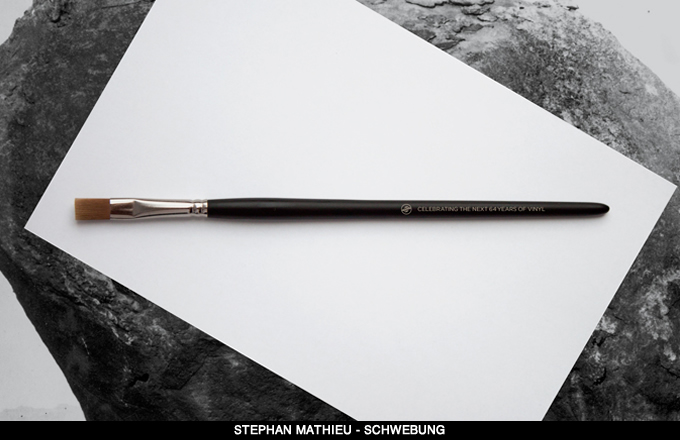 Alessandra Saviotti: Are you working on a new production for Schwebung?

Stephan Mathieu: Revenant, the second vinyl edition will mark the start of a series with pieces from my Virginals project (http://www.bitsteam.de/wp/?page_id=28), which is about performing new compositions with early instruments and obsolete media technology. Revenant is a composition by San Francisco based composer Tashi Wada, written for renaissance keyboards played with Ebows. Earlier this year Tashi and I have spent some days at the GRM Studios in Paris to record several variations of Revenant, the double LP will have a 120 minutes selection of this quiet stunning piece and I’m very much looking forward to this. The album will be available for pre-orders on September 21 and out in December.

While Schwebung #3 and 4 are not 100% decited yet, #5 will be another double LP, this time with interpretations of Carlo Gesualdo’s 5th book of madrigals. The first record of this set will have Gesualdo’s Libro Quinto performend by Noël Akchoté on acoustic guitar, the second LP has the same material as a ‘spectral’ version played by me on five Farfisa organs. All I can say for now is that Noel’s interpretations are of great beauty, very touching and special.