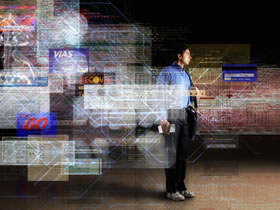 Marianne Weems is the founder of American techno-theatre ensemble The Builders Association, specialised in theatre exhibitions exploiting the richness of interactive digital technology and panoramic screens. In 2004, they brought to RomaEuropa the multi-awarded Alladeen , winner of an Obie Award, a not so much fairy-tale story about employees in a call centre in Bangalore .

Technology is always there, both concretely and as subject of the shows: the technological gap between civilised countries and the third world, the exploitation of workers by means of outsourcing, media simulation of events, technological mediation invading all actions in people’s life, electronic control. We witness a genuine example of politico-technological theatre, continuously played within exceptionally self-evident and visually effective theatrical scenography.

Supervision is their latest production; three stories describing privacy violation and real-time control and monitoring of free citizens: lives turning transparent, from their economic transactions and their physical movements, to their salary in the bank and their meetings in monitored public spaces. Marianne Weems puts up stories of ordinary data piracy in a post-private era, associated the underlying theme of personal identity turned into complex, uncontrollable information, separate from physical body and travelling through an invisible data-space within thousands of processors.

People living in the continuous remote connection of white noise, travellers held up at the border because of cross-controls between strictly personal information and the AIDC (Automatic Identification and Data Capture). Marianne Weems (who worked as playwright and assistant director for Elizabeth LeCompte and Richard Foreman) gave visibility and tangible concreteness to these databodies, to this immaterial infosphere, by means of an impressive structure made up of a panoramic screen, multiple real-time video projections, computer animations and a motion capture system.

A.Monteverdi: Which have been the fundamental steps in your work as a theatre ensemble: when were you born, what is your education and which are the artistic reference models for your multi-media shows?

M.Weems: We started 14 years ago by mounting a full-scale house, although “deconstructed”, inside a huge industrial space, taking inspiration from Gordon Matta-Clark. The house was filled with videos and sound triggers that the performer interpreting Ibsen’s play The Master Builder set off while moving through space. It was a utopian moment  the show, the house  and that is how our ensemble formed, during those eight months of joint work that involved architects, software designers, video makers, musicians, lighting and sound designers and, of course, actors.

I create and direct productions based on real everyday life stories  stories with an accessible, topical, pregnant content, reflecting modern human experience. In the last 14 years, with my company The Builders Association, I’ve put up shows on data theft, outsourcing, even jetlag. It sounds somehow a little sterile, but our productions are colossal, colourful, amusing at times. I told myself these stories should address a wide range of people external to experimental theatre: artists working with other media, the youngest members of the public and even the eldest. In an attempt to make theatre a mirror of our chaotic contemporary world, I work with actors and traditional theatre designers, but also with less traditional collaborators, such as video and sound designers, software designers, architects, and many more. Our productions went touring all over the world, from BAM to Bogotá, from Singapore to Melbourne , to Minneapolis , Los Angeles and Budapest .

These productions produced a passionate debate among the public on the real mutable essence of identity, work, life, speed and travelling. I want to expand theatre, I want to combine entertaining and critical thinking  and I want the public to investigate the invisible networks around us.

A.Monteverdi: How do you think it is possible to make technologies, even the newest ones, become part of an aesthetic horizon in theatre?

M.Weems: The Builders Association’s projects establish a fructuous relation between the liveliness of actors and that of technology, generating a sort of media network around the performers. In every show, the actors, together with the technicians, interpret and animate this very media network.

A.Monteverdi: Steve Dixon proposes a definition for digital performance “enhanced theatre”. Others talk of “post-dramatic theatre”. Which definition do you think suits you best?

M.Weems: We create original productions based on everyday life stories. The company exploits the richness of old and new technological tools to extend the boundaries of theatre.

A.Monteverdi: Can you describe the common creative process behind your productions?

M.Weems: Our projects develop in a highly inclusive way  all technology, designers, producers and actors are there from the very first rehearsal. This practice made us able to develop projects which really incorporate technology  content and form are interconnected on a deep dramaturgical level.

A.Monteverdi: I was touched by the themes of your works, the hard criticism on multinational companies holding economic power thanks to technologies, the exploitation of work, data piracy, monitoring, the distorted use of media in order to generate consent, and control society in general. But, which is the starting point and the real goal of your works?

M.Weems: Our projects are the stepping stone to political observation and discussion, wherever they are staged. For example, when we brought Alladeen to London , riots broke out since British Telecom had recently transferred thousands of workplaces to India. We came across similar demonstrations in Seattle (against Microsoft) and even in Bogota , while we were there presenting the show.

Supervision has a powerful scenography and the message is immediate: the negative use of technology against the individual, against his or her freedom: a distorted use, manipulated by the governments, but also by ourselves, since we would rather have technologically mediated relations than human contacts

A.Monteverdi: Do you think people are aware of this abuse, of this excess, of the worldwide digital divide?

M. Weems: All our projects make use of technology to tell stories about technology but also about the complication of identity  rich stories, true stories taken from contemporary events. Each project considers cultural productions and the effects of mediatisation; through this filter, we decided to report the most varied subjects, like travelling (in Jet Lag , developed with architects Diller + Scofidio), outsourcing (in Alladeen, developed with the South Asian company MOTIROTI) and, of course, data sphere in Supervision developed with the dbox group.

A.Monteverdi: What’s the contribution of the Net to your work?

M.Weems: R ecently, I’ve tried to reach outside the stage to arrive to whom has too little interest or resources to go to the theatre. There are websites linked to our productions, where thousands of people share thoughts and congratulations. My next show, Continuous City , asks the public to create material that will be included nightly in the show. In my opinion, this is a high-risk choice, since it produces a high-tech large-scale show, changing night after night and answering to different locations, modalities of participation and audience concerns.

I also started working with high-risk students in Brooklyn . We work on a long term production called Invisible Cities . I feel that all my performance modalities are based on broader perspectives, both when dealing with Brooklyn secondary schools and call centres in South Asia or global cities networks. I created theatre pieces for me and my strictest co-workers in order to embrace and evoke a much wider world.

A.Monteverdi: Most multimedia theatre projects need a rather long time to develop, both to carry out technical proof tests and because of high costs  therefore, the long time depends on the search for sponsors or co-productions; sometimes, the show is presented using a “work in progress” concept, going through different in-between steps; sometimes, during the setting up of a show, the single elements (video, sound) achieve full autonomy and become concerts, installations, video-creations. Do you use this intermediate “work in progress” modality too?

M.Weems: We need lot of time to raise funds and literally to build these performances  there are many people involved and many development stages. Of course, if funds were there immediately, it would be easier to proceed quicklyI must add that each show keeps touring for at least two ears after the premiere, and this balances the long time dedicated to creation.

A.Monteverdi: Do you think the public has the right tools to understand correctly this type of theatre?

M.Weems: In Europe, yes. In the US , this ability to understand is growing day by day.

A.Monteverdi: Who do you know among the Italian artists who use technology on stage?

M.Weems: Romeo Castellucci is my hero

A.Monteverdi: Are you planning a tour in Italy ?

M.Weems: We would like to go back to RomaEuropa: we presented Alladeen there in 2004 and we had a very good time.