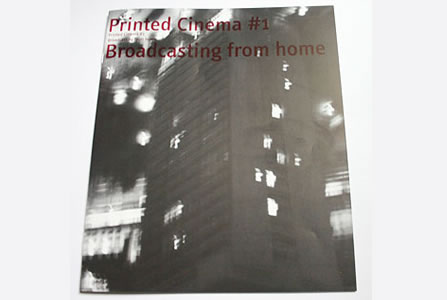 SCHAUFENSTER AT MUSEUM AM OSWALL - DORTMUND
9-23 APRIL 2006
In 2005 the Cologne-based artist Rosa Barba (*1972) received the Grant of the State of NRW for a Media Artist working in NRW which is organised by the Hartware MedienKunstVerein. In her works, Rosa Barba deals with the intersections between music video, experimental film and installation. Rosa Barba will present “Printed Cinema”, a series of print publications, as well as the installation “It’s gonna happen” (2005).

Rosa Barba studied in Erlangen and at the Kunsthochschule fuer Medien, Cologne. Her video works and film installations have been screened and exhibited in numerous museums and festivals world-wide, among them the Kunsthalle Duesseldorf, the Museum of Fine Arts in Taipeh, the Kunsthalle Budapest, the Museum Ludwig and the Kunsthalle Cologne. In 2006 Rosa Barba received the HAP Grieshaber Prize of VG Bildkunst