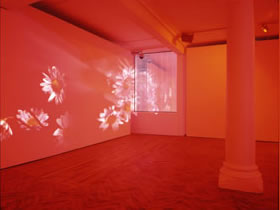 These days’ visitors of Siena meet with a maybe unexpected scenario when treading in medieval tradition footsteps they get to via di Città. A strident voice arrogantly tunes up a double-speeded song from the entrance-hall of the historical Palazzo delle Papesse  built in the second half of the Fifteenth Century and today well known as a Contemporary Art Centre; the visitors’ look instantly pass from the stone of the palace to the sculpture made up of monitors that originates the voice.

The ripped wrinkled video whose colours are pop culture-inspired shows a ruffled and sometime hysteric female singer that tunes up her almost incomprehensible song from the huge palace entrance-hall in one of the most crowded downtown roads. This makes the visitor unconsciously slip in the first lively perceptive short circuit of his trip. Through constant audiovisual raids in its last years exhibitions  mainly with Invisible , a 2004 installation, Popesses’ centre has dedicated a huge space to works of art whose interactive capability, digital culture aesthetic mark and impressive environment character attracted the audience’s attention on the most current video art trends audiovisual language technologies.

Popesses’ Palace seems to appreciate the attractive potentialities of experimental authors such as Olafur Eliasson . Until 8 January 2006 the Centre presents Look At Me. Video Perception a dynamic journey through an artistic production centred in the multifarious expressive capabilities of video language: it presents an historical reconnaissance of cornerstone video art works by such artists as Nam June Paik, Bill Viola, Gary Hill, Pipilotti Rist and then it puts these works in touch with works belonging to a younger generation of artists. This brings up-to-date the interpretation of old works and rekindles the war of words among perceptive codes.

The mobile and inquisitive Tony Oursler ‘s look in the Creation/Destruction installation asks us about our perceptive willingness to motion art. During our journey we also run into typical wall or screen projections like the beautiful video by Sefir Memisoglu (Untitled) and the alienating video by Julie di Mika Rottenberg . We also find one of the first examples of Studio Azzurro Sensing ambient (Tables, why are these hands touching me?) . Here the communication code between installation and visitor is not very clear and the potential expression of this work of art feels the effects of it.

There are some other works which are influenced by other figurative languages such as panting, drawing and animation techniques . Marzia Migliora and Elisa Sighicelli with Pitfall made up a run in an animated wood, a sort of video tableau vivant . The Greeting installation by Bill Viola represents a very fascinating encounter between video and composition stylistic features of the painting of the Sixteenth Century. References and assonances among the works of art are really constant. The Niamh O’ Malley ‘s idea for the bookshop space clearly refers to painting: the projection of swallows flying beyond a cloudy window painted on the wall multiplies the points of views and alters visitor’s perception.

As a matter of fact Look At Me is an interesting narrative journey not only for the works it presents but also for the capability of the Centre to come entirely into play interpreting with great versatility its spaces mainly its most charming spaces such as the “caveau” (Jessica Bronson) , the mysterious dug in tuff “caves” (Bianco-Valente), the roof-terrace (with an art program), the bookshop, the entrance-hall and transitional spaces.

Finally some works create their own special places: The table of Mona Hatoum enchants us with the overturning of significance levels  Deep Throat is provoking and disgusting. In You cannot shed heart at will by Giovanni Ozzola , Playhouse by Janet Cardiff & George Bures Miller and Latitude by Cotterrell the video is only one of the elements that make the visitor feel completely plunged.

It is clear art fruition is an experience in which the sensation of full aesthetic enjoyment derives from the alchemy of different components: the personal and social character, environment conditions and experience of the visitor. Fascinated from a work of art the visitor gathers these aspects in a sole state making the work of art memorable and clear like an insight that doesn’t need further interpretations.