Deep in the Forking Tanks

Deep in the Forking Tanks, the new video that provides the title for this exhibition, has artist Heecheon Kim meeting with divers and venturing down deep into the water. Before entering the water, he goes into a flotation tank to experience a simulated dive. Also known as a “sensory deprivation tank,” it literally enables to cut off sense of sight, hearing, and smell.

Inside one of these tanks, a person loses the sensations of their body and is capable of focusing fully on their mind. But as the training goes on, one starts to become confused at whether they are in a simulation or actually diving. While they are being drawn into a state in which their consciousness of physical reality is unclear, another sensory stimuation from the tank itself gains momentum. The “tank” here constitutes a frame that can blur the boundaries between the real and unreal perceptions, and at the same time accentuate those boundaries.

Heecheon Kim is curious about the process through which human cognition changes as a result of the invention of new devices and tools. Kim develops concrete hypotheses to surmise them in various ways. As he constructs his narratives in the video medium, Heecheon Kim applies his hypetheses and submits them to a testing process. 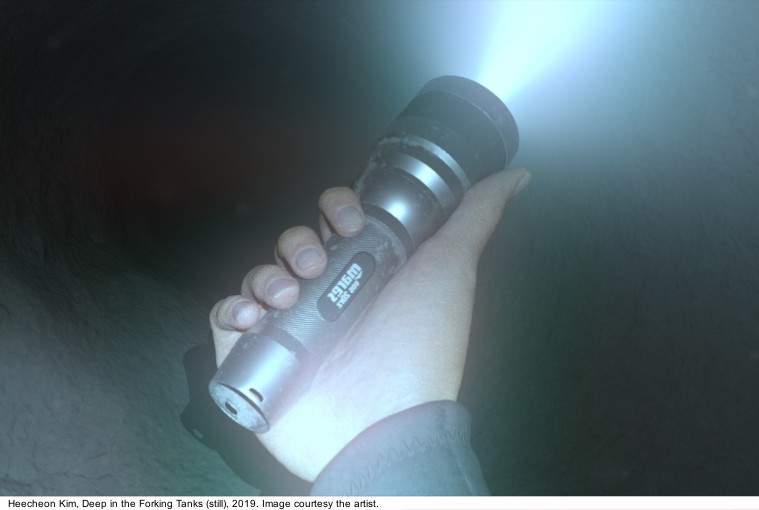 First, he records an actual situation with documentary-like footage. This record is used as the “actual” material to support his hypothesis. The artist actively applies digital technology to his footage—GPS, VR, face swapping, games, and so forth. In his artistic practice, these digital applications are one of his primary visual rhetorics and serve as media to stimulate different perceptions of reality.

Through these methods, Kim presents us with an unusual situation in which no distinctions are drawn between the virtual perceptions and reality that human beings are conscious of – where the boundaries between them disappear and reappear. Observing how developments in technology have resulted in technology becoming an invisible presence, he recognizes that this phenomenon is taking place at a far faster rate than human beings are able to calculate.

He uses ostensibly “futuristic” digital technology and images to produce his artwork, but the “future” narrative he presents is a departure from our ordinary expectations when we imagine the future. For human beings, cognition and consciousness can be as realistic as physical states. We sometimes experience how a perception can become immense that it blurs our awaraness of the reality that surrounds us. 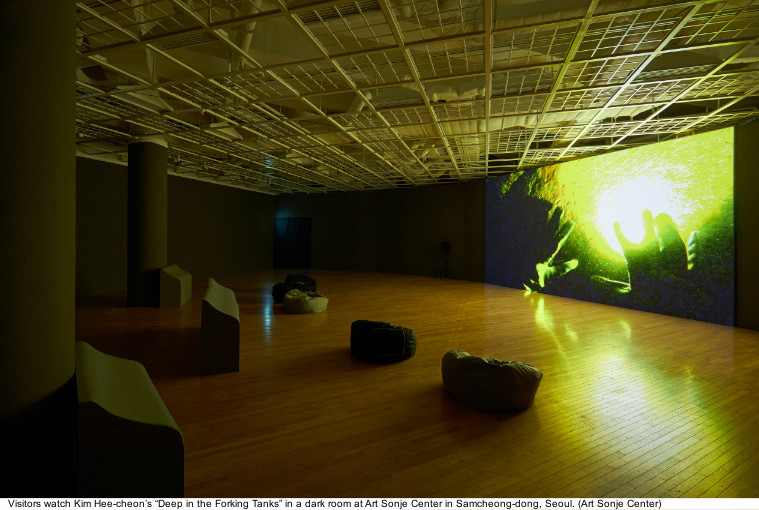 There are moments when theories and concepts of reality lose all meaning, when all that matters is the state we are perceiving. Historical time does not apply to the temporality of such moments, which can proceed toward any point at any speed. Heecheon Kim’s narratives unfold according to this temporality.

Some people may perceive the temporality within Heecheon Kim’s nimbly unfolding narratives as akin to a new experience – but it is actually similar to enter an incisive realistic device, like a lens offering an omniscient perspective on the human being inside of the “tank” as another temporal world without realizing it. As something all of us living in these times have arrived at ourselves, this odd temporality is utterly realistic.

Heecheon Kim (b. 1989) graduated from the architecture department of the Korea National University of Arts. He has held solo exhibitions at the Asian Art Museum (2018, San Francisco) and Doosan Art Center (2017, Seoul) and taken part in numerous group exhibitions at the National Museum of Modern and Contemporary Art, Korea (2019, Seoul), İstanbul Museum of Modern Art (2017, İstanbul), ZKM (2019, Karlsruhe), and the Museum of Contemporary Art and Design (2019, Manila).