Cao Fei: Demolishing The Virtual. Rmb City And The Crisis Of Art-reality 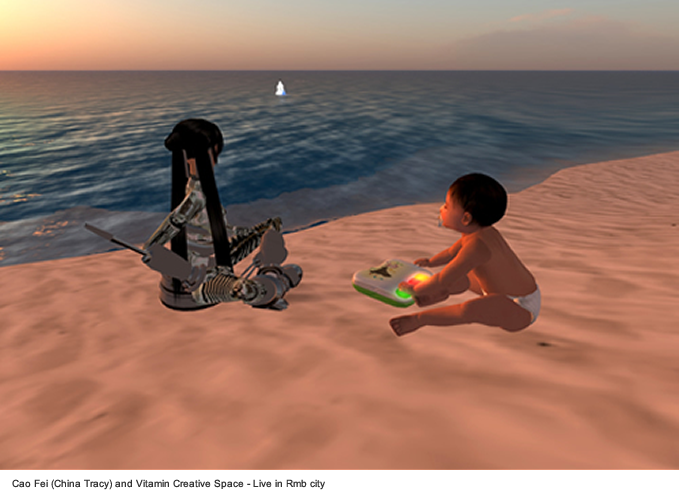 Chinese artist Cao Fei formally launched her last major project, RMB City, almost two years ago in January 2009. Nearing the end of its predetermined lifespan, the Second Life platform should come to an end within the next several months.

At this juncture I have been attempting to take the pulse of the virtual community as a whole, speaking with current and former collaborators on RMB City, collectors, writers, and other interested observers in order to figure out how to measure the success or failure of the digital metropolis. See below for a summary of the findings so far; next month in this space we will continue this survey with a debriefing on Chinese art in Second Life.

Cao Fei first began bringing the art world into Second Life by documenting her own ongoing explorations of the platform with iMirror, included in the Venice Biennale in 2007. Marking the beginning of an ongoing engagement with Second Life, that video introduced the avatar China Tracey as an alternative identity for the artist: sexy, female, dark hair in the style of Saior Moon. This figure has continued to appear within “RMB City,” which was first presented in video form.

There then followed the construction of “RMB City” as a platform, a virtual topography packed full of visually recognizable Chinese icons and architectural landmarks: an Erguotou liquor bottle, a hanging CCTV Tower, a rusting Bird’s Nest, a panda, and the Oriental Pearl Tower. One local art writer has described the graphic style of this digital assemblage as that of “the young hairdresser apprentices in Chinese cities who try to cram every hairstyle they know onto their own heads by way of advertisement.” That is to say, perhaps a bit messy, but also harboring the possibility of a productive clash between shape and connotation. 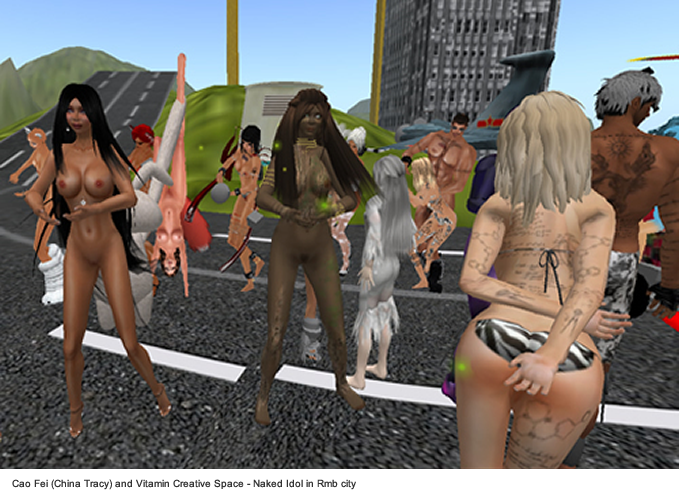 After RMB City was built, its major purpose has been to enact collaborations with external figures and the project team managing the virtual community under the direction of Cao Fei. In Love Letter, for example, visitors could pay for Chinese novelist Mian Mian, author of Panda Sex, to pen a personal love letter. NOLAB in RMB City marked a partnership with Hong Kong architectural studio MAP Office, exploring the structural possibilities of the rebuilding of post-Katrina New Orleans by offering a virtual space of potential energies.

This, it seems, is the ultimate power of RMB City and indeed Second Life in general: to provide the possibility of another world, and to pose hypothetical questions about transformations within a virtualized world.

Known as RMB City in English, the name in Chinese, Renmin Chengzhai, would actually be more properly translated as the “Walled City of the People.” Taken in tandem, as some has reflected, these conventions of naming and translation demonstrate in parallel the two universal cliches of art presented to a virtual public: an overdetermination of participatory effect (“the people”) and the symbolic exchange between the virtual and reality (“RMB”).

This city is then an intersection of these two directions, the path of symbolic exchange consolidated by the possible exchange between Linden dollars and U.S. dollars. In addition, the project calls implicitly for a certain degree of social criticism, as the urban landmarks open for free access in Second Life, remain untouchable in reality for most common people. In the same way, land purchase in Second Life corresponds with a measure or irony to the status of property rights in China (leading, no doubt, to a disastrous set of jokes about real estate speculation “in the cloud”).

The act of seeking a weak escape into alternative possibilities in virtual reality, or simply doing whatever is banned or impossible in reality, seems to look back to the now humorous follies of early film: one curator points out a particular resemblance to the 1933 film Mickey’s Gala Premier, in which Greta Garbo and Mickey Mouse shared the same stage. 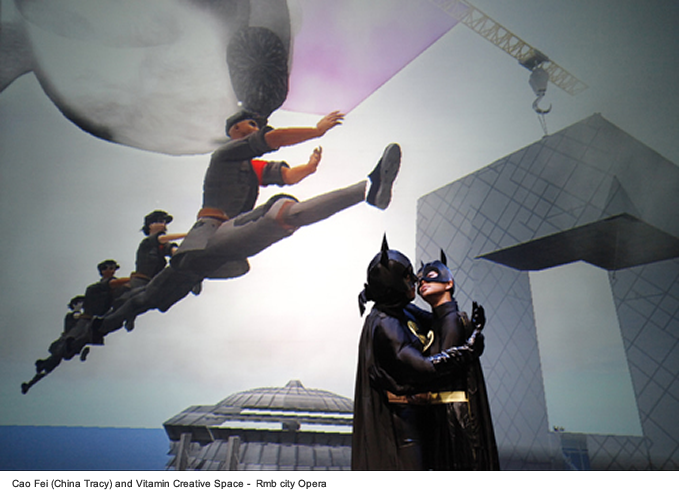 The critique most often heard with relation to RMB City is that it does not attempt to excavate the unique properties of Second Life. The virtual world does, to some degree, have its own culture, characterized by kink dungeons, real estate kiosks, and brilliantly crafted virtual objects, but many of these elements would be considered failures by the original designers of the platform, who hoped for genuine interpersonal exchange. Refusing to engage with the failures, RMB City instead assumes that Second Life is an ideal platform–a space without place–lacking any preexisting cultural milieu.

As a result, when Cao Fei attempts to inject her own art world cultural into the city, the digital arrangement of spaces and volumes feels hollow. Unlike narrative video games, death in Second Life is purely voluntary: instead of two deaths, the symbolic and the real or ultimate, death in Second Life can only be real–or, more properly, virtual. The refusal to engage with such determining factors means that the space of “RMB City” can be transferred into any particular video game engine, a floating island of virtual spectacle devoid of cultural meaning.

The project has been exhibited a number of significant events on the art world calendar, from Basel, Frieze, and Artissima to the Sao Paulo Biennial and the “New Yorker”. And like the works of other star artists, RMB City has been prone to doubt and criticism. Interestingly, however, negative comments from members of the non-digital art world usually stem from the obsolescence of Second Life (at least as a topic of academic and creative interest). I have heard, time and time again in China and internationally, that there is not enough “newness” to qualify this space as new media art.

Of course, within the conversations of new media we have long ago bracketed the notion that reliance on cutting-edge technology is the only criteria for inclusion, preferring the view that what makes media art good lies instead in how it redeems its own technological or mediated body through a new experience of perception, either in terms of its own reception or in terms of the vision of the audience. 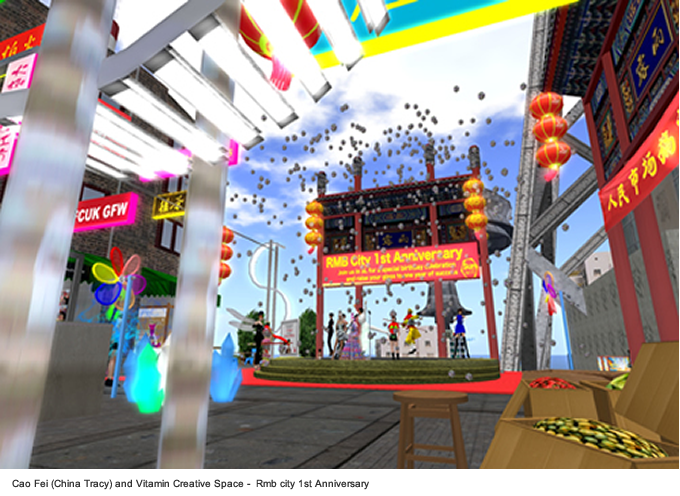 Ultimately, however, RMB City is a realm of spectacle intended primarily for visual consumption. Like its Yak Horn project in specific, which proposed a Guggenheim for the virtual city, the platform as a whole does not create a void, defined as an emancipated negative presence waiting to be filled by the discourses of imagination, but rather produces limitations of the same imagination. These restrictions are able to give rise to such a void, but here the form takes a colorful visual representation–a vertigo that serves only to blind itself.

That projects like this one have desisted in pushing at the boundaries between the virtual and the real perhaps has something to do with the emergence of a technological actual: where is the culture of RMB City to complement the cultures of Second Life? Was RMB City ever virtual? Or has it always been a phenomenon of first life?