The Other Tv Is Made Up With A Modem 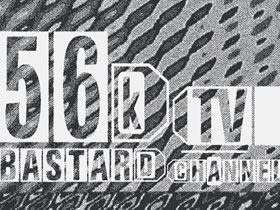 Think of intermittent images black and white writings and old televisions interferences. Think of biting shocking funny provoking and mocking videos. Imagine a contrary to trend web site that imposes an access time to visit its pages and a broadcasting station making fun of television and its characters. A broadcasting station that wants to limit its use instead of promoting the audience administering to the televiewer-user non-stop programs that meet the demand (when the demand already exists) or create an induced one when required. This is 56KTV Bastard Channel , this and much more.

First of all it is an online art project (it self defines as “an international online art project”,) created by Reinhard Storz art and theory of communications lecturer at the Basilea Art and Design University and author of the art platform xcult.org; he also collaborated with Monica Studer and Christoph van der Berg. Financed by the Swiss foundation for culture Pro Helvetia, 56KTV  presented in Italy last 11 November thanks to Next2Frame organization  it exists because of the works of all around the world artists who are supported by professional people that make up and bring their contributes out.

56KTV can be defined as a “bimedial” platform because it superimposes two media, television and web, provokingly upsetting their purposes. Its position is contrary to television market logics and internet freedom. In the era of media on demand (what you want, when you want, where you want, on the medium you prefer) Bastard Channel imposes to the web its temporal dimension. As they where in old-fashioned TV, programs are only available on fixed time. When the user enters the site there’s a list of active (so available) programs. And if the user wants to watch something which is not on the list he has to accept it and wait for its program time to come.

The user will probably wonder why there’s this absurd restriction. Bastard Channel says it “really doesn’t want to reach the audience in every moment” and that it is against “the TV and internet bite and run away approach.” In other words this strange web TV wants to make the audience reflect distracting them for a moment from the swallowing up of his usual media diet.

Let’s talk about 56KTV particular proposal. They offer a mix up of commercial images ( ZZZZZZap ) and an oracle-sphinx to which you can ask questions on the semantic of your life ( Sphinx ). There’s a lot of noir (even real noir!): a sequence of images taken from classical thrillers ( Crime Time ) and the TV series CSI scenes compared to real homicides ( Crime Scene ). You can download a comprehensive guide to programs where you can find programs titles, subtitles, and extensive descriptions of their plots or contents and obviously compliments to their authors. At the foot there are some suggestions to users: required plug in (usually Flash or Java), type of sounds (music, voice and noise), interactive level (from one + to three +) and how much the program can put to the test your powers of endurance (from  to three small balls i.e. very much!)

We watch Tv-Bot. Striking News for you. It’s the answer to usual television news, in other words it’s a preview of television news to come. This bot  i.e. a program acting as an “intelligent” agent  real time connects to webcams placed all around the world linking images to news titles in various languages. Here is an alternative way to be informed. Here’s a windows looking on to the whole world.