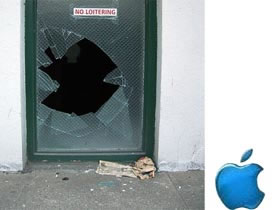 Have you ever thought that inside an African mask, the lines of McDonald logo could be hidden? Or that behind the face of the French Prime Minister De Villepin the Gaz the France logo could be found?

These are some of the Logo Hallucinations that Cristophe Bruno, French net artist, known because of his ironic and sarcastic drive, is posting on his weblog Logo.Hallucination, project that started last autumn and exposed for the first time at the International Meetings Paris-Berlin of 2006. Maybe Cayace Pollard, protagonist of “Pattern Recognition” and allergic to logos, written by William Gibson, would have had an anaphylactic shock in front of even one of these images, that would have made her suspect about the hidden presence of an industry logo anywhere.

A software developed by the programmer Valeriu Lacatusu, based on pattern recognition techniques with neutral nets, tries to find logos of well-known Companies potentially hidden somewhere inside the Net. Moreover, every time that something is found, the software sends an automatic image to the owner of the image, when identifiable, that warns about the potential infraction of the Intellectual Property Law, but even explain how to rule the situation. You can actually explain the reference to the logo, so make the company pay because of promotional publicity, or follow the non-declared exploiting of the logo, but incur in eventual measures by the offended Company.

The paradox is evident, but the provoking is not so hyperbolic. Digital techniques of image recognition are not so advanced, and that’s the reason why internet is still absolutely controlled by the word, even if apparently seems to demonstrate the opposite. Moreover, that Word is highly controlled and commercialized, as Bruno underlined in his project “Google Awards Happening”, where, talking about “Semantic Generalized Capitalism”, he tried to upset the dynamics of monetarization of words buying the Google Ads to write neo-futurist poetries. What will the Net turn into when the matching of the image will be implemented? When will search engines exploit patterns instead of words to address, model and build our sights in an economically valid way? And what will Marketing and Copyright minds invent to make some business from this?

We talk with Cristophe Bruno about this and some other consideration born from a work such as Logo.Hallucination.

Giulia Simi: How did the idea get started?

Cristophe Bruno: Up to now many of my work were dealing with questions of language and globalization, commodification of speech (http://www.iterature.com/adwords ). I felt that I had to move more deeply towards a field closer to the question of the image, but in relation to similar questionings. There are some previous pieces of mine that involve the question of the image in a globalized world. For instance “Fascinum” ( http://www.unbehagen.com/fascinum ), is about the accounting of the glance, as a global object. “Non-weddings” ( http://www.iterature.com/non-weddings ) is a hack of Google Image Search that tries to echoe some minimal semiotic structure. I had also made a performance in Dublin “Joyce Festival” ( http://www.iterature.com/bloodforsale ), which featured “the pervasive invasion of language by financial globalization” and in which I was walking along Joyce’s paths and collecting “sponsored epiphanies” related to logos and brands I was encountering in the streets.

But somehow these pieces were all hacks of an existing structure constituted by the architecture of control of language, ruled by search engines, and I wanted to bypass this structure, to bring my work one step further. But this is a difficult problem, precisely because this new architecture does not exist yet (image search engines for instance are in fact text based). So we had to build something from scratch…

Valeriu Lacatusu, the mathematician and programmer who did the software behind logo.hallucination, and who was working on image recognition and neural networks at that time, was very excited with my project. Then I met Jean-François Rettig of the Rencontres Internationales Paris-Berlin (where the project was exhibited for the first time) and we got a grant “Aide à la production” from the DICREAM. This is how it started.

Giulia Simi: Logo.Hallucination has a very ironic subtitle, anticipating the paradox of entire work: “We scan your intimacy to protect your privacy”. There’s a reference in this, about the practice of control investing the emotional side of the human being. How do you think that web dynamics, particulary those of web 2.0, can normalize and model our dreams and our desires? And what are the differences with the well-known system of control of TV? And finally, how could it change, in this sense, internet scenary when – and if – pattern reconignition technology will be entirely achieved?

Cristophe Bruno: Web 2.0 is an enslavement mechanism that I called “Taylorizzazione della parola” ( http://www.cosmolalia.com/readme100/index.php) in which there is an alliance between “societies of control” and the “society of spectacle”. TV is going to delegate its rudimentary control tools to the global structures of the Web, or more probably both structure will merge somehow and reorganize themselves… all this is being done right now: TV channels go web 2.0, Google buys Youtube etc… but both poles, control and spectacle, will get stronger. The former towards a pervasive “panoptic” structure of surveillance, the latter towards the global snuff movie. Both have one raw material: our intimacy.

This trend is a large scale trend: as the world-system reaches its limitations (depletion of natural resources, expected end of low-cost labour, the end of the ideology of liberalism, the fading of desire, etc.), capitalism uses the irony of history to relaunch its machinery by pushing back its internal limits. Thus freedom of speech is revealed to be the prerequisite for the scientific colonization of intimacy.

Cristophe Bruno: Not easy to say actually. Of course there is Gibson’s “Allucinazione consensuale”, But I remember that when I first thought about this idea of collective hallucination, I didn’t know Neuromancer. A few years ago, I wanted to do something about history seen as a collection of collective errors. But this term of error, of illusion, appeared to me not so relevant here. The term of error is too much linked to the question of truth and this is not what I had in mind: in the historical process, errors may be seen for instance as necessary illusions to go one step further, closer to some hypothetical truth… I needed a more radical concept, a concept which would be less in the realm of the modernist idea of progress. Hallucination is more radical.

The idea of “privatization of the glance” comes from a general tendancy that can be perceived in the history of the Web, in the history of net.art and in the transition from market capitalism to network capitalism as described by Rifkin (let’s call it from capitalism 1.0 to capitalism 2.0). The post-fordist ideas that are at play in the economical dynamics of global structures like Google are:

a) through a “dematerialization” phase, commodification of the ultimate “atoms” of human relations: (ad)words, gaze ..

b) establishment of 2.0 markets for these new commodities (long tails etc. ) and hence globalization of their concept (by definition, the long tail is an extension of the concept of the “fordist” object to the globality of the human desires)

c) global control of these “global objects” (ie privatization of the glance), before the unavoidable rematerialization phase.

In front of this trend, the crisis of national identities (cf the current french polls) are an epiphenomenon.

Giulia Simi: You often use irony as key element to unmask power dynamics hidden behind practices felt natural. Through irony, you create strange situations that bring new meanings in codified structures. It was the case of Google Awards and this one as well, where we can see an African mask near a McDonald’s Logo. Do you think irony as a privileged role inside new media art, that was born as re-appropriation and reinterpretation of instruments thought with an economic or military aim?

Cristophe Bruno: I guess the irony here is partly a reaction in front of the utopies that often accompany the technological progress. But it’s clearly not a particularity of new media art. However I think it has some links with the question of globalization (which of course is very present in new media art). After all, in front of the totalizing knowledge machines, irony recovers its original sense: from L. ironia, from Gk. eironeia, from eiron “dissembler,” perhaps related to eirein “to speak”. Used in Gk. of affected ignorance…