We No Longer Get Lost As It Happened In The Past 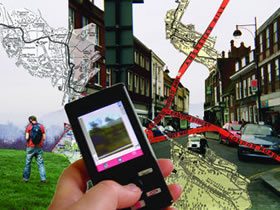 Locative media , the obsession of the moment. Thanks to new technologies all can be perfectly detected, since everything is nowhere and all is perfectly followed and spotted as a principle, placed in an universally known cartesian grid.

Some time ago critic public opinion seemed worried about the idea of living in a controlled society, as in David Lyon’s text
http://www.feltrinelli.it/SchedaLibro?id_volume=1741986 ; a society in which control devices with an unlimited power can watch every perceivable movement from above and from the inside and track it. Nowadays that worry seems generally overcome, the digital panoptic process seems accepted, while the attention has shifted to the social potentials of that process which apparently can involve anyone.

Satellite positioning military technologies has become commercial public domain , the operative basis of the more and more popular GPS. Surveillance cameras, which seemed to threat people’s right to privacy and their freedom of action, are now part of everyday landscape, sometimes can be accessible through the Internet and are used by car drivers to check traffic jams and find alternative routes in the city traffic. Cartographic database are publicly accessible to everyone through Google-maps and similar devices which enable us to zoom in on ( almost, but it is just a question of time) every corner in the world to see how it looks before you go there or maybe not to need to go there any longer.

The collective construction of geo-referenced database using tags links practical or poetic information, everyday life experiences, historical events and (most of all) commercial suggestions to every point and place. The net becomes a huge, endless atlas which constantly evolves, a map which, by developing, tends to coincide, using a Borges’ concept, with the actual territory that process is not only obviously useful, it has undoubtly an exciting, intoxicating side. The idea of dominating the world, which could be alarming if associated to a concentrated power, a totalitarian use or to obscure actors outside social control, becomes democratic and banal when applied to the net. Everyone can rule the world, watch it from above, track the most distant movements. Ubiquitous is the buzzword of the moment. We are everywhere, we can penetretate everywhere, we fully rule , democratically .

Yet, even if it could be hard to believe a person who moved his office to an Intel processor, who is experiencing a deep crisis while he is writing because he has not been able to connect to the Internet for more than 24 hours, who travels by plane every ten days on average and who daily look at online transport timetables, maps and international telephone call prices, what I would like to say is I feel all that sounds slightly disquieting, though maybe I am not the right person to express such feelings.

We could define it the longing for getting lost. I mean, we leave our home to go from A to B with the printout in our hands or the PDA showing us where to turn, what oneway streets not to take, the distance we have already travelled and that yet to be travelled, the time it will take and the possible dilays on our schedule. The transports, the times, the costs. The best route possible. GPS will kindly tell us as soon as we make a mistake or drift around. No surprises, nothing unexpected, if there are men at work over there, the alternative route is already available for you. At this time of day the traffic is too heavy, so better take route B. You just have to follow the instructions the system processed for you, house, street, bus numbers, name of stops. Just follow the instructions.

Along the way, all the commercial offers and available services, indexed according our consumer profile. And we cannot forget the omnipresent mobile phone which can always be helpful, in case you need extra assistance…We already know what to expect, we kow the destination, we do not need to make an effort to imagine what we will find.

To orientate is an ancient art, a slight knowledge which involves all our senses, our ability to adapt and interpret. An osmotic relationship with the environment, with the signs the outside world shows at a deeper level than that of road signs. An emotion involving learning and disquietness, curiosity and surprise, fear and confidence. Something which binds us to a surrounding territory that is stable, slow, settled, built on different cultures, habits and knowledge, where you move with respect.

From that point of view to get lost becomes a concrete and sometimes fruitful option, a way of reaching consciousness limits which can show new horizons. To get lost is a precious chance which might be soon lost. Lost in an overload of information and user instructions, can getting lost be a way to find ourselves again?

Well, I must stop my article here, I have to go to the veterinarian to have a microchip implanted into my cat, it’s the law.