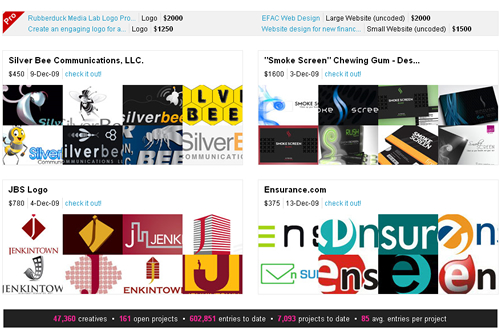 It was maybe predictable and it is definitely significant: Creative Review‘s has included crowd-sourcing among the topics covered in their ‘Year in Review’ December issue.

I haven’t checked the magazine yet, but I am researching on digital creative crowd-sourcing models since a while and I think they represent such an interesting opportunity for creatives that we should celebrate here.

Known in academic terms as a “distributed problem-solving and content-production model”, and in marketing ones as “the outsourcing of functions normally performed by a supplier or contractor to a crowd of people or a community”, crowd-sourcing is a neologism first used by Jeff Howe, editor of Wired US, in an article that dates back to 2006. There, he describes the shift that creatives (mostly copywriters, designers, photographers, illustrators, animators, videomakers, directors… or wannabe so) are taking in the networked society.

With the development of web technologies and communities, in fact, the global creative workforce is finally connected, and can finally be active online. Thus, it can decide to move from being represented by offline exclusive and expensive agencies to online accessible and inexpensive platforms

It has all started with websites like Istockphotos.com, a marketplace developed for non-professional photographers that allows anyone to upload his/her own works and to sell them directly to clients, at a fraction of the usual costs. This way, talented emerging artists are now competing with the privileged establishment, and cutting all middlemen and their top rewards. As content producers, they are earning more and they are allowing their clients to spend less than before (for products which are as good as the average professional ones).

So far, so good. These new adventures are just confirming the crowd-sourcing principle that a creative collective can produce better (and cheaper) results than an individual, and making it real. As many other times in the past, technology is slowly but steadily disrupting the status quo of an old industry and creating a new one. But then, even more disruptive stories follows.

With 99desing (AU), BootB (IT), CrowdSpring (US), IdeaBounty (SA/UK), RadarMusic (UK) and Zooppa (IT/US/BR), a new crowd-sourcing model for creativity has emerged. On one side, these new online marketplaces/communities engage with brands offering them the chance to launch contests on specific briefs and get bespoke creative proposals… for smaller fees than those of the traditional agencies. On the other, they engage deeper with professional and non-professional creatives allowing them to participate to real global competitions, based on real brands’ briefs… and to participate easily and remotely, i.e. wherever they live and whatever else they are doing, without any agency to represent, and exploit, them.

Furthermore, some of these platforms even delegate to the community the selection of the best entries. Because, again, in the web 2.0 ethos, we are better than me.

Everyone happy? Not yet. There is a problem, in fact… Maybe even two or three.

1) – With these platforms, all participants need to do their bit as speculative job and have very limited chance to win. In the offline advertisement industry the pitch-to-brief system has always been the custom; online this process has reached another level: in the average, there are loads of contestants for every project and just little reward for the winning ones.

So much so that a proper professional movement called ‘no-spec job’ has recently made a lot of noise against this practice, based on the assumption that open and cheap competitions are unprofessional and unfair. At the same time, the brands, platforms and users that instead have embraced this model, reclaim the freedom of choice: once that the process is clearly presented, everyone should be free of participating, considering pros and cons from a personal perspective. And in fact, while some have probably kept doing things the old way (they maybe live in big metropolis and have loads of useful contacts), thousands are instead sending now their ideas and projects through these platforms, and hundreds are gaining valuable visibility and good money (that would have not obtained otherwise).

2) – the average quality of the outputs isn’t that bad, but isn’t even that good;

4) – when the selection is not up to the community, it can be definitely too time-consuming for anyone in the industry…

All in all, maybe a new breed of online platforms/agencies is needed, one that will maintain traditional agency project management and campaigns creative curatorship while introducing new remote collaborative practices. And, in fact, a revised model, based on both top down and bottom up principles, has recently been adopted by one of the ‘old’ platfroms, GeniusRocket (US), and more will probably follow.

In their words, ‘We have always understood that crowdsourcing is a process of evolution. From that, we believe that there is still plenty of room to improve upon creative crowd-sourcing. We plan to address the three biggest requests of the creative community; higher awards, more feedback, and less risk, while addressing the request of the client; more polished, selected, creative content.’

How are they planning to achieve it? ‘ Launching GRSelect. ‘The three most important differences between GRSelect and other crowdsourcing sites (including GeniusRocket.com) is that artists will be required to apply in order to participate in each project. First, applicants will be vetted based upon their past work and their submitted proposal.  Second, GRSelect projects will work across iterative rounds allowing the artists to receive feedback directly from the client prior to production or final submission. Finally, while not everyone will be accepted to participate in a project, everyone that does make into a project will earn awards based upon their efforts.’

Now, this sounds really good. And this is even becoming a trend: in the last few weeks, a new platform based on the same mixed approach has been launched, and it is called… Victors and Spoils (US). While another one will be launched soon, with the name Guided By Voices (UK).

Creatives out there, no more excuses! Now you can submit your portfolios, be selected, participate to contests, and win your 15 mins of glory and even some pocket money (that now can reach peaks of 10K$), without risking to waste too much of your time. And, yes… Next year you could be on Creative Review.