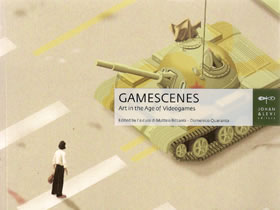 John & Levi is one of the house editor to keep on eye on. The Milan editor, that already published a monograph about the artist Mauro Ceolin , return in the library with GameScenes. Art in the Age of Videogames, an ambitious and successful roundup on “Games Art”, a term that designs the work of a series of artists that compare with the videogame.

The work suddenly manifests its international work, both in the section artists, both in the bilingual texts. In its complex, it’s a unique experience, optimized by a rigorous cleanliness of the graphic, enriched with images of works by “Game Artists” exposed in the text.

This book prosecutes the activity of his authors Domenico Quaranta , curator and critic of art, intervened even on Digimag, and Matteo Bittanti , author of numerous essay and articles on videogames, cinema and new media, as well as one of the maximum expert in the area of “game studies”. Bittanti is both researcher at the University of Berkley and Stanford and curator of the web site videoludica – game culture . He works as well with Gianni Canova at the editorial series Ludologica. Videogames d’Autore .

The presentation of this book coincided with the inauguration of the exhibition GameScapes. Landscapes and cities of videogame by five international artists , held in Monza together with the World Cyber Games and anticipated by a comment of the same Matteo Bittanti on the GameSetWatch , blog that referred to an unknown editorial project. We can talk about this project, no more unknown, with its creator: Domenico Quaranta and Matteo Bittanti.

Paolo Branca: According to gamescenes.org, the book “GameScenes. Art in the age of videogames” is the unique dedicated to the “Game Art”. What do you mean by “Game Art” and which are the motivations that brought you to the dealing of this argument?

Domenico Quaranta: In my opinion, “Game Art” is one of the provisory terms that give evidence to a cultural phenomena in a phase that, even if they are under everybody’s eyes, it’s intentionally not talked. I’m not casually talking about “cultural phenomena”. The Game Art is not a movement, that is a product of a group of artists that share the same cultural prospective and aesthetic and choose this term as a tag. It is not even a style, as the abstract expressionism, and not even, as the Video Art, a complex of heterogeneous works associated by a medium. This is the reason why it’s provisory. When the public and the critic will understand the contemporary art is comparing with the video-ludic media, there will be no reason to talk about this. It is now necessary to indicate the work of artists that, starting from totally different cultures and languages, converged on the videogame world, using it from time to time as imaginary source, as place of elaboration for new aesthetics, as narrative port and creative media.

Matteo Bittanti: Game Art is an umbrella term that refers to those form of artistic expression that use the videogame as vehicle, instrument, starting point and, sometime, as arrival, as the artistic mod attest. The Game Art stay between the productive and cultural different forms. And it is the anomaly of this meeting/clash that gives it an interesting nature. Beside, the innovation realized inside the joint. As all the definitions, “Game Art” has an ideological more than scientific function.

Paolo Branca: The book in its 450 pages proposes the heterogeneous work of more than 30 artists. The effort of each one present unique characteristics and realize recognizable art forms such as painting, sculpture anf photography, but even new practices as the pixel-art, the game modding and the circuit bending. In spite of this, it is possible to individuate common and typical operative modalities?

Domenico Quaranta: I’d say that the macroscopic tendencies are essentially two. The resumption of the pop imaginary, of the videogames heroes or aesthetics or their use as medium. Often they’re both found in the same artists, as in the Eddo Stern sculptures, that recall the neo-medievalist aesthetic of the role online mass game accompanied by machinima elements or, in a case, ( Fort Paladin: America’s Army , 2003) a game ( America’s Army ) literally played by a sculpture. An interesting big under-category is the retrogaming, that consists in recalling the old console and the old heroes living in that world, that have a corresponding “retro-aesthetic”. In my closing essay of the book I tried to individuate some other different transversal tendencies, relative at the aesthetic area. The dialectic of the photorealism, typical of many commercial videogames and the research of the abstraction typical of the Software Art, strictly related to the Game Art. The accentuation of some stylistic elements of the videogame, from the isometric prospective to the polygonal structure that I called “video-ludic baroque”. But I think that, in the complex net created by GameScenes, the game of individuate connections could be very amazing, and it’s up to the reader.

Matteo Bittanti: The reading keys – as the typologies of intervention – are numerous. One of the most repeated theme is the application of the aesthetic and the video-ludic phenomenology from a digital context to the actual one. I’m talking about artists such as Aram Bartholl, Damiano Colacito, Nicholas Bertke, Micah Ganske that generate cognitive dissonances applying the modus cogitandi and the aesthetic imaginary of the videogame in real life situations. The opposite tendency consists in introducing inside the video-ludic dimension themes, phenomenon and instances typical of the real. I think about the intervention of Joseph Delappe that upset and destabilize the presumable magic circle of video online game to make more aware the player on events such as the Iraq war. These two tendencies, contradictory and together complementary, one isogenies, the other endogenous, are symptomatic of an intense dialogue between the play dimension and the society tout court . It doesn’t have to astonish that this conversation is more interesting and stimulating than the one between the video-ludic industry – conservatory, distrustful and childish – and the society, a conversation dominated by old themes such as the violence or the medial dependence. Just try to confront every communicate from the generic software house with these words by Enrico Mitrovich : “I think that videogames are, not one, but The form of art that characterize the 21 st century, such as photography for the 19 th and cinema for the 20 th . If Arnold Hauser could insert in his “Social History of Art” a new chapter, I have no doubt it would be about videogames [] Other traditional languages (painting, installation, video), dying, tired by the avant-gardes, talked by tons of conceptual interpretations, are no longer able to appropriate the complexity of the real as a videogame can do”.

Paolo Branca: “Game Artists” have a relatively new imaginary and culture, the videogame one. What’s the relation between the reasoned art and the one realized before the advent of this medium? Is it possible to trace a continuing line?

Domenico Quaranta: WIthout any doubt, even if you must transcend the idea of Game Art to deepen the specific works and artists. For example, painters as Miltos Manetas and Mauro Ceolin denounce a strong reflection on the occidental paint tradition, from the still life and the intern paint to the landscape and portrait tradition. The reflection about the cinematographic middle is strong in artists such as Nicholas Berkte and Palle Torsson , while the reflection on bodies from the 70’s has its promoter in Susha Niederberger . And obviously, these artists have strong relations with Pop Art.

Matteo Bittanti: The heterogeneity of the artistic expressions vanishes every attempt to generalize. Talking about continuum is legitimate, but the collateral effect is a tendence to explain the new under the light of the old – the “rear-view mirror” phenomena, using the words of McLuhan. Anyway, announcing revolutions and transformations without taking the millenary evolution of the arts into account means making a big historical imprudence. The game is a standard procedure old as the human being, but the videogame as medium and it’s artistic, aesthetic, cultural implication made possible are a recent phenomena, old less than forty years. I leave to the player, I beg your pardon, the reader the work to trace possible trajectories and individuate braking points so that they can increment their GameScore { Achievement Unlocked }.

Paolo Branca: Works of “Game Art”, for example inside Eddo Stern, Marco Cadioli or even the duo Jodi works, are realized using commercial videogames, that are ductile for the creativity of the artist. The software houses have longer understood the tendency of gamer to modify and use creatively the medium, giving some instruments inside the game to encourage this inclination. Progressively, lots of prejudices are falling. Words such as Machinima and Second Life shine in an irresistible appeal, not only for video-player, but also for those who works into the art system. Genial marketing practice or better evolution of a media?

Domenico Quaranta: Neither the one or the other. Rather, we’re in front of a changing in our way to understand the medium. Something similar happened fifty years ago with the cinema, when a group of critics and directors started calling its “author” those that were considered no more than employee in a mass cultural industry. It’s time for a video-ludic Nouvelle Vague, and to get there Game Studies are necessary. Both realized that videogame is a complex medium, with languages used to develop cultural objects with a high quality. The videogame is art. But pay attentio: Game Art is something else. Between the videogame as art and Game Art there’s the same relationship that exists between Psycho and an Andy Warhol movie. In the first case, we’re in front of a product of the mass culture, a masterpiece that follows the rules of “its” art (cinema, videogame). In the second case, we’re in front of an artist that creates a masterpiece following the rules of the contemporary art, often disagreeing the product of the mass culture it refers to (cinema and videogame).

Matteo Bittanti: The examples you mention are forms of user-generated content , standard procedure of re-writing, revision, transformation of a source text – deliberately left free – by technique that go from the using of resources similar to the text – so foresee by the producer – or exploiting bugs, programming errors by the consumers , that generate unexpected and unforeseeable situations. I’m thinking at the first game video by Miltos Manetas, a machinima ante-litteram that exploited an error in the code of a fly simulator. The videogame – more than others media – forced us to reflect the notion of author. In fact, it introduced a new way to participate in the production/distribution and textual consume. Lev Manovich wrote that artistic avant-gardes have been take on by the software. Beside, I think we should talk about videogame in a more specific way. Undervalue the innovations of the experimentation and collaboration forms that this medium made possible generate system errors and blue screens.