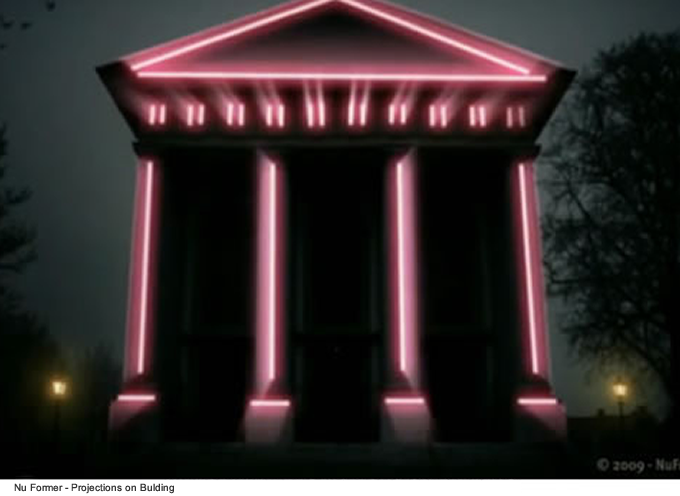 Lev Manovich once said that the deep change which is affecting culture in the era of computerized media revolution also concerns space and its representation and organization systems. Space becomes a media itself: Just like all other media – audio, video, images and text – nowadays space can be transmitted, stored and recovered in a snapshot. Space can be squeezed, re-formatted, changed into a flow, filtered, computerized, programmed and interactively managed (L. Manovich, “Il linguaggio dei nuovi media”).

Manovich also said that if all actions take place in a near future within the virtual and simulation space, the screen – which is the last appendix of frame perceived as divided physical space that prevent the observer to move – will completely disappear in favour of a shaded compositional effect which looks for “fluency and continuity”.

The virtual reality will reduce to a chip implanted in the retina and connected to the net through aether. From that moment on, we will bring with us our prison, not to happily confuse representations and perceptions (like in cinema), but to be always in contact, connected, linked. Retina and screen will end up being the same thing. 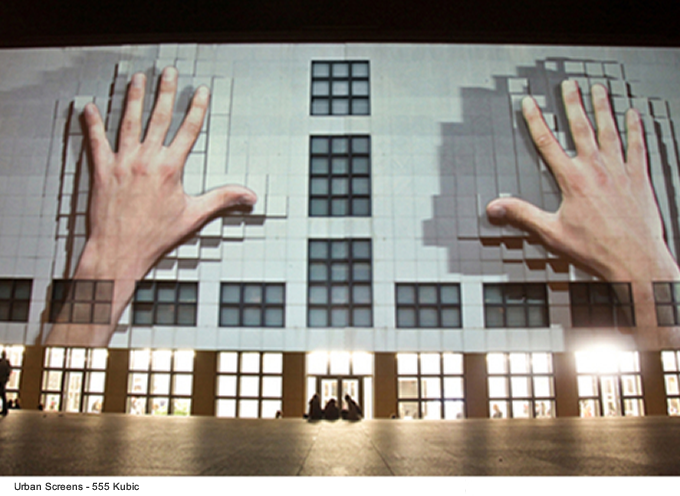 Screens have not been eliminated but rather widened. The main feature of scenes in the last years was in fact the phenomenon of gigantism. People speak about “hyper surfaces”, “interactive media facades” when referring to those permanent or temporal architectural walls, aimed at hosting bright and coloured surfaces, mega projections and plasma screens. Giant projections with images and writings are part of the metropolitan landscape and form the basic of advertisement equipment. Digital signage reach enormous and terraqueous formats (e.g. the 24 m advertising maxi screen put on an airship and visible from 4 km).

The ultimate medialization of urban context is nearer than we believe and corresponds to the great dimensions of advertisements of the great distribution: megastores, supermarkets, fairs, non-places we go through and patronize everyday and which are the subject of Stefano Boeri and Vittorio Gregotti’s book – sponsored by Marc Augé – “La civiltà dei superluoghi” (The society of super places).

According to Simone Orcagni, the experiential dimension of public space, squares, stations and undergrounds is linked to the more intimate, individual and television one through multidimensional schemes: “Media, city planning and performances concur to form a new spectatorial experience, which is partly also cinematographic” (intervention in “Il sole 24 ore on line”).

Urban architectures and large public spaces host special events, 3D video projections and led screens placed on building walls: urban screens, architectural mapping, facade projection, 3D projection mapping, video projection mapping, display surfaces, architectural Vj sets are only some of the words used in this field, which is called “Augmented Reality” (even if Lev Manovich prefers to speak about Augmented Space because there is an overlapping of electronic elements in a physical space). This is a technique that makes reality and its digital reproduction interact and modifies its visual perception overlapping it until it is totally twisted also in its dimensions.

Starting from these experiments of “augmented reality”, video works of art have been created in a “site specific” way and with great dimensions. Even theatre shows have been created with a virtual scenery/actor with 2 and 3D mapping and an absolutely real effect. 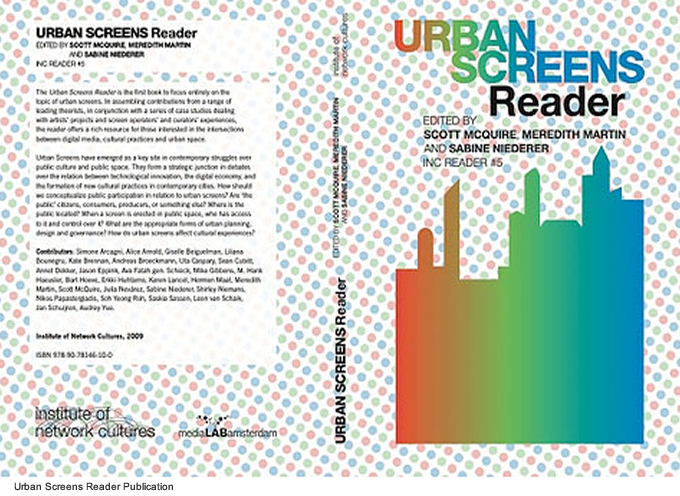 This phenomenon is reaching wider and wider dimensions and an international diffusion, so that it has also been the topic of many international conferences organized by the International Urban screen association, as well as of various events (in Manchester and Amsterdam) and of specialized literature which can be completely downloaded from the website Networkcultures.org

For any further in-depth study, we suggest you to read the article online titled “Public space and the transformation of public space” and also the special edition on the Urban Screen published in the peer reviewed journal “First Monday”.

Important characters in this field are right the Urban Screen, architects specialized in digital displays and installations, also in urban areas. They were born as group in 2008, but have been working in this sector since 2004 with headquarter in Bremen, Germany. They work in the field of entertainment, advertisement and show business using new digital medias and video projections.

Open to cooperation with artists who work in the field of motion graphics and video, they created a new kind of public art, strictly digital. The artistic operation they inaugurate with techniques and programmes suitably created is an operation which foresees an accurate surface mapping (the question is right an exact homographic study) and the projection of a video or animated digital covering, perfectly shaped on the architectonical background. This creates extraordinary events and tridimensional effects, as much improbable as phantasmagorian.

The perception illusion, in the most successful cases is the illusion of a “liquid architecture” which adheres as a film or can be detached from the real surface. Particles of surfaces as Lego bricks try to create an optical illusion with a strong impact, everything under the eyes of an unaware public or people who do not distinguish between the real and the virtual architectonic frame. This technique has been immediately bought by great International brands for advertisements and the launch of new products. The technique lets make out also a possible performative digital use which would definitively combine video art, installations, graphic art, light design and live theatre.

House and church façades with single architectonic elements which break up, become moving pictures/paintings, enriched by light and colour stains that modify according to the music, digital characters climbing on windows, doors, roofs in this new medial and medial-performative art. The theatre borders have become wider and wider: the environment acts no more as background but as work of art itself. 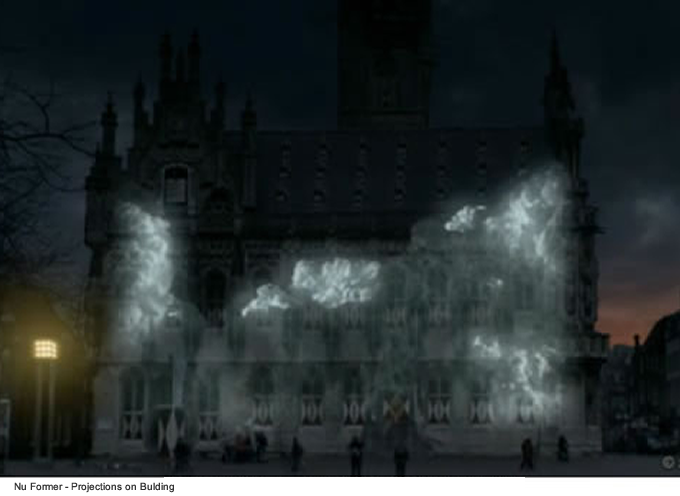 Urban screen explains its work by saying: “Through our experience with scenery architecture we developed a procedure for projections adapted to surfaces and we created the socalled LUMENTEKTUR. Through the exact measurement, the projection was perfectly adapted to space. This allows having a direct point of reference and interaction with the background. Therefore, beside being a technical registered procedure, LUMENTEKTUR has also become an important approach to creative process. The overlapping of material structures with a virtual covering that completely covers them opens in fact the way to a creative potential that we are sistematically aiming at.

555 Kubik is maybe the media-façade event that made them more famous: architecture becomes a moving TASTIERA which a hand is layed on and follows the movement of. The architectonic feature of the building and the 3D projections contribute to the perception of an “augmented reality”. The application of this technique to theatre is also very interesting, since it creates an idea of hologram. The same happens in Goodbye in cooperation with the Bremer Theatre. In the same way, in Jump! the building façade becomes a sort of free climbing wall or circus arena for jumping and climbing actors who hide among the windows.

The NuFormer Digital Media work in the same field. It is a company located in the Netherlands, specialized in digital communication, motion graphics, digital films and 3D projections for events and advertisements. Their most extraordinary work of art is Projection on building, whose video was presented almost by all digital art sites, asserting the success of this very special new artistic form.

In order to have a more specific idea of the many proposals in this field, please visit the videogallery of the channel I love mapping on the website Vimeo.com. 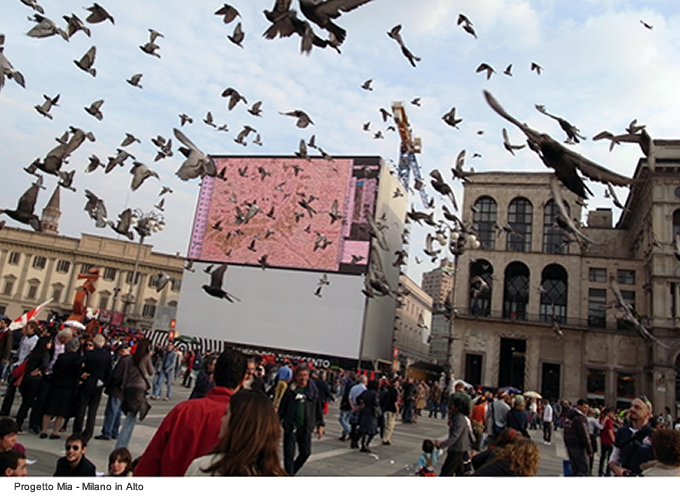 Live backgrounds with LED maxi screens for concers on building façades have been inaugurated in Piazza Duomo (Milan) in 2008 during the opening of the event “Salone del Mobile” (the forniture fair) with Christian Fennesz‘ concert and Giuseppe La Spada‘s visuals. It was an event signed by the Italian company Urban Screen Spa, which received the first urban medialization project in Milan with a mediafaçade of 487 square meters (Arengario worksite, Piazza Duomo in Milan, Progetto Mia, Milano in Alto). Mia represents the greates multimedial LED architecture ever presented in Europe.

Manovic – in one of his essays on this topic titled “The poetics of urban media surfaces”, dreams of a union between material and immaterial architecture: “Architects together with other artists could go a little bit forward and consider the ‘invisible’ space of electronic flows as a matter instead of a vacuum, i.e. as something which needs a structure, a politics, a poetics”.