Voom, By Robert Wilson:the Surface Of A Myth 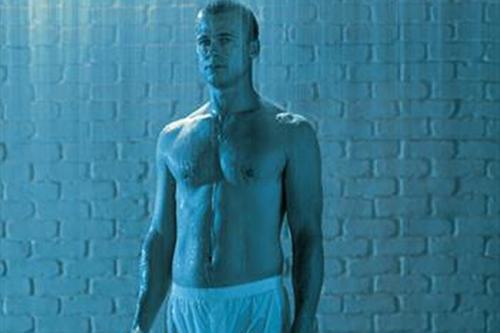 There is a figure which seems to stop the time, move with care along its borders, fly above it, go through it but then sit outside it. It is a man who wears only his slips and stand in front of us, fixing us. Above us the rain begins to fall. The light is steered by a blinding intense blue which looks like a chemical color lent by Klein’s imagination or by the fluorescent lamp of a sleazy club.

We sight his face, the clean cut of his chin, his opened and selfconfident eyes. It seems that we know him. That face is Brad Pitt’s one. Just a few seconds and we see a man of the same age with the neck wrapped in a sort of fox-fur. The man is very elegant and wears a hat which hides most of his face. But we immediatly recognize him: he is Johnny Depp.

Robert Wilson created a portrait gallery between agiography, irony and glamour, titled Voom, where very famous celebrities are represented in a minimal and dreamlike space. Robert Wilson is one of the best known and influent person in the world of visual art as well as theatre and music (remember among the other, his cooperation with Philippe Glass in Einstein on the beach, which was planned and directed by him). After many years of study in different fields, from his first degree of Business Administration, to his Bachelor of architecture at the Pratt Istitute and painting in Arizona, Wilson founded his first theatre company: the Byrd Hofmann and School of Byrds. Thank to this school, he began to be known as one of the most extreme and brave experimenters of the second half of XX Century. In his theatre shows, videos, sound landscapes and lights coexist on different levels creating incredibly fascinating and fawless shows. His style is liked to a strong plastic component, as it would harden the dynamic forms of theatre in a single, standing matter highly studied in its volumes but at the same time dissolved in time. The variety of his knowledge allowed him to reach many different fields in the world of visual art and also to get many awards. Among them the most important is the award of the Biennale di Venezia in 1993.

This video serie presented at Palazzo Reale in Milan the last June and exposed until the next 4th October travelled through the most important museums and art galleries worldwide. They were created within a cooperation with VOOM HD Networks, i.e. a company roducing hi-technology.

There are many Celebreties involved, from Winona Ryder, to Johnny Depp, Carolina of Monaco, Salma Hayek, Suzushi Hanayagi and last but not least the beautiful Italian Isabella Rossellini. At first sight this video-performances – this is the right name – are extremly involving since the tableaux vivant is perfectly created and thank to the high resolution of the projections which seem to come from an almost parallel dimension. After this first stylistic feelings people are involved in a second cognitive level where the meeting with the represented celebrities (going from the cinema to a most recent artistic research – think to Barney…) shows the author’s mythopoeic trend.

Robert Wilson works through implications. He approaches the celebrities to their world, playing inside it but reversing its terms. The references go from Hichtcock, to Grace Kelly, to the wonderful Greta Garbo. His visual works of art are similar. Only David LaChapelle’s representation is different. Despite the research field has changed in that world, showing these videos and the cinematographic world through the time, makes the public live a new and more sophisticated artistic-video experience, which allows the author to enter in the luxuriant glamour of the Star-System.

I would mention some hystoric examples which can be placed side by side with Wilson’s works. A little bit predictable but right exaple is the reference to Bill Viola’s last production, because of its temporal tension as well as the focus on high tecnologies and the contemplation needed while assisting to the projection. On the other hand, a more clear and contemporary examole is Steve Klein photograpy. He is a well known fashion photographer who uses the surfaces as provocation to fill up a painting full of visual and androgyne braveries.

Wilson’s works could arouse the legitimate or malicious suspicions on the real intentions of a so specific research of the visual text. The “recycle” of the Star-System by artists has always been ambivalent. On one side there is the celebration of a myth and his notoriousness, and on the other side the celebration of the anti-myth. Maybe it is useless to list all the other references going among the others from Ray, to Dalì, Warhol, Barichello and Grifi. Wilson’s works put us in front of an ambiguous resolution: what epoque do these portrait belong to? Are we really watching the last revival of a pro-Hollywood interest which is extinguished and emptied by the Warhol’s children? Or are we standing in front of the celebration of surfaces and myths looking for their real meaning running away from that light always covering it?

In my opinion Wilson’s works are a mix of wiliness supported by a very respectable and well known personal biography. He wanted to celebrate his own myth with everybody’s myth, invading with his art the vacuous and etern myth of celebrities, like a Urobolo in the impossible construction of his circle