Less Talk, More Action. An Interview To The Yes Men 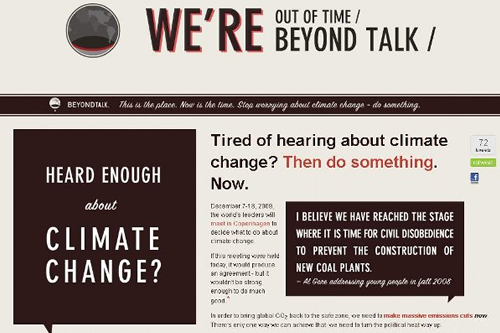 Over the last months, in the middle of the turmoil for the mobilizations in view of the Copenaghen COP15, an interesting coordination platform has been online for the movements that takes the name of Beyond Talk.

The platform, that in the homepage is named like this: “Tired of just hearing about climate change? Then do something. Now” is a simple data base for the promotion of civil disobedience statements. The authors of beyondtalk.net are Andy Bilchbaun and Mike Bonanno, the members of the famous culture jamming group The Yes Men that for 10 yeas have been raging on the scene with mediatic ambushes and ambuscades and over the last year have been focusing their deeds on theme connected to the climate change.

Without entering in the details of the single deeds carried out by Yes Men, I find it more interesting to stop and consider that sign of pragmatism expressed by the formula “Beyond Talk”. Indeed if we have a look to what is happening overseas far from the Old Europe, the culture jamming of the Yes Men makes a deep impression not only because of the vast mediatic echo and his communicative incisiveness, but above all especially for his approach that privileges practice and results in spite of any other abstractly theoretic issue. This seems to me one of the main elements of distinction at the moment between a European art-activism and an overseas art-activism: if in Europe it is the conceptual-political system in particular that affects the possibilities to put it into practice, In USA it’s the final result and its efficiency that seems to be taken more in consideration.

So, as I recently found myself actively cooperating with some of the last deeds of the Yes Men, and pushed by curiosity to better understand some of their dynamics, I felt the urge to ask them some questions. Simple questions, but that out of awe, I wanted to polish a bit more, in order to find the right shades of significance. After less than 24 hours from the delivery of the questions I received their answers that-with a bit of disappointment, I must say –, as you will see, don’t leave space to any particular reflections, or theoretic digressions.

Beyond the usual talks, the Yes Men replied with few words, simple but brief. Beyond Talk, that’s it. In other words, another lesson of Anglo-Saxon pragmatism.

Clemente Pestelli: Differently from other past identity corrections, It seems that actions like NY Times Special Editions,the above mentioned NY Post and the last spoof to the Chamber of Commerce, are not just identity corrections. It seems you want to exploit the media in order to spread stories about hope. How do you expect people to react to these stories? And how did people actually react?

Mike Bonanno: People generally have a chuckle at these stories… with the NY times people visibly reacted with great joy. You can see it in our film! With the NY Post and the Chamber action we got lots of virtual high-5’s. We also, of course got the Chambers Reaction: they slammed us with a lawsuit and are threatening our free speech. Silly bullies.

Clemente Pestelli: Behind the Yes Men there is a large network of activist, artist and culture jammers. What is the role of this network in your actions?

Mike Bonanno: We rely on our friends – the unseen Yes Men – for everything and anything! Each project is different – but anyone can sign up to www.theyesmen.org/join and volunteer. We might just get in touch for future action.

Clemente Pestelli: I think the history of The Yes Men is strictly connected to the history and the practices on the world wide web at the beginning of 2000. How do you evaluate the situation of the Internet today? Is still the net utopia of the early ’90s and ’00s alive? What is different?

Mike Bonanno: The net utopia never existed, like all utopias it was an imaginary space. Aspects of that imaginary are holding steady and growing, others are shut down. Laws like the DMCA have made it easier for companies to clamp down on free speech, but the proliferation of connectivity has made it easier to speak to more people. So, its different – the changes are too vast to count, the important thing is to try to prevent capitalism from turning all the connectivity into nothing but wealth extraction.

Clemente Pestelli: Talking about internet, beyond the mediatic echo of your actions, you’ve always worked with net-based alternative platform – like the former RTMark experience or the above mentioned beyondtalk.net, and the recent net game Fix World Challenge. Can you elaborate more on this interest for net based media?

Mike Bonanno: The interest is pretty straightforward: cheap ways to connect people. If we were back in the 70’s we would probably be using phones, fliering, printing newspapers, etc.

Clemente Pestelli: I’m a bit curios about the economic sustenaibility of your projects. Who supports your actions? I mean, is it “just” pure grassroots networking or does any organisation support those kind of project?

Mike Bonanno: We have gotten some money from arts grants, and to make the films we have gotten some TV money (not enough to cover costs). But overall its the people on our mailing list that support these things – and they dont cost that much.

Clemente Pestelli: In june 2009, on the spoofed International Tribune (http://iht.greenpeace.org) we could read about “A TURNING POINT FOR THE PLANET” at the Copenhagen Climate Summit. According to latest news nothing of this is going to happen. After more than ten years of Yes Men activities, shall we continue to hope that it is possible to change the world with a prank?

Mike Bonanno: We dont change the world with pranks, we do it with movements. And everything that goes into a movement- street protest, law changing, neighborhood organizing – needs to happen. That is why we need to be out on the streets now. Sign up to www.beyondtalk.net and mark the date: Nov. 30th