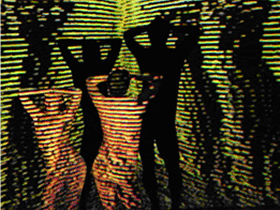 With their pros and cons, the real time process software for sound and image flow have an influence on the quality and organization of the today’s audiovisual performances.

Each specific program has a pretty precise address: software deriving from Max MSP (that a time was 0+55 and now it is Jitter) are highly flexible, but addressed for programmers and experts, while vj-oriented software as ArKaos o Resolume are limited by an extreme scarcity in available options. In the mid you can find Isadora software (now it is available only for Mac e in beta phase for pc). That’s why in this number of Digicult we decided to interview its creator, Mr. Mark Coniglio.

Starting from his work together with the multi-media theatre-dance group Troika Ranch and with Ms. Dawn Stoppiello , Mr. Coniglio has developed an extremely flexible and intuitive platform. From the early focus on interaction with performers, an interaction based on sensors and control upon MIDI packets, up to now Isadora controls a big amount of properties, from the most traditional video effects to the real time realization of complex 3D files. Moreover this software allows a multiscreen sincronization. All this allows the creation of a high level of interactivity and flexibility not imaginable some years ago, apart from working with a hard programation. The Italian public could appreciate the this software potentials through the works by Claudio Sinatti, Otolab e Softly Kicking.

Bertram Niessen: Let’s start with youwhat about you?

Mark Coniglio: I’m a hybrid being: half a programmer, half an artist. Of course I have been programmer since the early youth, in fact I started working as programmer when I was 16. Then I started discovering my passion for music and I studied music theory at the college. After 4 years working by a discographic company (mostly as productor), at the age of 24 I began to study seriously music composition, that’s why I attended the California Institute of the Arts.

That was the change, because then I became student (and afterwards assistent) of Mr. Morton Subotnik. In the time spent in the California Institute I passionately studied composition, but I also created some softwares for Mr. Morton’s tracks (for istance the multimedial performance. “Hungers” e the camera’s work “Key to Song”). Because of Mr. Morton’s influence I started creating music and software expressly for interactive performances. And this has become my way of working.

In 1989 I discussed my dissertation, a piece called “The Need”. It dealt with a multimedial theatre-dance collaboration referring both to my software Interactor (created together with Mr. Mortimer) and to my new Mididancer sensor advice. For several points you can say that this was the model I kept in mind for the creation of Troika Ranch, 5 years later.

Bertram Niessen: And so, how much tied are your work with Troika Ranch and your life as a programmer?

Mark Coniglio: Well, as programmer I can realize easily the works I have in mind. Although I am famous above all for my software Isadora, I am in first place a componist. I go on composing all the musics for Troika Ranch , for example. The thrigger for all my efforts as programmer is my interest for new interaction systems allowing the performers to understand my music and video creations.

In my opinion the fact that performers own the control on their performance environments plays a pivotal role when you work with systems based on digital technologies. The bit “one” and “zero” of the pre-recorded medias cannot change and consequently each performance is the same as all the othersjust as listening to a serial CD. Butif the performers could use their actions to master the media, to manipulate and rule the bits according to their art insticts, here you see something different. This manipulation can have different forms.

In the first examples, as for instance in “The Need”, the work I spoke above, all what you could do was manipulating the MIDI signals sent to music sintetizor and different samplers. That allowed to create a music backing or a soundscape. This was dued to the lack of calcule power in real time video and music processing of that time. Now we have several ways to do it.

Bertram Niessen: When you launched the first version of Isadora did you expect such a success?

Mark Coniglio: Honestly to speak, not so much. Isadora was the result of a several attempts for real-time video process, but it presented a lot of crashes for the public. And that was just inacceptable. So I said: you have to do it yourself, also the software customization for my art needs. After showing it at the Monaco Dance Forum in 2000, a friend of mine appeared to be interested in it, and as a consequence he raised interest in one of his friends. There I got I could sell a couple of douzaine copies, what would have allowed the survival of Troika Ranch. What came next, as everybody says, is history.

I tell you an episode that I think important for the software success. In the first days, Dawn Stoppiello and I often had some workshops about interactive performances, and we used Isadora as mean for letting students realize their ideas. Mrs Stoppiello is a choreographer and not a programmer, as a consequence she could explain me some passages that were hard to understand from the point of view of an artist. What’s more, in the workshops I saw some people using Isadora, so I could see where they found problems or got difficulties.

I answered these problems modifying the software in order to make it easier,and to help the lays in using it. This development process lasted some time, and brought to a product pretty easy to use for those who are not experts, without renouncing to the desired complexity for more experieced people. This combination between easiness in use and complexity for experts is the key to understand why this software has become so famous.

Bertram Niessen: The Isadora’s community seems to be quite open and friendly. How much influence has this network in your way of working?

Mark Coniglio: I think you can say I established the standards. People often remark my generousity, but I believe it has to do with my Italian cultural heritage (my grand-grand father came in America from Sicily to build the transcontinental railways). You are also Italian, so you know that life experience is centred on family, that’s why I suppone to imagine the Isadora’s users as a big family.

Thanks to mails and the Troika Tronix forum it seems to me to bring a virtual kitchen all over the world and we speak about the work we are doing, how we could improve itunfortunately the virtual wine is not so delicious as the real one. On the whole, what is really amazing for me is to see so many artists using the instrument I created to work with public throughout the world. As an artist I respect this phenomenon and I want to take part of, as well as foster it. From this point of view I suppose I regard Isadora as an artistic extension of myself, and my efforts on it as major in my art practice. .

Bertram Niessen: What do you think about softwares like vvvv or Jitter? Do you think they can compete with Isadora?

Mark Coniglio: On one hand, yes. Yet, at last I don’t think there is a real competition. Jitter, based on Max, is basically boundless. If you have the right skills in terms of programmation you can do things diffucult or even impossible to realize with Isadora. But that implies a lot of studies. I don’t know vvvv very good, but I think that as many vj softwares, it pushes you towards a specific video language, club culture orientated. This is not a negative side, and I know that several softwares are very powerful. But I firmly believe that Isadora allows more personal expression, and this is the most important thing for an artist.