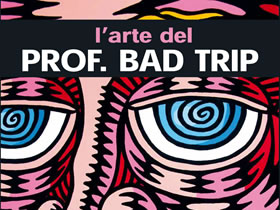 The 5th of June a new island emerged from the virtual ocean of Second Life . It is not palms and flowers, as every other, it is not decorated with sentimental balls and “Beautiful” houses.

Its name is Decoder Island (you can find it at: Decoder 119, 218, 25) and its name already speaks volume on who followed with passion the Italian underground and cyberpunk scene. Who doesn’t know Decoder magazine? It has always been interested to technology and counter-culture from 1987, and it is now in Second Life thanks to its founder Ermanno “Gomma” Guarneri , but even thanks to its Milan publishing house Shake e Idearum.org . At the inauguration, a big post-industrial structure of 5 floors was waiting, with the psychedelic and jazzy colours of Prof. Bad Trip . Experimental artist in the illustration area and reference point of the contemporary underground art, Prof. Bad Trip aka Gianluca Lerici has been the author of the most interesting and significant Decoder covers. Permanently exposed on the most cyberpunk island of Second Life, the works are part of the newly published book ” L’arte del Prof Bad Trip ” in memory of the artist deceased at the age of only 43 last November. Sketchbook, comics, collage, drawings and even the “Naked Lunch”, the comic draws by W.S. Burroughs romance. The book and even some works can be bought in Second Life. For your avatar, T-shirts of Prof at only 10L dollars.

With Gomma, that in his second life is a huge avatar half punk and half cyborg, we had a little chat in Second Life. We asked him to tell us how did the idea of Decoder in Second Life was born and most of all which are the projects for next future.

Maria Molinari: How was the inauguration of the island? I know there was a parallel event at the Shake.

Gomma: I’d say rather well. We had almost 100 avatar in a couple of hours, all Italians (I didn’t expect that). In Shake a computer projected the images of the inauguration, commenting the project or even SL, for those who didn’t know the program. This is only literacy, one of Decoder tenet: teaching publicly computer or software to people

Maria Molinari: Which were the comments?

Gomma: It’s been a little weird because though a wi-fi net and almost a HUNDRED people with their own laptop, almost everyone was looking the big screen. During a similar event we received lots of questions, while this time it was like a show

Maria Molinari: Maybe they were astonished by Second Life as well

Gomma: I think they were more attracted by the show, than Second Life itself, and this is a good point.

Gomma: It was the only practicable and accessible space where expose 100 works of the artists, and it seemed it worked. It is hard with this kind of artist to find a, private or public, gallery that spend 50.000 euros to organize an event like this.

Maria Molinari: What do you expect from Second Life?

Gomma: I only expect to improve the relations. The point is amplify or make easier the relation between people or avatar. For example, you can make the most original music for Second Life, but the real power is social networking that allows you to have a crowded concert hall in a few minutes with people from all around the world.

Maria Molinari: Decoder is now an art gallery, that’s true, but at the same time a piece of art itself. Who projected this, who build, who collaborated and how?

Gomma: It has been a partnership between me and Idearium, particularly Axellbor Zinner and Zeelee Kindley. We tried to develop a cyberpunk concept, but not taken for granted. Axel is a great programmer and he went from theory to perfect realization. I oversaw the whole work, but intervened a little.

Maria Molinari: Some define the building of the show in SL as post-nuclear

Gomma: I say it is rather industrial because rust dominates. And then proportion and equilibrium are so much precarious, I like it, they symbolize the contemporary human condition. Post-nuclear re-start from zero, Hiroshima , after a fallout nothing more.

Gomma: He wouldn’t have create anything for Second Life, he didn’t match with the Net a lot, he was a craftsman. I think he was for relationship without mediator, that means no media through the couple. It is an anarchic theory, picked up by Hakim Bey as well, the author of “Taz, Zone temporaneamente autonome”.

Maria Molinari: If Prof would be here, would you propose to exhibit in Second Life? What do you think he would have answered?

Maria Molinari: The biggest curiosity now is the evolution of Decor Island . I know you’re creating new spaces and organizing new events Can you anticipate something?

Gomma: It will get one of the reference point for the Italian scene, as ShaKe was in the press area. We now have the experience and enough friends to do that!.