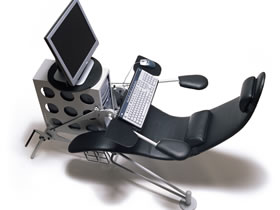 Why do you go to Sonar? Because of music, parties, Barcelona, summer starting, friends from all over the world you meet once a year, new persons you meet, the sea.

It is true; they are all perfect reasons which exert pressure on your finger clicking on the flying ticket to Cataluña. There is even another reason why it deserves to be seen. Sonar is maybe the richest Mundial exposition on contemporaneous media environment transformations. Sonar Multimedia is not only a media art festival, but a show on new media too, a series of workshops and conferences on digital media, and every time is a sort of treaty of experience on contemporaneous media passage.

With a lucidity deserving of the best scientific research (or of the less academic, make your choice), the multimedia section of Sonar manages to seize with extreme precision the essential outlines of media mutations. Three are the key concepts of Multimedia 2007: magic, immersion and aural society.

After exploring the redefinition of space and territory in the epoch of digital media (2004 – Micronazioni, 2005  Landscape art of XXI century, 2006 – Always On), SONARMATICA explores the universe of magic, or, better, of the magical nature of technology. The relationship between magic and technology is a central knot not only of the contemporaneous collective imaginary (and in particular of the way to represent technology), but it is a central aspect of the cognitive modalities we activate when we really use technologies .

SONARMATICA 2007 stages the magical nature of media technologies and to do it is inspired by the famous Arthur C. Clark’s Third Law, ” “Any sufficiently advanced technology is indistinguishable from magic.” A complete change from previous sections? Absolutely not, on the contrary, it’s its perfect sequel! Magical logics is one of the main cognitive modalities through which we handle interaction with the majority of contemporaneous technologies, especially with those which are no longer based on mechanics but on electricity and are exposed today on a panoply of digital technologies.

We don’t know exactly how they work, but we know exactly what we have to do, why we do it: The typical mechanism of magical thought which structures our relationship with technology is analogy. We use analogy each time we have to do something we can’t do or whose functioning we unknow. We do it to turn it into something we know. As Marvin Minsky writes: “When the inner functioning is too strange, or unknown, or complicated to make an idea, we extract the parts of its behaviour we can understand and we represent them thorough familiar symbols, or with names of familiar objects doing similar things. It is a great idea, this use of symbols; it allows our mind to turn strange things into common things. “

This magical-analogical modality of interaction with technology activates every time we have to do with something quite complex whose meaning we don’t understand fully, every time we elaborate an analogical mechanism able to explain causal correlations which otherwise we wouldn’t be able to do. So, in the case of digital technology, we use quite always magical logics.

Retrieving a charming and circensian approach of a nineteen-century physics laboratory, in which scientific demonstration was a show that had to charm, terrorize and surprise the public (see phantasmagoria) Sonarmatica explores this knot magic- technology through a series of multimedia works by artists such as Masaka Fujihata, Paul de Marinis, Julián Maire, Takeshi Ishiguro, Golan Levin e Zachary Lieberman.the new Etienne Gaspar Roberson who will turn MACBA undergrounds into the arena of digital phantasmagoria.

While the concealed spirits of technique invade the CCCB , at the Centre D’Art Santa Monica , SONARAMA 2007 promises a total immersion into the spatiality of sound. SONARAMA is the selection of Sonar devoted to the developments of new media art and in general of multimedia expressive forms. A schedule rich in workshops, installations and terrific performances made this area of the festival one of the most visited. The subject of SONARAMA 2007, the installations, audiovisual lives and performances scheduled make it sure that The Santa Monica this year will be literally stormed.

Sound spatialization is one of the more fascinating areas of contemporaneous experimentation. From the Work of Total Arte by Wagner to Vortex Concert in the 50’s , to French experimentation by Ircam from the 70’s, the idea to turn music into a system of physical stimulations which rebuild an authentic spatial environment providing holistic listening experiences. Forget frontality, the stage, the directional space and immerge into a spherical space within which music is to be heard not through ears but through your entire body.

Among the projects , cinematic and virtual sculptures by Jost Muxfeldt (Audio Kinematics ),a mixture of spatialization and graphic visualization of sound http://kinematics.glyph.de , the total dream machine by Kurt Hentschlager which with FEED a sort of biologic evolution of the Stendhal Syndrome www.hentschlager.info , and the opposite, the sensorial deprivation, the progressive elimination of sensorial stimulations of Blackout Concert di Tres – www.elsilencio.com/concierto_para_apagar.php?l=en, which finish when the maximum level of silence and obscurity of the environment get .

At this point, if you take a glance at half of the schedule and you undergo to Sonarama sensorial bombing you will be at least exhausted. If you find a place where you can relax come to CCCB and conquer one of the ergonomic seats of the section DIGITAL ART A LA CARTE, wear your headphones on and taste a wide menu divided into three shows.

The second show, Aural Networks , conceived by the Galician collective Mediateletipos – www.mediateletipos.net , explores the use of the Web and in particular of the platforms 2.0 for the distribution and production of music and sounds. How has music changed? Which are the new paths of music? What has changed during the listening? Which instruments does the web offer to produce music in a collaborative way? Which instruments does it offer to organise the wide panorama of contemporaneous music production? The web is recomposing this jagged panorama providing aggregation instruments working according to semantic and social criteria.

Some interesting propositions come by projects such as Pandora – www.pandora.com , classification and distribution ontological system of online music which has become recently one of the biggest web radios with millions of listeners (www.last.fm have they forgotten it?); Earlab – http://earlabs.org , a web sharing system providing links and reviews of musical productions and ambient: ccMIXTER – http://ccmixter.org/, a community giving tools for the production and the sharing of remixes and mash-ups released under Creative Commons; Freesound http://freesound.iua.upf.edu/, community based on a collaborative sound database sharing released under Creative Commons; Jamendo – http://www.jamendo.com/en/, social network putting directly in touch artists and public aiming at erasing the distribution phase.

At the Science Museum of Cosmocaixa of Barcellona, SONAREXTRA presents “Physics and Music. Vibrations for the soul”, show exploring in a technical and physiologic way the production and perception of sound. It is built on a Viennese hands-on à la Haus der Muzik model. A series of instruments, sound sculptures and installations created by the French brothers François and Bernard Baschet providing the visitors to experiment how the fundamental proprieties of music (tones, timbre, intensity, harmonies and rhythms) propagate through sensorial organs of human body.

If you hadn’t enough, there is still an entire schedule of cinematographic projections (SONARCINEMA). Beyond this, flows of music and people during 4 days.