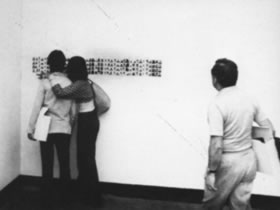 Talking about Franco Vaccari is kind of talking about contemporary society and people’s desires and expectations in communication age. Do they wish to be protagonist, to be recognizable and recognized? Do they like to be in some way spied, spotted, turned into a show? We can say that, yet not without precautions and distinctions.

The Modenese artist has certainly been the precursor of what we now call the show society; the forerunner of relational and interactive work in progress art, one who foretold modern TV formats based on every-day life and media control. His exhibitions in real time represent a unique and evocative current of contemporary art, the overcoming of the old concept of relationship with the public supported by Kaprow in 1959, according to which the artist’s direction was always well planned. His work spans from visual poetry to artistic cinema, from video to photography, up to performance experimentations, always rather original and unsettling.

As Valerio Deho wrote, Vaccari’s exhibitions have their full effects on what is actually experienced on a given moment, that is to say the very event and how that event is perceived by consciousness take place simultaneously. His first exhibition in real time was entitled “Masks” and took place in Varese Civic Gallery in 1969. The audience was handed out a thousand of masks, each with an ordinary man’s face printed on it. When the artist started walking in the darkness with a torch in his hand trying to take pictures of people among the audience, their reaction was to “protect” themselves behind the anonymity. Those were the years of technological revolution, when artist’s attitude towards experimentation started turning from more or less transgressive actions (Migliori’s off-camera or Monti’s photography) to the search for an unchangeable product in time, following the examples of Pollock, Oldenburg, Sophie Calle, Dan Graham, Vito Acconci, Gina Pane and Warhol.

In Italy Vaccari was the one who marked that turning point, when at Venice Biennial Exhibition in 1972 he presented his Exhibition in Real Time n. 4 entitled Leave a photographic sign of your passage on these walls . There was a photomatic cabin where people had to pose for pictures to be taken before they could hang their portraits, thus eliminating their privacy, individuation and subjectivity. An almost announced success.

Now, nearly after forty years since that first Exhibition, Milan dedicates a big exhibition to the artist who revolutionized the new avant-garde. The show, called Col Tempo , takes place at Spazio Oberdan and is open from 14 th February to 13 th March. It displays the whole work of Vaccari, from 1971 Journey and Rite to 1972-74 Photomatic of Italy , from 1975 Dreams n.1 and 2 to Bar Code  Code Bar presented at the Biennial in 1993, up to video-films such as Via Emilia is an airport or Debora’s Album . Critics such as Vittorio Fagone, Renato Barili, Valerio Dehò and Nicoletta Leopardi will be making their speeches, as pointed out in the beautiful exhibition’s catalogue published by Damiani Press, which stands out for its excellent graphic quality and refinement and the sincere artist’s thanks to Miroslava Hajek, Marinella Paderni, Anna Rita Tassoni and Claudia Zanfi for her invaluable contribution during the years.

Provoker and thinker, Vaccari has given birth to a fundamental series of actions-operations-events, initiatives defined as “art of relation” in which elements from behavioural and social art come together. Beside his works of art, he wrote books such as Duchamp and the Concealment of Work published in 1979, which is an important contribution to theoretical discussion on photography. In 2000 the author’s complete film and video production was brought to light. The review was presented in 2003 during the International Film Festival of Locarno and published as a single monograph.

Beside various personal exhibitions at Venice Biennial, the artist took part in different shows in Italy and abroad, such as the anthological show at the Kunst Museum in Vienna and Minimalia at PS1 in New York . Vaccari, as he says of himself, was deeply influenced by American underground world , for example by Pop Art and his first pieces of art were made using both pictures, especially Polaroids, and videos. Thus in 1972 he created -together with Luciano Giaccari- his work Feedback , using different media. “What interested me most about photography was what it refers to  he said to Angela Marchesani during an interview ( Fluctuating Icons , 2002)  today that characteristic has grown dim because the real world has become virtual [] but maybe videos can make that distance shorter.

As Michael Fried says in his text Art and Objecthood (1963) “The concepts of quality and value  and, since these are essential to art, the concept of art itself  have a meaning, a total meaning, only within every single distinct form of art. What is between the arts is theatre. That is to say, the perception of models of moral values within a form of art depends on how much that art can determine its very essence. Thus, for example, sculpture is different from theatre because of its different relation with time. A temporality which is definitely more spread in figurative arts, since time in theatre lies in the specific moment and cannot go beyond that.

uring those years, the early 60’s, many artists started creating kinetic and mechanized pieces of art like Len Lye did, or repressed sensuous excitement like in Pol Bury‘s works. Those creations made the location so close to theatre that the audience were turned into actors. There is an intense relation between Bury and Vaccari and maybe the first anticipated the second; but what it is really worth bearing in mind is the beginning of “sublime participation of the audience to the passing of time”. Fried knew that very well, since he realized the audience became active accomplice to their route in time.

Bury’s piece of art made of 18 balls placed one upon the other is the same as the photomatic placed in the middle of a room at Venice Biennial. The audience is invited to act, empathy starts, and the shape, whatever shape, will not be eternal, on the contrary, will have a real time. Vaccari confuted Fried’s thesis since his photomatic (sculpture-installation) becomes theatre (moment) to then regain an eternal shape (film-video).

I would like to remember Yvonne Rainer who wrote in 1966: What we can see is a discipline which fits the real time the weight of the body takes to accomplish a given movement and not the acceptance of a form of organization imposed by time.