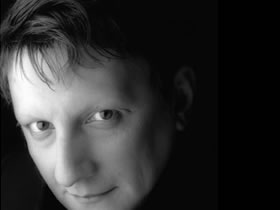 The Andersen Project , the fifth extraordinary solo-show directed and interpreted by the eclectic theatrical and cinematographic Canadian artist Robert Lepage together with his multimedia structure Ex Machina , was commissioned by the Andersen Foundation of Copenhagen for the bicentenary celebrations of the birth of the Danish writer.

The old-fashioned style scene inhabited by back-drop videos projected on a pneumatic mechanical landscape, with mobile platforms and gearings confirms the Lepage’s interest in a theatre imposing tradition to give the impression of being contemporary.

The Londoner lyricist Frederic Lapointe was chosen by the director of the Paris Opera to write the libretto of an opera for kids which drew inspiration from the Andersen fairy-tale The Dryad the tale of a nymph living in a hollow of a tree that renounce to immortality to visit Paris for a day. The third character is the young Morocco immigrant Rashid, a graffitist working as a cashier in a porn club. Frederic comes to Paris full of hopes but he’ll be disappointed, the director of the Opera will be dismissed by his wife and Rashid will go on wander about the underground drawing with his sprays.

Hans Christian Andersen is a character himself, with his top-hat, his passions for journeys and his wild and frustrated love for Jenny Lind. A night the manager, who’s fond of peep-shows, tells his daughter the fairy-tale of the Shade by Andersen, the worrying tale of shade overwhelming men. Behind this tale the real plot of the show is hidden, a show that lays emphasis on the shades of characters, on their sexual worries, their desires, their repressed artistic aspirations. Behind the tale of the Dryad the theme of the awakening of sexuality is hidden and its imprisoning is connected to Andersen’s reality in a rural and conservative Denmark (and maybe Lepage’s reality in the cultural and linguistic Canadian prohibitionism.)

Like in other Lepage’s shows ( Les aguilles et l’opium , La face cachée de la lune ) characters live the drama of disappointment, dissatisfaction, frustration e and the romantic tension towards a love or fame that they won’t realize. In other words: “Human beings who have hope and desires are always punished.

The Lepage’s solo-shows describe the human loneliness, the incommunicability, the separation. The dramatic self-analytical course from rupture and crisis to reconciliation pass through the telephone: his characters are people desperately wandering about with a telephone on their hand. The contrast among the characters is the contrast between Romanticism and Modernism, emblematically represented by the Paris Expo that Andersen visits in 1867  year of Baudelaire’s death, who dedicated his essay the painter and modern life to modernity -.

As Lepage recalls: “The Universal Exposition of 1867 marks the end of Parisian Romanticism and the beginning of Modernism. In Modernism Andersen sees fairy-tales populated by incredible machines, a manly world, a realist and mathematic universe based on very concrete things (). They reproach me to be a Romantic, in my private and professional life. But this is a recurring aspect of my shows: Romantic persons in a very concrete world where there’s almost no room for poetry, excess and passions.”

The scene as an eyeball.

Lepage creates a scene with various levels of deepness: a huge frame as a skirting-board to hide what appears from the under stage or from the corners of the stage by means of artifices and mobile armours. As you know in ancient epochs rises and descents were regulated by a winch with stanchions and pulleys. Maybe Lepage followed this tradition of the ancient theatrical technique (as in La face cachée de la lune ). Two parallel binaries are used to transport objects, persons and environments from a corner of a stage to the other (puppet, tree, marionette, wood horse, phone boxes that change into peep-show boxes).

The question is: why does Lepage use this king of pneumatic instrument whose model you can find in a scene-painting technical manual? The answer is in his kind of theatre and in the motivation of this show: his image-based work, as it was defined, is based on a delicate, confidential and “crafty” relationship among the body of the actor, machine and image, he changes every time.

The show that is probably the most close to Andersen Project is Les aguilles et l’opium, where the actor was hung on a spandex screen where images were projected. But if the dryad is in chains on her tree Lepage is never tied up to technology, he simply force the ancient and traditional theatrical technique to get the same results, as in the mobile set of Elsimore and the transformer scene of La face cachée de la lune .

Lepage knows the year Anderson comes in Paris , 1867 is a crucial year for technical inventions and the accomplishment of the existing ones from press and photography to piston-engine. In 1867 Canada enters the British Commonwealth , it’s the year of the Second Industrial Revolution and of the Great Universal Exposition of Paris organized during the Second Napoleonic Empire where the photography dominates thanks to the success of the so-called stereoscopic views optical machines to perceive the relief  the progenitors of 3D images.

As a matter of fact Léon and Lévy are the authors of 84 stereoscopic views for the Expo. This information explains the weird presence at this show of a particular machine simulating deepness of images. So Lepage deliberately renounces to interact with mechanical or optical systems to detect the movement of the body in the space, or with devises for a polarized view to represent a world at the beginning of modernity to affirm that, in the end, new theatre is not made up of extreme technological experimentation but it’s made up of a perfect equilibrium between contemporary and ancient technology. Points of views.