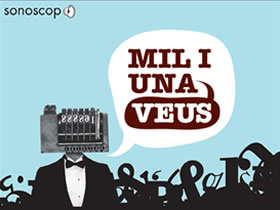 On the occasion of the ninetieth anniversary of the birth of Cabaret Voltarie , the Sonoscop/Orquestra del Caos , presented on the 3 rd and 4 th of November at the CCCB auditorium of Barcellona, Mil i una Veus (One thousand and one voice).

A short review of great intensity, whose main topic was contemporaneous and sound writing, from frenetic poetry, without overlooking the various historical laps, influences and contaminations, to the developments and personal paths the different artists have suggested and are suggesting. The first event was an elegant concert/performance Objectos Perdidos (Lost & Found) , staged by José Iges , Pilar Subirà and Pedro López . The work offers a listening likens to the abstract and dissolute landscape looking at itself through the window during a train trip: the perception of time changes, sound is interpreted in a sensual way, and its meaning is multiplied.

The hands of the master of puppets José Iges allowed you to catch a fleeting glimpse of it, explaining as if he wanted to stage a conference, but making of his sentences pure verbal pretext, matter to distort, modify, multiply, superimpose, decompose, transfigure, recombine with vocal, musical and electronic expedients.

Excellent demonstration of how common words, apparently not poetical, can become poetry, event, and expressivity, of how a language can separate from itself and become a mean of communication through the simple musicality of its voice, with its simple body expression. Iges’ irony, who pulling his leg for his ambiguous and indefinite identity, oscillating between being a musician and being a poet, were a balanced counterpoint, Pilar Subirà’s percussions and objects, able to create sound atmospheres of strong suggestion and the electronic elaborations by Pedro López, allowing poetical traces to backfire on themselves.

Saturday two interesting conferences, took place hold by Eduard Escoffet ( http://propost.org/escoffet/ ), expert, poet and organiser, and Bartolomé Ferrando ( http://www.bferrando. net ), one of the most important Spanish performers as well as visual poets. Eduard Escofet explained the details identifying the phonetic poetry, the revolutionary Dadaist proposal which aimed at breaking and losing the semantic value of the syllable and the sound poetry which began after the war thanks to the invention of the magnetophone, recovers the meaning, doesn’t use scores (even if recently someone is proposing transcription methods), can’t be read, but just heard or, better, seen.

The main obsession of sonorous poetry is the variety of voice, the attempt to reach a level of complexity/simultaneity possible just thanks to recording and to mechanical reproduction. It allows recovering the idea (previous to the XVI Century) that poetry is not related to the papery medium, but almost to listening and it lends itself to vanguards thanks to its nature absolutely open and flexible. Phonetic poetry allows overcoming the linguistic barriers, showing that it is voice expression that contains the main part of the message.

Escoffel has organised even one of the sections of the public sonorous archive of the “Orquestra del Caos” which could be looked at in the “mirador” of the CCCB during the manifestation. His position had four itineraries with 6 authors each one, ranging from baroque to the influence of popular music and the overcoming of linguistic barriers to ultra-environmentalism. Within this last section couldn’t lack among the representatives Henri Chopin, musician and radicalist poet, absolutely contrary to the use of paper, who explores the body and processes it in such a way as to make of it an unexpected sonorous source.

Other positions allowed to look and listen to many interesting materials of the “Orquestra del Caos”‘ database and in one comfortable hall of the last floor you could listen to Octofonia para voz (Simon Frazer Univerisity), tracks by Barry Truax, Ben Wilson, Hildegard Westercamp .

Bartolomé Ferrando’s conference gave many performing moments, which accompanied his hymn to fragmentarity. A track can be expressive as a whole? Fragmentarity isn’t more real then the illusory body of continuity in which it lives, which is nothing but a collage of in motion particles? Discontinuity and repetition aren’t typical of our gestures and thoughts? Those are the questions and the theoretical bases which have pushed him to go into the world of research and vocal experimentation today is an eminent exponent of.

To conclude, great end with the explosive and tough David Moss ( http://www.davidmossmusic.com ), who made his public fall in love with him thanks to his charisma and humour. Following the plot of a simple story he told in an exhilarating way, interweaving sound environments, stratified vocal interventions (whose complexity weren’t always due to his electronic equipment, but sometimes just to two “little muscles” he has in his throat and whose incredible chances he enjoyed to show to the public), built objects he played or simulated its sounds, interacted with whom in the audience laughed, coughed or took pictures. There is little to say about a personage so famous and whose presence on stage and artistic talent can’t be described with simple words, but just looking at him performing and Barcelona did indeed show his appreciation with an endlessly round of applause which obliged him to an encore.

Mil i una Veus was maybe a niche event, because of the topic and because of the promotion and conferences (and catalogue) in Catalan, despite the free entrance, which didn’t attract people ignoring that language. Anyway the organisation knew how to take care of each detail and create a cosy and friendly environment proposing such a complex subject under accessible terms and agreeable performances.