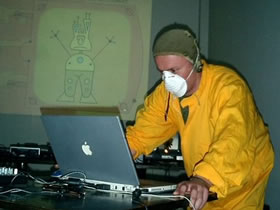 Arcangel Costantini is a volcanic artist that works in Mexico City. From the last 90’s his works have been oriented to the realization of projects later defined as Net Art, whose he’s one of the most representive international exponent. He’s now taking distances from this kind of definition, as he wants his work to have a larger and more complete collocation.

He’s the creator of the Atari Noise , a project developed in 1999 as console to create audiovisual pattern (“audiovisual noise pattern generator keyboard, a game info-deconstruction”, as he defines the project), realized playing on an Atari 2600 , one of the most popular and universally known videogame machine of the 70’s, with whom generations of kids played for almost 15 years. From this starting point, Costantini elaborated audio and video performances, installation and an interactive part of the site playable by the users.

The online project Bakteria proposes interactive interfaces that mix flashdesign, code/machine as language forms and electronic sound (one of the three proposed pièces is realized by the Uruguayan artist Brian Mackern , artist devoted to the audio-visual experimentation through the internet). The message is brought by the narration of another alien or bacteria- that lives on the planet hearth, presented by Costantini through an installation, an intervention or a performance in different places all around the world.

Costantini work is a complex mix between experimentation on machineries (it is not rare to find in websites that present his works the word “hakering” as explanation of the construction process), conceptual processing and categorical will to work as builder of network inside his local reality, Mexico City (the DF, Distito Federal, that he calls “DeFectuoso” himself, that means defective, as he explain in the interview about lack and vitality of his city).

This is the reason why an important part of his work is curatorial. Inside and outside the institutions, Costantini acts to animate, activate and sustain spaces where other artists (that share modality, interests and attitudes) can collaborate and debate. In this optic is created the Cyberlounge, dedicated to the new media , that is from 2000 part of the serious and official museum Rufino Tamayo of Mexico City , one of the engine of the Latin America . With the same optic Costantini is part of the committee of a New Media Biennale intituled Transitio_MX, Festival Internacional de Artes Electronicas y Video (in 2005 at its first edition) and at the same time of independent projects such as Dorkbot (“Gente haciendo cosas raras con electricidad”, international network based on different cities of the world) and ¼, independent space of exposition, debating, installation and promotion.

Lucrezia Cippitelli: You work in parallel on different researches: a complex curatorial activity, an experimental music and avant-garde research, an exploration of the potential of new and old media. The idea I got from your work is that you’re part of a bigger research whose object is to debate the possibilities offered by new technologies to create art and communication, and the procedures they imply, moving critics to structures, formalisms and analysis of the mainstream world of art. How do you manage these eccentric interests?

Arcangel Costantini: I think the realization of all these projects is due to the opportunities and the disadvantages offered by a metropolis such as Mexico City . As artist that develops and uses its works, you understand the lacks and the possibilities of the scene that allow us to be goalkeeper, attacker, defender, manager and public. In this moment, I don’t see any difference between my projects, as they are all part of the contemporary art.

Talking about the projects you mentioned, the first institution of a society is the society itself, and through these activities you try to benefit the society. I work in my local contest, that is what feeds me, as the international research. I try to organize the production times with my managing work. The interest grow time after time but there are still some requires. For example professionals that cure the scanning and analysis of what’s locally happening now.

When I started, my activity was an independent fight from the institutions, private and public, as I worked for a challenge. I gave up that world (and a good salary) to dedicate completely to my activity, my subjectivity, to express my vision of the existence. The obsession for my personal development opened the doors of the institution. This choice addressed my possibilities to subsist independently from my production, giving the possibility to other artists  under collaborative form  to express their anxieties as I do, through the collective example, moving, involving or activating institutional bases.

I think most of the mainstream is caused by the market and the presence of institutions. In our activity the fact of not having a productive object gives us tons of possibilities and independence, even to catch the masses

Lucrezia Cippitelli: How did Cyberlounge born and how did it developed?

Arcangel Costantini: The Cyberlounge was born in the Tamayo Museum of Contemporary Art in 2001 and It occupies the central courtyard of the museum. It’s a complicated space, destined to sculptures and to assembly contemporary art works, which changed its function during the years. With the invite of Osvaldo Sánchez , it changed for the first time in a Media Art space. The project was called Inmerso , for an utopian vision of a total immersion into alternative generated spaces. The program contemplates Net.Art shows, video, sound art, publications, design and media actions. Cyberlounge has six machines connected to the Net, audio/video stations. The furniture is designed by Mexican artists. The new director Ramiro Martínez augmented the activities. Inmerso divided in different channels: Lounge Forum to live presentations; Sound Forum to a series of activities of sound experimentation realized every fortnight, with special guests that participate to the experimental interactive audio sessions; Net.Art show, following the “artistic” vocation of the museum. We realized retrospectives of individual artist, exposing works by Peter Luining, Nicolas Claus, Tom Betts, Stanza, Brian Mackern and collective such as exonemo.com , jodi.org .

The cyberlounge computers are dedicated exclusively to show the work of the artist and we invited each artist to realize an interactive work for its exposition. Net.art is considered a mass phenomena, even if the communication is carried individually, in the sense that the user consumes directly the artist work. During the presentations we tried to invert this tendency, using the artist and its work for a public presentation. The artist created the work and it’s the person who best know it. That’s the reason why we organize an authorial demonstration on how the interactivity of its installation works.

Lucrezia Cippitelli: How do you manage the Cyberlounge with the experience of eccentric spaces such as Dorkbot or ¼ ?

Arcangel Costantini: Working in a museum is a complex game. The institutional rules and the procedures don’t give space to the spontaneity of Media Art, an art that’s continuously changing, becoming obsolete to an absurd velocity. The vocation of the Tamayo Museum is oriented to the international world, even if with Inmerso we had the possibility to include the national production of Net.Art. For example with a show called E-maxico, a project that represented a critic to the restrict vision of the federal government in telecommunications and its non-existent coherence on the cultural production through digital media.

Cyberlounge and the activity of other spaces such as the Multimedia Centre or the Alameda Laboratory of Art made institutions to pay more and more attention to the elaboration of Media Art national projects, that try to dilute the frontier imposed by the mainstream, that tend to exclude because of non comprehension.

Dorkbot is an horizontal and independent proposal of debate and temporary exposition, with an international value. It has been a solid base to a debate necessary for the Mexican community. Dorkbot Ciudad de México was born with the creation of an artists collective that gives it a form, promotes and build in and independent form, to grow apart the institutions. It is now an independent project of contemporary art, one of the most solid and perseverant of Mexico City

1/4 (un-cuarto.org) is another recent proposal. In my home/studio I realized sound-visual events and video shows, sporadically and informally. The courtyard of my building hosted several and different events. Beside there’s a building we use as screen and taking advantage of the artists guest at the Cyberlounge I try to unite them with local producers to favourite an exchange of ideas and proposal. As one of my room is empty and I got a scholarship of the national artists association, I decided to use it to finance this space, used to assembly and dismount the installations. An emergent and independent space dedicated to art and experimentation. We recently hosted the expo Vibracion in situ of the Mexican artist Ivan Abreu (www.ivanabreu.net) and even a session with rhythmic sound machineries.

Lucrezia Cippitelli: I’m definitely interested in the Latin-American new media scene that uses technology to develop experimental research. I’m intrigued by the possibility of a local détournement of information and communication media of the global market. Obviously going further the deep differences between the countries that compose the Latin-America (and the differences inside every country: the DF is another world compared to other Mexico areas). Do you think this potential took shape in some way?

Lucrezia Cippitelli: Mexico has an inventive and experimental capacity not so used in art. The popular and visceral creative sparkle has been suffocated by mass media. Television, informatics media, public institutions and the scarce economic resources maintain the population in a condition of desolation and ignorance. Young people love electronic music, but no other electronic art. Because of no information, because of the teachers, because of the avant-garde institutions, exhibition spaces and diffusion. We Mexican artists assumed the role to increment the institutional support to these production, participating actively as managers, promoters, curators and activists, so as with our works. This kind of activity are now augmenting thanks to the growing interest and institutional support.