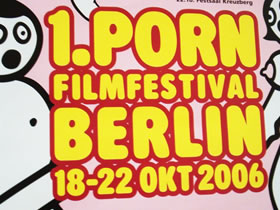 The only imposition, in an atmosphere of total expressive freedom, was the presence of a few elements: a plastic rabbit, a pink star, the words “I’ll fuck anything that moves!” and using only Creative Commons licensed music. The rest was up to each author to decide…

The word “queer”, which means “odd”, or “strange”, comes from the German “quer” which means “slanted, diagonal”. To know more, look into the “queer studies” that have often been the object of exam in English-speaking colleges where this discipline is studied.

Tatiana Bazzichelli defines “hack” as “a brilliant idea” . Undoubtedly brilliant is the idea behind CUM2CUT indie-porn-short-movies festival , highlight of the entire festival, courageously wanted by Jürgen Brüning , owner of WURSTFILM  100%fleisch! and pioneer of the “Cinema of transgression” genre together with Ela Troyano , starring at PFFB thanks to the screening of “Totem” (1982-86), and “Playboy Voodoo” (with Tessa Hughes-Freeland, 1987-89) .

On the FREeSHOUT!? Expressivefairfest, (www.freeshout.it) catalogue  which I contributed to create and organize – Tatiana Bazzichelli writes: “The creation of relationship networks, the sharing of experiences and ideas, and the realization of contents where people feel free to communicate and create artistically: this is what we call networking (…). We invite everyone to help make FREeSHOUT!? an open networking opportunity, taking your own shout of creative liberation as a primary incentive and as an invitation to connect”.

The presence of a great number of actor and actresses, film directors, and artists, made the entire program definitely exciting, yet never vulgar. I ask myself the key question of this festival: can there be a correspondence between art and pornography (which differences with erotica are often explained but never positively convincing?) My answer after this experience is crushing: definitely yes!

The heterogeneous international network, the mix of independent art and sexuality wanted by CUM2CUT unquestionably hit the mark, it exists just like other forms that can be assimilated to pornography, in reputable fields such as literature, comics, classic and contemporary art, poetry, and music (let us not forget the scandal that first greeted “Je t’aime moi non plus” by Serge Gainsbourg and Jane Birkin, which our preceding generation recounts with almost unconcealed pride.. )

But here the objectives go far beyond: the concept sharing (final destination and accessible reality that we so much enjoy), becomes here very explicit from its very conceptualization of intents  first of which, no doubt, are networking and hacktivism.

“Deep throat”, the 1972 feature, with Linda Lovelace  one of the best known movies in the world – inspired the short feature “Deep Dive Superhero” , winner (a parimerito) of the CUM2CUT first prize (. Actually, more than inspired, the authors have operated an actual plagiarism filled with humor and a series of delectable elements very much appreciated by us, the jury, at first sight. A surprisingly variegated result was also seen in the seven other films presented to the public.

Organized by the CUM2CUT team, in collaboration with PornFilmFestivalBerlin, In2It Indie Pr0n Party , the final party – a triumph of videoart, dj sets, and extreme performances  was enjoyed by all at Festsaal di Kreuzberg .

For all these reasons CUM2CUT gathers a success destined to grow, we hope, in numberless future editions. I promised, together with a number of fascinating players in Italy’s creative scene (especially SEXYSHOCK’ s Betties, and CARNI SCELTE‘ s Danilo and Lorenzo  two wonderful projects active in Bologna) to find more opportunities and adequate spaces in Italy to collaborate with Tatiana and Gaia, but I still wonder if the Italian public may be ready for it…