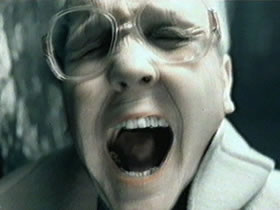 Onedotzero , one of the most important international digital images festivals has just been held in London . It focuses on nowadays digital image aspects musing especially on young artists and creative industry. Onedotzero can be considered as a meeting point and a launching pad for international young video-makers. Its first edition dates back to 1996 and it was born as a week-end meeting: 2006 sees Onedotzero’s tenth annual digital moving image festival launching at London ‘s ICA ( Institute of Contemporary Art .)

Onedotzero team has always looked towards the future. As a matter of fact all the offered programs show how digital image is constantly and unstoppably changing. This year’s edition was obviously a reflection on what was presented during last years editions to see how things have changed and take a look into future visions. Among the customary programs presented there were wavelength. (music videos collection,) extended play (sections of short films and animations) and wow+flutter (experimental animation videos and motion graphic.)

Wavelength06 is a collection of music videos both by well-established video-makers and new talents. It’s a cross-section of last music video evolutions. Music video is in fact one of the most exploited format by young video-makers looking for a launching pad. As a matter of fact, videoclip is both a mere instrument of commercial promotion and an ideal territory for free and surreal experimentation. A comprehensive selection of promos by exceptional artists such as Pleix with his Vitalic’s clip “Birdy” and U.V.A . with their first music video  a light sculpture for Colder called “to the music” and Ne-o who synchronized Coldcut song “The state we are in”  a world première of a video which is part of coming soon Coldcut’s dvd compilation. These were some of the artists in an approximately 70mins program.

Wow+flutter 06 is a visual ideas lab for future moving image trends, this programme presents a spectrum of styles spanning animation, motion graphics and abstract experimentation. Every video  which is obviously used by human fantasy to express inside worlds and reflections  has a double aspect, on one hand there’s a sense of constant alienation towards contemporary society, on the other hand there’s the desire to escape in other dimensions or other worlds without forgetting to laugh on human troubles.

New British talent is a celebration of British creative talent. Realized in collaboration with Film Network, this is an interactive BBC showcase to give exposure to the most exciting new British talent .

Onedotzero presented a series of debut feature films from directors whose early careers featured screenings with Onedotzero. This new breed of director crossed over from music video, graphic design and commercials to film. Well established artists such as Spike Jonze, Michel Gondry, Jonathan Glazer and Mike Mills. I attended a very interesting meeting with the video-maker Dave Mckean . He’s a prolific talent, a legendary cartoonist ( think about the dark visions in a fantastic world of Sandman or Cages in collaboration -or better symbiosis -with Neil Gaiman ), illustrator and a music video maker. He works and composes for BBC radio and he realized his first feature film Mirrormask last year. The transition to feature films is apparently strange for an artist coming from graphic illustration and cartoons, but it was probably necessary for this artist, who’s used to think in images.

In Shane Walter ‘s opinion  the festival director, Innervision has always been the most important festival occasion because it is there possible to meet filmmakers asking them questions and having the possibility to get to know their works better. An extremely interesting moment was Warp showcase which was present both as record and cinematographic ( WarpFilms) company.

Finally there was a celebration for the director Richard Fenwick. Fenwick established his ideas lab ref:pnt [reference point] for personal exploration, and through this project has continually explored ideas relating to technology  specifically man’s interaction with it. the rnd# project [a series of experimental films that will number 100 made during his lifetime] frames his ideas  a visual notepad on this preoccupation. These short films mix animation, digital fx and live action, some lo-fi in approach others polished productions. rnd is an exploration into technology’s effect on humanity as we enter the 21st century. They show Fenwick’s range and diversity as a moving image maker, au fait with live action, drama, factual content, animation and use of info graphics and motion graphics.

Let’s mention the presence of the young artist from Florence Alessandro Pacciani. His short-cut Jinniku was presented during in J-Star (the latest survey of music videos, motion graphics and shorts from some of japan’s finest moving image-makers and young talen). It is a sort of highly technological horror, an hallucinatory work combining oriental philosophy and occidental dark tones.

Onedotzero gives the possibility to young talented artists to show their works all around the world (during the world tour passing by the most important world cities) and it underlines there are no more borders among different electronic arts. Architects can work with musicians, designers with video makers, cartoonists with digital animation experts and so forth in a completely international landscape.

As Shane Walter says in his introduction to the catalogue “Onedotzero acted as a catalyst for new inventions putting together creative thinkers coming from different fields, creating a clash of minds and ideas that produced unexpected outcomes.”