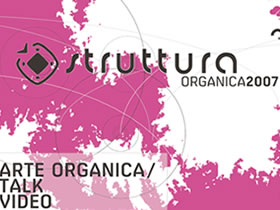 When we, in some years, will have stiffness, and maybe time, to watch behind with the right critical spirit and with knowledge instruments more and more mature and shared, I’m sure that one of the most strong thematic will be the possible relation between technology, nature and art in this systematic order. Struttura Organica 2007, video art and net art festival from 7 th to 9 th September in San Vincenzo  Livorno, is maybe the first Italian exhibition that turns the attention to these themes, through the well-known formula of festival, meetings, art works and live performance.

It is not the fact that the analysis of possible relations between man, its technologies, living organism and art forms are new themes, of course. Replicating dynamic and structure models of Mother Nature, using maths to express perfection, as well as giving people common instruments of coding and interpretation of the technologic reality we are surrounded by through a relationship and a codified rapport with ideal organic, well, all of this is a chimera that art posed in front of itself since its born. From Leonardo da Vinci to Sol Le Witt , through the “unique formulas in the continuity of the space” by Futurists to the architectural vision of Le Corbusier and inside the philosophical-multi-disciplinary thoughts of Ludwig Wittgenstein : “for everyone, maths must be applied to nature  inside physics, from Galileo, it’s more and more applied  and it is general opinion that geometry and arithmetic describe the world”.

Obviously the use and develop of complex calculation instruments, the born of more and more dynamic and accessible software, the possibility of an exchange and share of knowledge more and more spread in the Net, as well as the precocious born of virtual worlds to build and live in, they give a vital atmosphere plenty of possibility. Degenerative digital art , bio art and the most recent forms of media architecture ( those of Zaha Hadid, Libeskind, Nox and Novak, just to mention some ) are just some of the most brilliant examples of what said.

Well, the 2007 Struttura edition analyses those themes through a series of works and meetings on the paths of possible interconnections between nature and science. Contact points expressed through those art forms that have inside their DNA this strong dualism: electronic arts. Central appointment of the San Vincenzo 3-days will surely be the presentation of the book Art Biotech, in the presence of its author Jens Hauser , but also the round table about generative art with Fabio Franchino and Alessandro Capozzo , the installations and live by Otolab (with their new work Animula) and Alessandra Cianelli , as well as the video collection proposed by Invideo ( not to be missed the Torsten Fleisch videos ).

We talked with the organizers through a multiple interview that evidence how Struttura is a project in evolution, supported by a group of people, that have different competences, experiences and formations, even if all related to the multimedia and art world. The artistic direction take advantage of the richness brought by this plurality, so it’s cured by some subjects.

Marco Mancuso: The relation between technology, art and nature is one of the most actual themes of art and communication of the new media. Struttura is a festival of video art and net art that during its 3 editions focused on different thematic, searching for a theme analysis modality made through the exploration of several practices and disciplines. How do you think to conjugate the general themes of analysis related to art in video and on the Net inside a bigger and multi-faces context (subject next year to analysis), such as the dialogue between human-nature-computer?

Francesca Nadalini: The choice of organic art and the art forms that explore the relationship between technology and nature as unique theme of Struttura 2007 is surely determined by the actuality of the theme. We understood that in this case, more than in others, art is evidencing to the public the social and cultural changes determined by the science and technological experimentation with reference to human and nature. As always, Struttura talks will deepen the aspects of the theme starting from the prospective research of means privileged to their interpretation thanks to the participation of experts of the art forms object of the program (video art, net.art and computer animation). Thanks to this approach, peculiarities of the expressive meaning will emerge in the interpretation of the interconnections between the natural and artificial spheres, conscious that they cannot be auto-referential and technical, but they must interpret the content of the art work.

Gianfranco Toninelli: Struttura, as project, is a collector of contributions, a gateway that promotes the participation of curators and artists interested in the creation of confrontation and dialogue moments on themes that are sometime too much exclusive and niche. This is what distinguish the festival from the other: a 360° approach to themes. The catalogue at the end of the manifestation will collect all the contributions of people that will intervene during the exhibition, recomposing an ensemble vision of the theme, as it was for “Studi e visioni sul mare digitale”, catalogue of the 2006 edition.

Marco Mancuso: When video and net have works that investigate the relationship and interpenetration between technology and nature, I got some doubts on some elements of the program. For example the conference on the procedural art, recognized as excellent form of graphic design and software art, but not form of machinery art quickly proposed during the years because of codes and generative modular languages. Generative processes made by a computer can replicate and remember the autonomous and all-sufficient nature processes; don’t you find a simple and at least a non real parallel to the description of complex processes that we’re still far away from their replication with machines in a sort of technocratic omnipotent delirium? (nature and universe are ruled by secret organic and chemical-physics processes, so non reproducible even if by the most evolved forms of A.I.).

Thomas Alisi: If the aim of procedural art would only be the replication of nature, it would surely be a little limitative. The investigation of meanings must be seen with more aims than the only creation of a parallel, as the study of dynamics that, can start from “organic” generative processes, but also create new aesthetical and sense experience.

From a strictly scientific point of view, it is extremely elegant to recourse to quantum description that rules the dynamics of the elementary particles present inside the material and how they are described in probabilistic terms, just think to the indetermination principle of Heisenberg. In this optic, the generative art can express the situation of an artist that, thanks to a brush, intervene to atomic level inside projects that have nothing in common with A.I., rather try to gain a detail and expression level that simply didn’t existed until the discovery of the material electronic properties. The debate is therefore not the technocratic delirium, rather the evolution of the conscience to frontiers once unknown that now can and must be taken in consideration.

Marco Mancuso: Some of the partners of Struttura work with video and technology, such as Invideo and Virtuality for example. Did you directly confronted with the programs they proposed or did you leave carte blanche to the involved professionals? (Apropos, really interesting the Invideo exhibition and excellent choice for Thorsten Fleisch).

Andreina Di Brino: In the case of the Invideo archive, I did whatever I wanted and proposed a selection of international character putting together works of young promises, as the French Delphine Hallis or the Belgian “video-choreographer” De Bemels, with the well-known name of the international video-artistic panorama as the American Susanna Carlisle, multi-decorated author in the US and Europe and that collaborated with artists such as Woody Vasulka  pioneer of the video art -, Bruce Hamilton or Joan La Barbara , and the German Thorsten Flesich, student of Kubelka and author of experimental movies presented in many festivals and manifestations.

Luca Carlucci: The collaboration with Virtuality Conference  a step forward for a future and more integrated partnership  has been possible thanks to the helpfulness of Maria Elena Gutierrez, art director of Virtuality and Resfest Turin, that offered the selection of the digital short movies that participated to the last edition of Virtuality (selection presented, out of its original site, only in Milan). It is a selection of absolute value  some of the presented movies already became little classics of the contemporary computer animation  and heterogeneous. And the theme of the dialectic organic body  digital body, so fatally intrinsic to CGI animation, goes constantly and transversally through the movies presented with different degree of centrality. Well, the Virtuality selection enters the theme of organic art in a discontinuous and heterodox manner, purely phenomenological, taking to task visual and narrative forms that goes from experimental to abstract to traditional cartoon with a cinematographic mark etc It covers a new expressive zone, waiting for research and programs more modulated and structured, on which we already started to work.

Marco Mancuso: The panel “La declinazione del vivente” and the presentation of the book “Art Biotech” by Jens Hauser seem really interesting. I had the opportunity to read the English version of the book, and one of the central theory is that the so called “bioart” is an artistic practice that starts from organic and natural processes, from chemical-physics reactions and scientific proceedings that have only a little to share with computing and digital disciplines in general. Apart from this analysis, it is surely interesting, even if a little short-sighted of some artistic project where the usage of computer is integrated and even amplify the organic proceedings (think about Evelina Dominitch and Dimitri Gelfand, Kurt Hentschlager and Cae), how does Struttura 2007 concept compare to the apparently opposite theory exposed by Hauser?

Pier Luigi Cappucci: The approach to biotech art substantially observe the organic dimension and insists on this element as possible new dimension of artistic experimentation. The book by Jens Hauser, “Art Biotech”, published by Clueb-Mediaversi, integrated the content of the French catalogue of the world opening for biotechnology art (“L’art Biotech” of Nantes in 2002) with some unpublished essays. Other approaches at the “living” theme, apparently analogue, start from the artificial life and intelligence thematic, that art affronted during the 80’s. Who’s working as theoretical or artist inside the world of biotech art knows those kind of experiences and consciously decides to follow other way. It is not about being short-sighted, rather focus and area choice. Anyway approaches and experimentations able to integrate the digital/technological component are allowed, even if outside the current emphasis that sees it as preeminent.

Marco Mancuso: Which are the themes for next editions, the most interesting symptoms you notice in the video and net art? Don’t you think that, arriving to a possible fourth edition, Struttura needs a higher conceptual point of view, with a bigger and inter-disciplines vision for a more structured table of the existing evolution inside the artistic, social, technological and communicational area?

Agnese Benassi: The edition of Struttura 2007 is configures as a “rite of passage”. The choice of the “Organica” theme has been a challenge to enlarge our border, building bridges between the studied practices in the past editions and other interdisciplinary artistic experiences. Looking at the program, even Sunday MultiMediasug follows this direction, presenting heterogeneous projects that give back the vivacity and activism of the multimedia Italian panorama.