The Last Supper: Souvenir From Milan 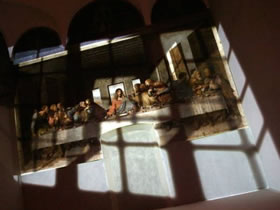 “Behind the scenes there is a cultural turmoil of anxiety, trouble, phone calls, institutional activism (which characterizes me and has involved me a lot) to obtain from the Ministry the already granted and then revoked authorization to Greenaway to elaborate his reading, animated with lights and sounds, of Leonardo da Vinci’s Last Supper, exactly like he admirably did with Rembrandt’s Night Watch and he is going to do with Picasso’s Guernica.”

With these words, Vittorio Sgarbi, who at that time was the Milan culture councillor, presented the reading of Leonardo’s Last Supper by Welsh director Peter Greenaway. It is an installation of lights and sounds, which was inaugurated last 16 th April in Milan , in the week of the Furniture Fair; through his interpretation, the artist wanted to give life and voice to Leonardo’s wall painting again.

Not to belie the rotten habits of the Italian institutions, the intervention was the occasion to vivify more a “theatre” of disputes rather than Leonardo’s work. The cultural turmoil about which Sgarbi talks is in fact a “theatre” of comments and denying among the Government office for Art, the Councillor and the Ministry, where everybody played their role, defending the innovative charge of Greenaway’s project rather than the necessity to preserve the delicate preciousness of “Italy’s cultural heritage”! This finally brought to a cloning of the original work to allow the artistic intervention (which was not invasive at all) of the director.

It is a very faithful reproduction of the Last Supper, made by Adam Lowe for Factum Arte thanks to a high-resolution panoramic photographic image and the 3D scanning by the Istituto Centrale del Restauro (central institute for restoration), an exceptional screen located in the Sala delle Cariatidi in Palazzo Reale in Milan, which has become, together with the account of disputes and excuses on the preservation of Leonardo’s painting, the true protagonist of the event.

Like it often happens in the discussions involving the chaos of the Italian cultural workers, the dispute becomes the true piece of news and very little or nothing is linked to something really important, in this case Greenaway‘s work, presented in the brochure as a cue to talk well or bad about the state of conservation of the Last Supper and the problems concerning its preservation.

The catalogue edited by Charta says literally nothing: it is a tome of photographic reproductions of the painting, if it should be still necessary, which does not talk neither about Greenaway’s project nor about the refined techniques through which the director and Reiner Van Brummelen, the director of photography and special effects and the steady collaborator of the Welsh artist, elaborated the structure of the painting.

Greenaway’s work on Leonardo’s Last Supper is part of a project that the artist started in 2006 with an audiovisual remaking of Rembrandt’s Night Watch at the Rijksmuseum in Amsterdam, beginning a series of interventions on masterpieces of international modern and contemporary art among which Velasquez’s Las Meninas (The Ladies in Waiting), Veronese’s Le nozze di Cana (The Wedding at Cana), Picasso’s Guernica, Monet’s Water Lilies, Pollock’s One: Number 31 and Michelangelo’s Giudizio Universale (The Last Judgement).

The concept of the project is to create a connection between painting and cinema, between the painted work and a set of projections and sounds, which is prepared directly on the work. From this interpenetration to create then a new creation, an evolution starting from the original, underlying and developing the cinema strengths, hidden in the painted work.

And we had wanted people to talk about this attempt, about Greenaway’s challenge to interact not only with the painting as a technique, medium and method, but with the painting as an instrument of expression, the field of art icons and symbols of cultural traditions of these countries. And, in fact, the director interacted with the Italian culture, or better, with the representatives of the cultural panorama and the media that should deal with culture and that in this challenge saw and lived only on an apparent threat against Italy’s most important cultural symbols, without taking the trouble to consider or to comment on the real validity of Greenaway’s intervention.

And maybe it would have become clear that the highly acclaimed reading of the artist is actually only a show of technical spectacularity, empty perceptive charm that disappears almost immediately. While other visitors and I, mostly bored and puzzled, were putting up with the highly cheered Greenaway’s work, I was wondering where the reading was. As a matter of fact, Greenaway does not read the expressive power of the Last Supper, nor the tension of the narration, but he uses Leonardo’s work as it were a background, a surface of shapes, lights and colours, an environment on which he can test a series of beautiful special effects.

It is aesthetic perfection which is an end in itself and does not interact with the original; it is made even more paradoxical by the baroque dramatic force of Marco Robino‘s music. The intervention does not extract the dramatic features from the painting, it does not let the visitor in the scene and above all turns the situation narrated by Leonardo into a crèche of motionless statuettes, except for a short moment in which the dance of the characters’ hands becomes the protagonist in the light.

Greenaway does not penetrate and does not investigate the composition of the figures, the lively gestural expressiveness and the tension of the Apostles’ postures, a structure of hands, heads, mouths, eyes and voices that, alone, speaks more than the multimedia effects that the artist put on, creating a dumb screen on which to show useless pompousness.

Maybe this is the only merit of Greenaway’s huge work: to have represented in an exemplary way a souvenir of the redundant and empty show of the Italian cultural situation.