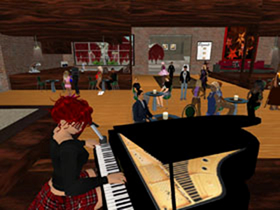 There’s heaps of music in Second Life. Each night of the week there are dozens of lives, new record labels have opened, the BBC channel 1 has bought an island and broadcast on Saturday the 13 th and Sunday the 14 th of May “One Big Weekend” festival.

Avatars are sitting in the hall dancing, chatting and meet the artists at the end of the concert.

Independent artists start to have their new fans following them in the various live performances in SL and are already selling their own music and promoting their groups in the real world. I met some artists in Second Life and tried to understand thanks to them the development the musical panorama is having in the virtual world.

Multiverse Records is one of the first record labels of Second Life. It organises events, promotes artists and allows them to sell directly their music supporting this way independent artists and their skill in earning with their own art. It a precise project which declares to believe in the new culture of the hyper-connected universe. According to Foxyflwr Cure , a celebrity among the musicians in SL as he defines himself – here they are experimenting the future of music as it should be, “we have complete creative control and own our intellectual property and our merchandizing rights”. In each place of Multiverse Foxyflwr there is a position where you can listen to previews of tracks and download them buying them. He says he is already earning from his activity: “I convert my lindens to us currency via pay pal, then direct deposit into my acct: in rl”.

He organised an event in Real Life, with 4 musicians of Second Life performing live on a stage in Emerald City , Philadelphia . It was a success, with the fans of second life listening to it live from outside the net. The first live in mixed reality, taking place contemporaneously in a club of Philadelphia and in SL with the avatars of the musicians. There is a continuous exchange between Second Life and the real world and Spin Martin confirms it (the new owner of Multiverse Records). I had a short chat with him in front of the stage where he organises the concerts. “I’m doing a CD listening party for a band and I’m also a music podcaster part of tower records, I bring stuff in here out there and vice versa.”

Muse Isle instead opened just a month ago. It is an island entirely devoted to music, run by Mike Prevost, Jeb Spicoli & Martha Cookie. It has an arena for bigger concerts, the Cecilia’s for club performances and an art gallery. I meet Mike, Jeb & Martha at Cecilia’s. Martha, the group pr and the show organiser, fixes me a meeting during Cylindrian Rutabaga’s concert (another esteemed singer in Second Life). While the concert starts we move on a tower, in order not to disturb the show. From here we will be able to listen to the concert, Mike reassured me.

I ask him where the artists really are while performing in Second Life: Mike Prevost: People play in their homes, it’s a very intimate, authentic way to perform and they are in streaming here via shoutcast, they send a stream to a server, the server replicates it to all the listeners, all in real time. Mike Prevost: you can also replicate the stream and allow anyone on the net to listen, not just second lifers, it’s a very easy way to play for an international audience, so we’ve got Grace playing now, sitting at home in Atlanta, Georgia and you can listen to her in Italy, Marco, that makes something which is really intimate also very powerful!

Mike and Jeb are American and have a small independent label and tell me Musle Isle is above all an experiment borne from their love for music and their desire to share it with as much people as possible. “This place is about bringing listeners and artists together in an amazing way” dice Mike. I ask Jeb, who has just finished his performance, how he feels when he performs in SL. Jeb Spicoli: I’ve played in a band before and the Interaction is way different, I feel fine, but there’s about a 12-20 second lag, so it’s hard to properly interact with the crowd. It’s really neat, though, I must say, to play in front of a crowd where one person may be from Italy , another from the UK , then another from Australia , etc.

Mike Prevost: that’s unreal on a weeknight; I’ve seen people “singing” along at shows. So people make a connection, lots of website visits and CD sales to artists that do that Mike Prevost: the emotional angle is hard to gauge due to the medium though Martha Cookie: I’m inclined to think that actions speak volumes of the emotional response people have to though.

During concerts the public of avatars dance, sit near the tables or in the arena. At the end of the show, they have a chat with the musicians: moments of exchange and of knowledge. I read that in Muse Isle European concerts too are scheduled, that is to say planned according to our time zone. In fact, this concert is taking place for me at 3 o’clock in the morning and it is quite inconvenient. Martha has the same problem because she’s English, Mike and Jeb live in Florida . She met them in SL and I believe they never really met even though they are running this project together.

During the weekend there is a party on the island of BBC simultaneously at the event One Big Weekend of BBC Radio 1’s in Dundee , Scotland , from the 12 th of May. There will be performing bands such as Muse, Razorlight and Gnarls Barkley. Those concerts will be broadcast in streaming in SL in an enormous tent. It is the first concert in a virtual world with really important bands with 400 participants compared with 3000 who participate at the real event. But it is an important experiment and BBC Radio 1 schedules to use this space next year for new artists’ debut.

During the concert I have a talk with FanOfNick Drake, musician and expert of the musical scene in SL: FanOfNick Drake: There are some very good performers… most from the US Lyndon Heart, Flaming Moe and Astrin Few are really good As well as Slim here…- and he points Slim, long red hair, dancing by our side – there is also Mel Cheeky from Cardiff UK, and Cylindrian Rutabaga Moe is a Jazz Saxophonist, the others are singer songwriters There are a lot of DJs here too, some of them real live DJs…Quite a few clubs playing various kinds of music. For me I love listening to singer songwriters… production does not matter, the soul, the spirit matters

I ask him too how the relation with the public is, which I think to be the main point to emphasize the possibilities of interaction compared with listening to a concert on the radio. FanOfNick Drake: The point is that yesterday I played my show to about 30 people all over the world: My fan club is now about 6o people in second life And I have only been here a few weeks. No need to rely on other people to give me publicity, slots, 3 minuts of radio play where my songs r 5 minutes long… It is wonderful because I can grow my fan base, and there are a lot of people who like me

FanOfNick Drake: So, in other words, it is good for independent music and it will grow over time. I also play live in RL and many of us are retying to tie second life to real life performances. Second Life seems to be a real platform where experimenting with music and Linden is showing great interest in the musical scene “in world” as they say here. But majors too seem to be interested in it and some weeks ago there was a rumour going on that “Ethan Kaplan, the Director of Technology for Warner Bros. Music, is looking for someone to build out a Second Life installation for one of Warner Bros.’ bands.”

Music in Second Life is a rising scene, full of stimulus; contributing in making more and more interesting and complex the panorama of virtual worlds and it strongly connects it to the real world. When Spin Martin communicated that he had bought Multiverse Record in March 2006, he launched an appeal we can consider a wish for this rising scene: “I hope that the resources and creativity that we all bring to the table put us in the position to not only keep on creating music art, but to find sustainability, and perhaps in the process, prototyping and developing the record industry of tomorrow-one that works better than the industry of today. Here’s to the future!”.