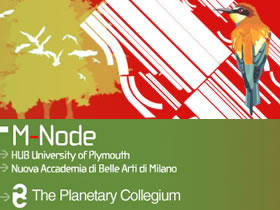 An ever increasing number of artists shift through cultural interfaces, means and genres evoking both science and mythology, both technology and tradition. Postmodernism’s heritage has changed into transmodal transit; today the human being is modulated by images, hyperlinks, processors, and nets; our sensorial world is redefined or better re-balanced by the collision with the arising realities new models of the world and our subjectivity are generating.

The new art is connected to the means making it available, realizing it, and transmitting it; the new praxis is making pragmatic and philosophy at the same time; this praxis generates interactivity and socially and aesthetically changes the common sense while reflecting on the mutant nature of perception, connectivity, and conscience.

The deriving works of art are made up of self-conscious associations of meanings, of unconscious sensibilities, of scientific historical data, of multiform units and afferent discourses, which are totally wove in the new digital or natural and biological telematics environments and that give us new experiences and original creative visions.

This is what has come out during Researching the Future – art and design in transmodal transition 2006 , a meeting that took place in Milan from 8 to 9 February that presented intuitions, proposals and projects from the artists and researchers of the Ph.D M-Node program, in collaboration with the Media Design School of NABA ( Milan ) .

Says Francesco Monico promoter of the entire operation: “We recruited a first group of great researchers and distinguished professors, researchers, and artists participated at the meeting. Reporters weren’t paid to participate, they accepted our invitation to scientifically share their experiences in a cultural frame. The process of the research worked very well and an atmosphere of cultural enthusiasm permeated the first phases of this experiences.”

“The lecturer  says M-Node project director  is also a part of this will to do because he has to give up a rich and sometimes uneven economic remuneration. Didactic institution has to do the same. Everything works very well and the ethical and founding object of the research  incentive researchers and make them assume a responsibility and motivate lecturers  is persecuted.”

It’s clear this system of local welfare should be supported by the government or by a social organism that should realize social amortizations, that is, forms of integrated aid for the ones who really need it.

So M-Node is a new model, of British origins, that poses as an hypothesis of sustainability the concept of local welfare and places itself as an innovative centre of experimental research.