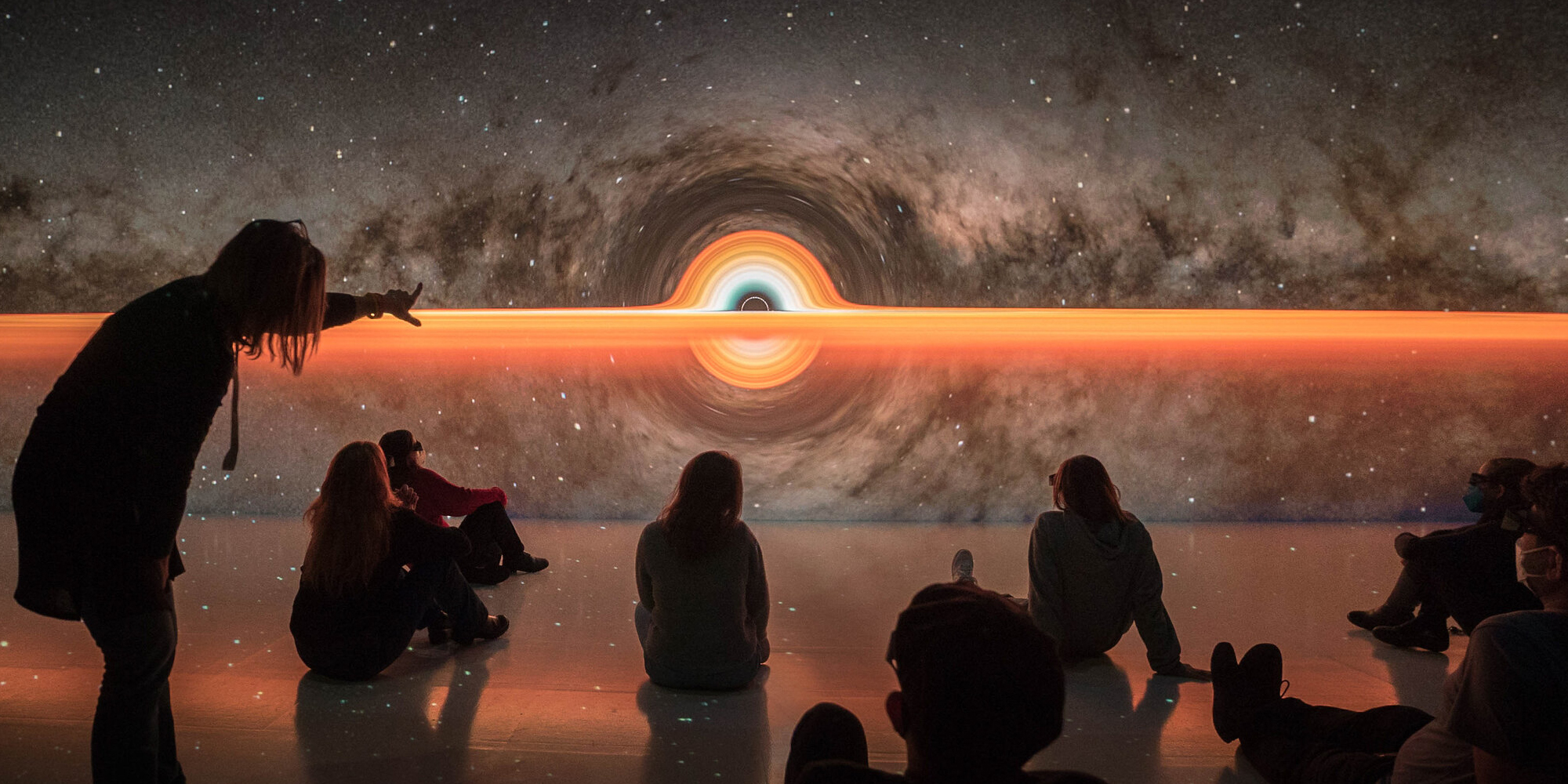 New laser projectors, the most powerful high-performance graphics cards, a 3D tracking system, a new control interface, and a whole range of new interactive programs and spectacular applications: With Deep Space EVOLUTION, the Ars Electronica team is opening the next chapter in immersive visual worlds.

Back to the future, or everything starts with the CAVE…

On September 6, 1996, the Ars Electronica Futurelab team invites you to a world premiere. On the program is the opening of the CAVE: a 3 x 3 x 3 meter room that puts on big performances. Everything inside it—floor, ceiling, walls—is a projection surface. A network of four computers and a tracking system that registers the position of visitors equipped with 3D glasses enable an unprecedented immersion in virtual worlds. The CAVE will be a unique playground at Ars Electronica where scientists, artists and developers from all over the world can use their imaginations and experiment with new ideas here in Linz.

Let’s go back to 2009. Linz is the “European Capital of Culture” and members of the public are invited to the opening of the new Ars Electronica Center on January 2. The Museum of the Future, which has been expanded to 6,500 m², now has a “Deep Space” that immediately pulls in the crowds. Wall and floor projections here measure an impressive 16 by 9 meters, and laser tracking allows for the staging of interactive settings. Because the Ars Electronica Futurelab’s sophisticated high-tech composition is the only one of its kind in the world that’s also accessible to the general public, Deep Space attracts a great deal of international attention.

In spring 2015, the Ars Electronica Futurelab team tackles the next milestone. After months of intensive research, tough negotiations and extensive testing, Deep Space becomes Deep Space 8K. The new name refers to the resolution of the projected images, which now comprise a whopping 4096 by 2160 pixels for each of the eight projectors. This results in a resolution of up to 8K on the wall and floor, depending on the geometry of the installed projection. Deep Space 8K guarantees visual experiences that truly take your breath away.

For months, the teams at Ars Electronica Futurelab and Ars Electronica Solutions have been pushing ahead with the evolution of Deep Space 8K.
For the display on the 16-x-9-meter wall, Deep Space 8K now has four laser projectors that bring several advantages: they can display a much larger color space, require 32 percent less power and run more quietly because they don’t need as much cooling.

The seven workstations that run Deep Space 8K were also completely renovated. The result is an increase in computing power of around 200 percent, with a simultaneous reduction in power consumption of 10 percent. There has also been a significant increase in performance with the graphics cards: instead of four, only two are now required per computer, which in turn reduces power consumption by around 40 percent.

Whereas Deep Space 8K previously had 2D tracking that could register the position of objects on the ground, the room is now equipped with a new 3D tracking system that can identify any position in space. The new system is used for interactive audience programs, artistic projects and the many interactive experiments conducted by the Ars Electronica Futurelab. In addition, the new tracking system forms the technical basis of a virtual production system that was also developed in the Futurelab and has already been used in Home Delivery Streaming.

Last but not least, Deep Space EVOLUTION stands for a fundamental revision and further development of the control and operating system as well. This includes an update of the software to achieve more security, more reliability and a higher robustness. A newly implemented content management system opens up numerous additional functions, and a new control interface on the smartphone is also available to presenters. The Unreal Engine used in the world’s leading computer game productions is now used for 3D content development. A new license management system for content packages also guarantees that content from Deep Space 8K can be easily passed on to partners. This system is already in use at the JKU medSPACE at the JKU MED Campus Linz as well as at the Cubo Negro at the Centro de Ciencias in Culiacan, Sinaloa Mexico.

Explore our solar system and learn how life began evolving on Earth. See the complex anatomical structure of Homo Sapiens and learn to understand how the human organism works. Follow a fascinating interplay of art and technology that points the way to the future of humans and machines. An interactive simulation game that presents us with choices about which technologies to rely on and how to change our lifestyle to limit the impact of climate change….
Deep Space EVOLUTION also represents an evolution in content, opening up exciting stories, multiple opportunities for interaction and an even more immersive experience for the audience.

Uniview 3.0
Why does the Earth have a magnetic field and what does it protect us from? Why is the atmosphere vital for us? How was the moon formed and why is it indispensable for terrestrial evolution? And what is the “habitable zone”?

“Earth — a special planet” takes visitors on a spectacular virtual journey to discover how we and more than eight million other species are able to live on this planet. It is just one of several new storylines that are now part of the weekend program in Deep Space 8K, thanks to the 3D application “Uniview” further developed by Zeiss. Trips are offered to all the planets of our solar system, a pulsar or the giant space-and-time-bending black hole in the center of the Milky Way. Brand-new 3D models of the ISS and the James Webb Space Telescope will show how humans are preparing for ever longer space missions and taking a closer look at exoplanets in foreign star systems.

Virtual Anatomy
Back to planet Earth and the species that call it home. “Virtual Anatomy” focuses on one of these and spectacularly visualizes the complex organisms that evolution produces. Measurement data from modern medicine, such as magnetic resonance imaging (MRI) or computer tomography (CT), are transformed into photorealistic, three-dimensional models using Hollywood-style visualization strategies that make the interior of Homo Sapiens visible and comprehensible in a way never before possible. “Virtual Anatomy” is a multi-year collaborative project between the Ars Electronica Futurelab, Siemens Healthineers and Prof. Dr. Franz Fellner of the Department of Radiology at Kepler University Hospital Linz.

Welcome to Planet B
In a completely different way, another application also developed by the Ars Electronica Futurelab addresses the future role of humans and machines. “Welcome to Planet B” is an interactive game that asks what we want to do to limit climate change and its effects. Whether it’s energy, waste, housing, transport or agriculture — the players have to take a position and decide on a strategy for the future. It is never a question of right or wrong, but always a question of weighing up the advantages and disadvantages that every decision entails. But one thing is never in dispute: The worst of all options is to do nothing. The development of “Welcome to Planet B” was supported by LINZ AG.