Florian Hecker is an artist who creates acoustic works using synthetic sounds and the visitor’s auditory processes as material. His computer-generated, spatial, compositions dramatize questions of psychoacoustics, objective-physical stimuli, and their individual, psychological, and physical effects.

A sculptural presence emerges from the complex multi-channel installations, disrupting the notion of a coherent, continuous world of identifiable coordinates and reference points. For Hallucination, Perspective, Synthesis, curated by Vanessa Joan Müller, Kunsthalle Wien’s exhibition space transformed itself into a resonating space, and a stage for sound events that exceed linguistic description and categorization.

Positioned in the centre of the exhibition space, Resynthese FAVN is an extensive elaboration of FAVN, which was presented at Alte Oper in Frankfurt in 2016. FAVN is an abstract work that evokes issues surrounding late-19th-century psychophysics as well as Debussy’s Prélude à l’après-midi d’un faune, which itself is a musical adaption of Stéphane Mallarmé’s L‘après-midi d‘un faune. 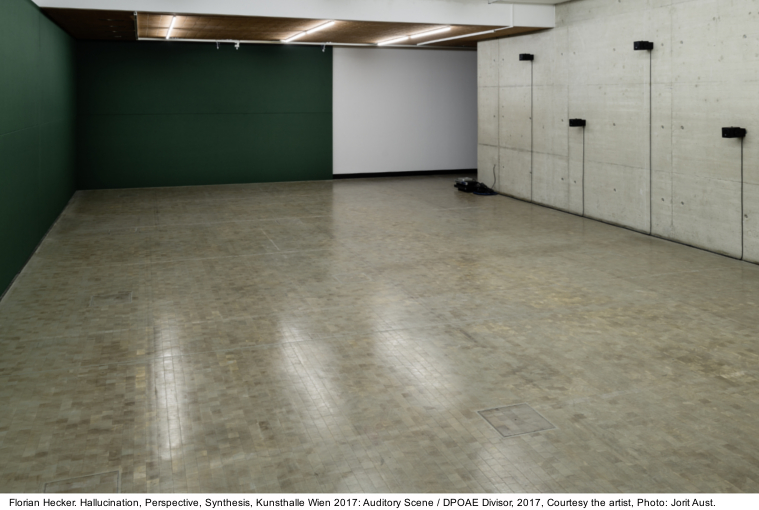 Taking these coordinates as its starting point, Resynthese FAVN is the product of a minute, computer-controlled analysis that transforms and resynthesizes Hecker’s original work. Mallarmé’s poetry already traces the blurry boundaries between reality and imagination, sensory perception and hallucinated event, and so does Debussy’s composition.

Resynthese FAVN propels these ambivalences, forcing listeners to explore their own perception of fluctuating acoustic realities through algorithm driven processes of sound generation. During the exhibition, eight different versions of this piece can be heard in the course of a day – and with each version, the work becomes gradually more crystallized, acquiring a sharper and more defined outline with each iteration.

What’s significant is the conceptual intensification of late 19th century trends as they are embodied in Debussy’s work: the quantification of the senses and an explicit exposition of timbre. Produced against the background of a stage stripped down to its essentials, these complex sounds are presented as something that cannot be traced back to any known source. 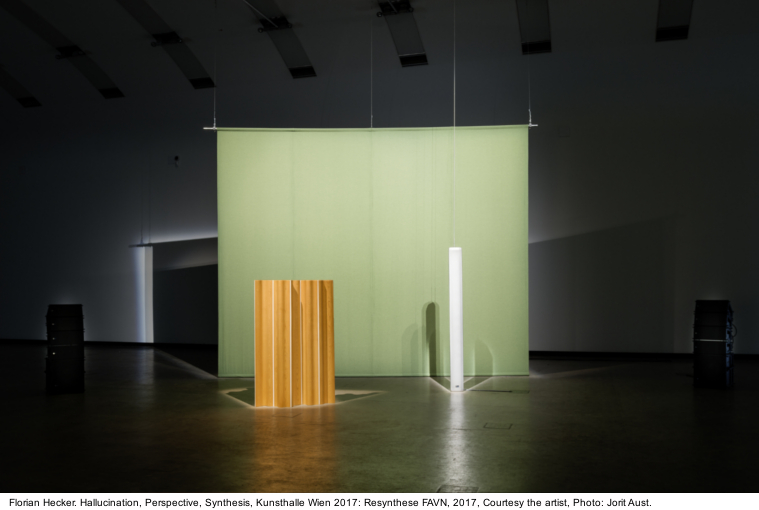 Ultimately, our auditory perception decodes these sounds as sensory objects originating from different locations. Resynthese FAVN thereby also problematizes the notion of singular or self-contained perception. The same is true in two other works presented in smaller rooms.

With its rising arpeggios, distorted glissandos, entirely static tones, and eruptions of noise, Affordance (2013) defies any expectations that may have emerged from what was previously heard. Totally synthetic, the piece is literally based on sounds that are “unheard” of, thus creating a musical ontology that no listening process can fully fathom.

Based on a highly formalized tuning system, the second work created for Hallucination, Perspective, Synthesis likewise focuses on the question of what sort of intensities are triggered in the recipient’s brain-ear by what type of auditory stimuli. With their rigorously formal staging, Hecker’s works intensify a sensory space – one that disrupts the structural cohesion of experience and opens itself up to what Mallarmé called a “hallucinatory” experience of something that cannot be pinned down by way of a clear verbal description.

Florian Hecker creates scenarios that require an audience whose reception alone will first cause them to impart their entire tonal and psychoacoustic spectrum. The works produce a form of an Immaterial that is perceived and materialized through the very subjective process of the encounter with the same. 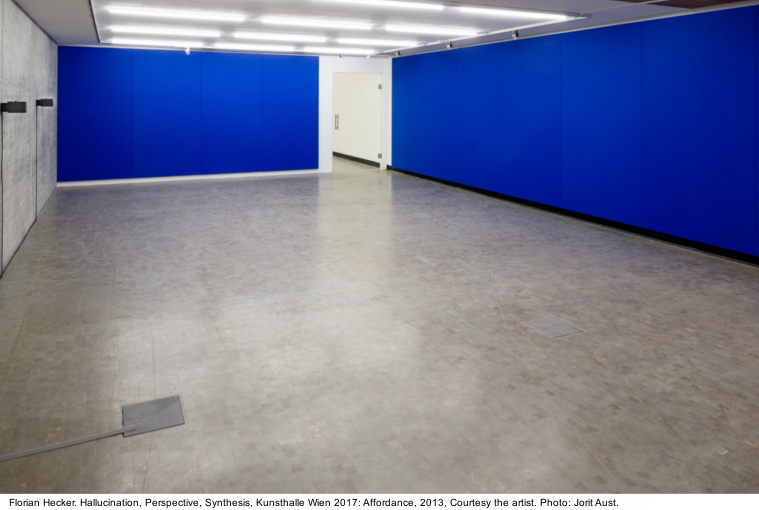 The examination of compositional post-war Modernity and audiology encounters considerations of Conceptual Art and Minimalism on viewer involvement and subjectivization of the objective given: on perspective and situation.

Florian Hecker (*1975 in Augsburg) lives and works in Funchal, Madeira and in Edinburgh, Scotland. He studied art at the Academy of Fine Arts, Vienna, as well as Computational Linguistics and Psycholinguistics at Munich University. Hecker is currently Chancellor’s Fellow at the University of Edinburgh.