From June 9 to August 7, 2016, the Ullens Center for Contemporary Art (UCCA) presents John Gerrard: Power.Play. In his works of the past 15 years, John Gerrard has pioneered the use of post-cinematic, virtual space through complex algorithms that generate imagery in real time.

Often exploring geographically isolated locations, Gerrard’s works frequently refer to structures of power and networks of energy that have coincided with the expansion of human endeavor in the past century. Illuminating the entryway of the Nave with the image of 10,000 mirrors, Solar Reserve (Tonopah, Nevada, 2014) is a portrait realized as a virtual world, a massive light sculpture depicting a power plant located in the Mojave Desert. As an artist, the game engine is Gerrard’s primary medium, and the artwork is exported as a piece of software, which, here, produces a non-durational image in real time projected without frame. This post-cinematic portal meditatively glides along a 60 minute orbit around the solar plant, a symbol of humanity’s reliance on and resistance to solar rhythm.

John Gerrard’s works involve feats of documentation followed by painstaking digital replication. His requests for access to sites, however, are not always met with welcome. Such was the case for Farm (Pryor Creek, Oklahoma, 2015). Rebuffed by Google, Gerrard hired a helicopter to assist in the production of a covert photographic survey of one of the company’s server centers, or “data farms,” in Oklahoma. While this process is not considered a part of the final work, it illustrates the guerilla-style production tactics the artist feels are necessary in approaching topographically extreme sites. Here, “extreme” describes both the surrounding geography, barren countryside, and the (conspiratorial) regulations delimiting access to these otherwise banal regions. 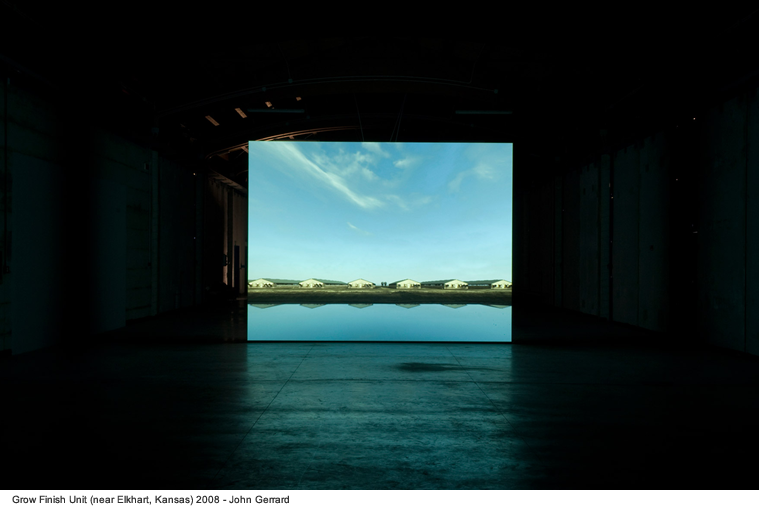 Extending Gerrard’s Grow Finish Unit series, which focuses on architecturally similar, computer-controlled pork production units in the American Midwest, Farm (Pryor Creek, Oklahoma, 2015) is a synecdoche of the information systems and power structures that organize the resources enabling it, eerily reminding viewers of the direct influence digital space carries over the real landscape.

Work on Exercise (Dunhuang, 2014) began when a friend informed Gerrard of a mysterious network of roadways the size of a small town in the heart of the Gobi Desert. After visiting the site in person, Gerrard digitally reconstructed it using satellite depth-scans of the markings. To add another layer, Gerrard has placed avatars based on motion scans of 39 workers from a Guangzhou computer manufacturing plant, wearing blue uniforms and paper bonnets, into the simulation, their movements as they wander through the vast network mirroring those of the actual workers. Viewers of the dispassionate surveillance are telepresent and omniscient, yet strangely disconnected. 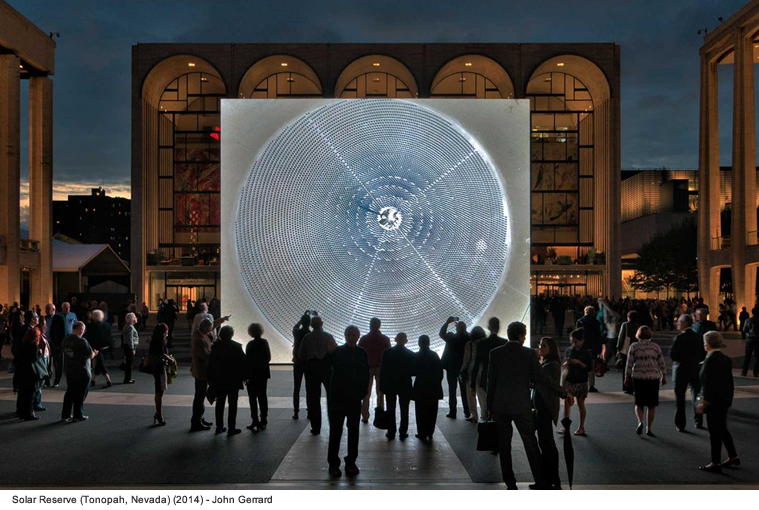 John Gerrard: Power.Playis curated by UCCA Director Philip Tinari with assistant curator Guo Xi. The video equipment sponsor for the exhibition is Christie Digital System (Shanghai) Co., Ltd. The exhibition is supported by the Embassy of Ireland in China. The exhibition is accompanied by a bilingual publication that includes essays by Robin Mackay and Manuel Shvartzberg as well as a dialogue between Gerrard and Robin Peckham.

On the occasion of the exhibition, UCCA and John Gerrard have organized Image.Object, a series of master-class workshops focused on developing skills in 3D imaging to take place at four of China’s leading art schools: China Central Academy of Arts (Beijing), China Academy of Art (Hangzhou), Guangzhou Academy of Fine Arts, and Lu Xun Academy of Fine Arts (Shenyang). Each workshop concludes with an informal exhibition of completed student works.