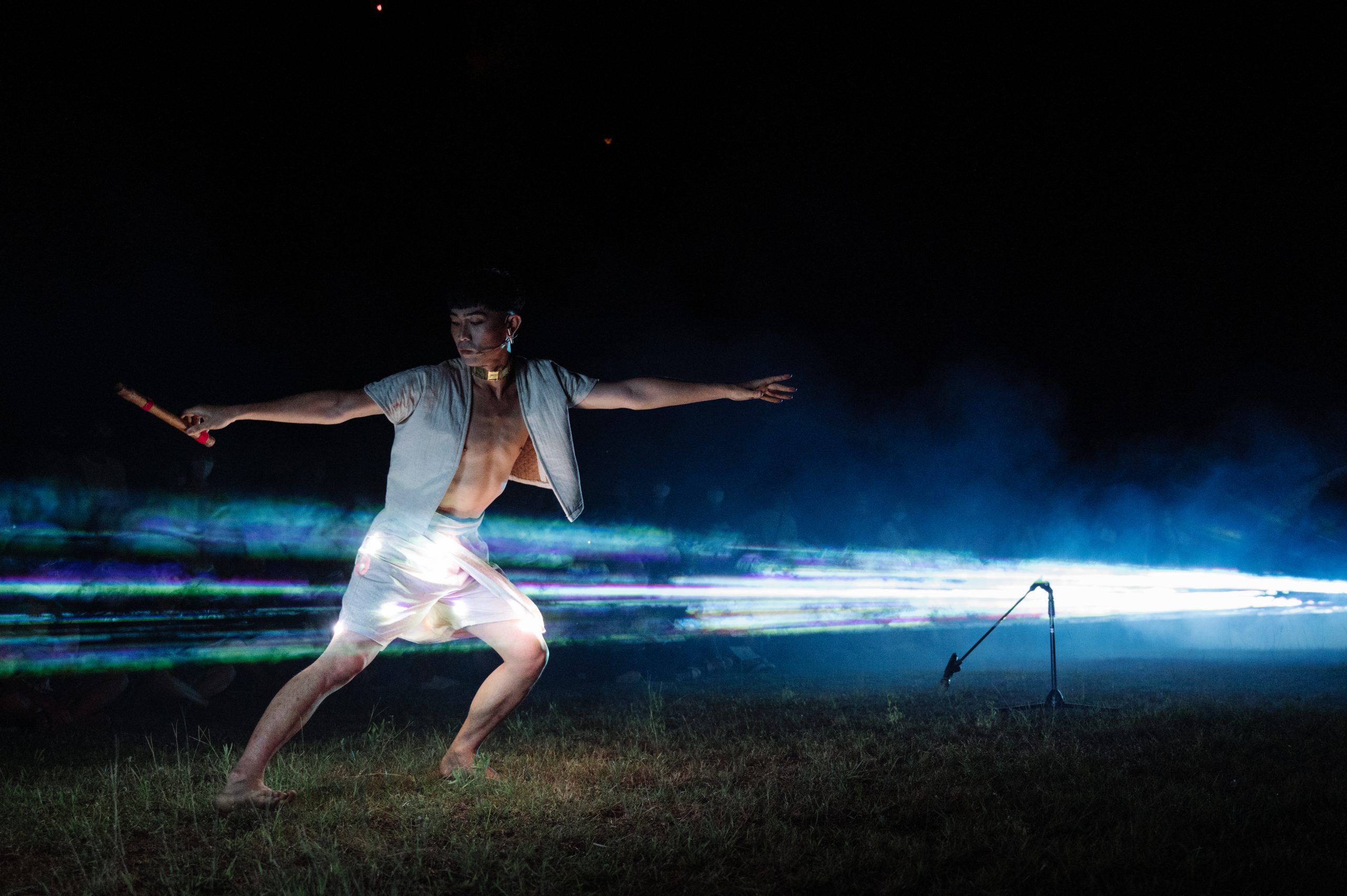 Hagay Dreaming, the most ambitious and radical work presented during Ars Electronica 2022 wasn’t even part of the festival proper. Rather, it was hosted in parallel by Stadtwerkstadt, an independent cultural venue in Linz. This “techno-fantasia guided theater of revival” has been initiated and schemed by Shu Lea Cheang, and written and directed by Dondon Hounwn, an artist working in installation and performance art, and a practicing shaman from the Truku tribe, one of the 16 recognized indigenous tribes in Taiwan.

The play is based on an ancient legend, dreamed up by Hounwn.

Long ago, a hunter walked alone into the mountains to hunt. Unexpectedly, he encountered a sudden downpour. The hunter wandering in the forest discovered a giant tree hollow in which he sought shelter from the heavy rain. The hunter fell asleep while waiting for the rain to stop. Not knowing how long he has slept, the hunter woke up and heard birds chirping and insects buzzing. He walked out from the tree hollow and found himself in a fascinating forest where everything seemed to sparkle. He was lost in the forest where suddenly he came upon a group of naked people who embraced each other in intimate manners. The hunter took a closer look and found that they were all male but look more like gorgeous women. The hunter inquires, “Who are you?” The group of people answered, “We are Hagay.”

The Hagay began to communicate with the hunter, and he learned from them much valuable wisdom concerning rituals, hunting, and weaving. The hunter sensed that he was not in the real world and fell asleep again. When he woke up, he found himself back in the tree hollow and the rain had stopped. As he came out of the hollow, it was the forest he had entered. He could not tell whether he was dreaming or if he had been to the spiritual world and back… Back to the tribe, the hunter adopted what Hagay had taught him and continued to share their wisdom. From this time on, when men who also possess female traits are born in the world, people address them as Hagay…. 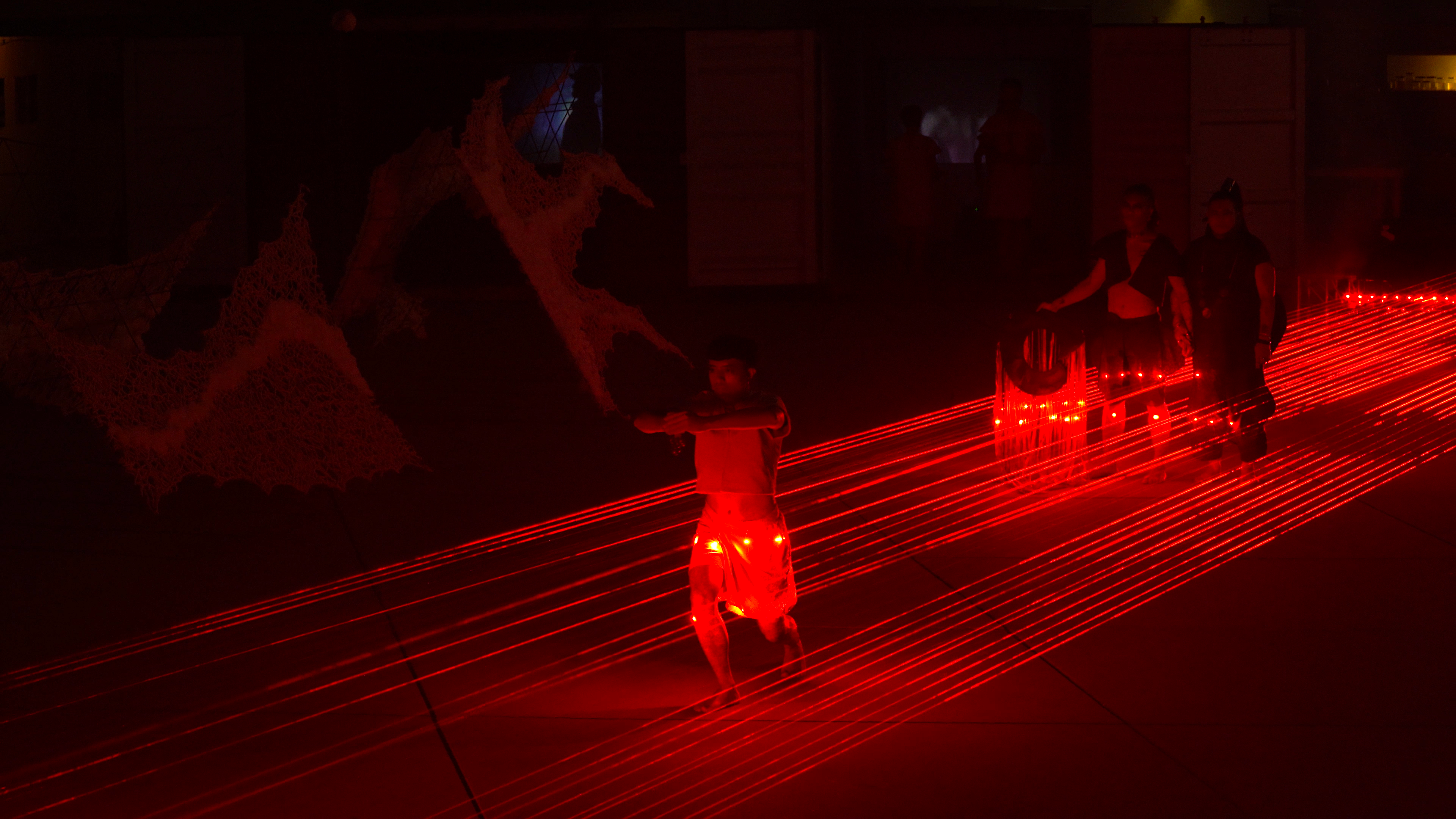 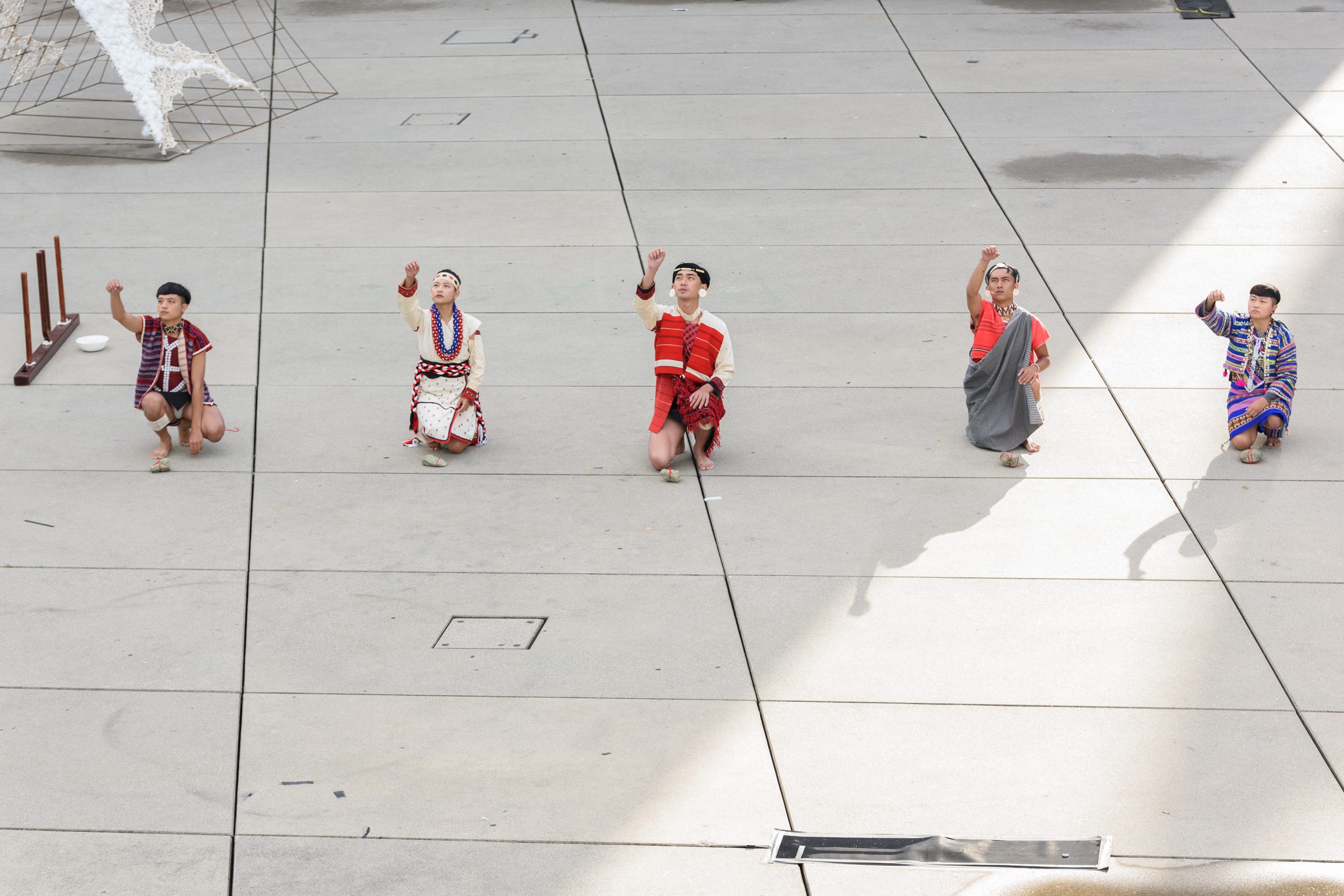 To be honest, the narrative flow of the legend was hard to grasp for me as a non-Chinese speaker, despite the translations provided. But that didn’t matter, because the power of the play unfolded primarily on visual levels. On the one hand through the strong presence of Hounwn who led a group of performers, staging seven theatrical acts in a very measured, yet highly expressive style of dancing and musical performances that mixed traditional and experimental styles in an entirely fluid way. This blend of indigenous and futuristic was even more evident in the brilliant use of lasers as a visual medium by aka_chang.

In a deceptively simple, almost modernist construction without any of the kitsch and bombast that characterize most laser shows, the beams created something that could be read as a river or the flow of time. At times, it moved forward, at others backward. The actors stepped in and out of this flow similar to the hunter stepping in and out of his dream. At the same time, when in the flow, the beams were visible as points on the bodies of the dancers which created a unique type of motion capture aesthetics. However, in contrast to conventional motion capture, where the points are fixed on the body and the body is placed in a stable, Euclidean space, here the points were relative to the movement of the body through the flows of time and space, de-colonizing a technology that is still steeped in Western notions of individualism and the accordant relationship between the body and its environment.

我是真正的女人 (I am a real woman) 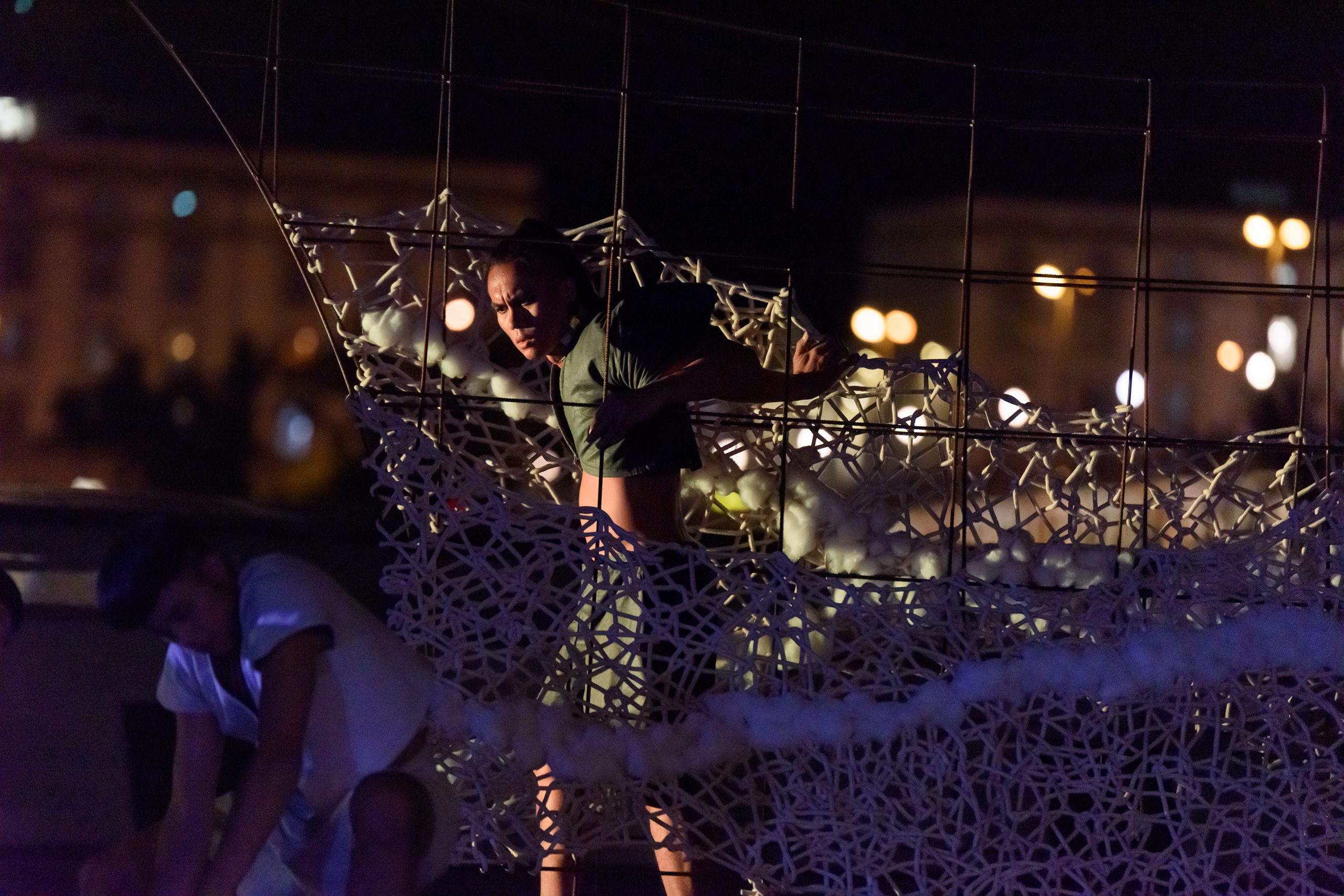 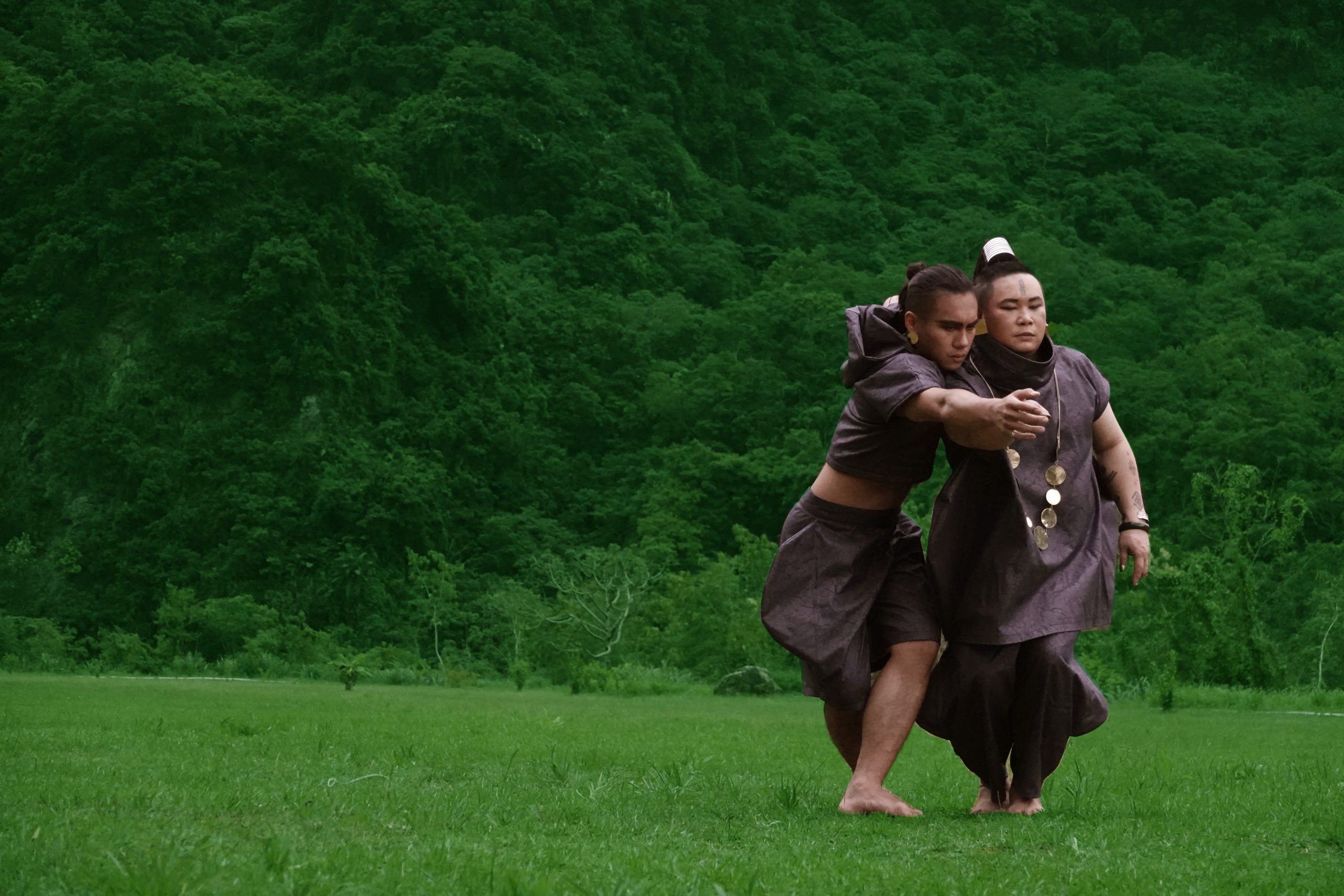 Dondon Hounwn, who is also the founder of the Elug Art Corner, a center that focuses on Truku indigenous culture as a resource for the future, approaches techno-shamanism with the belief that the tribal culture is a technology for knowledge production and dissemination. Hagay Dreaming effectively erased the boundaries between indigenous tradition and futurism, mixing ancient myths and legends with advanced technologies and visual languages. Ignoring the stereotype of indigenous artwork as traditional crafts, Hagay Dreaming reclaims the speculative, curious, and unconventional quality of cultural and digital technology for developing the possibilities of hypothesis and reinterpretation, applying unpredictable imagination to pre-set binaries of male/female past/present, nature/technology.

This is deeply moving and makes it palpable how Western culture [1] is facing a dilemma. On the one hand, digital technology is a key element in the “great acceleration” that is about to destroy the geophysical foundations of human civilization. On the other hand, it is so a necessary requirement for understanding and dealing with the precarity of contemporary planetary conditions. I fear that Western culture alone cannot resolve this dilemma, for its technological imaginary is too entangled with the destructive forces of hyper-individualism and generalized capitalist competition. Hagay Dreaming, at the very least, provided a poetic vision of a world created with advanced technologies embedded in another imaginary. And nothing could be more urgent than that.

[1] I understand “Western” here less as a contemporary geographic marker, but as the place of origin of capitalist, commodity culture that has now spread globally.