Euridice And The Others, Pink Noise According To Motus 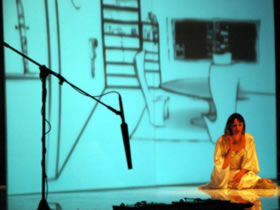 Pink noise refers to the artificial frequencies sound technicians use to emphasize the optimum equalization curve in a venue for music performances.

In 1999 Orfeo and Eurydice, unhappy couple, moved to Motus’ place. Stuck to Hades because of a glance, Eurydice became the omnipresent shade and the object- relic of a phonocentric god, Orfeo, disguised as Nick Cave . Their story is nothing but a small drama occuring in a New York loft.

Pink noise is the last extraordinary Motus’ theatre play already presented at Turin Hill Festival last summer and now frantically touring the centres of theatre research (from Scandicci Dro to Catania India Theatre). The sentimental melancholy here comes back, mixed with the tormented wistfulness typical of picture- stories, though characters are all women and stolen not from the myth but from the American family drama of the 50s and its atmosphere, particularly that of Douglas Sirk’s films re-read by Fassbinder. In this work Motus interprets, thanks to the excellent stylization of both the setting and the interpretation (the performance of Silvia Calderoni, Emanuela Villagrossi and Nicoletta Fabbri was brilliant), the tragic might concealed in Fassbinder’s theatre and cinema work Petra Von Kant’s Le lacrime amare (1972).

In Pink Noise we find three female characters stolen from the numerous examples of women created by the German director, real symbols of the ambiguous dualism servant/master within a couple, even that made of only women (Maria Braun, Veronika Voss, Lilì Marleen, Lola, Nora, Martha).

Dumped, lost, undone, with their hopes hanging on a telephone cord, ill-treated by life according to a long list of clichés about the double woman condition  independent and emancipated or submitted to a domineering power, loved or violated object  the Petras von Kant of the new moving and passionate Motus’ show are three desperate women in one, they swallow their drama and represent it with the marks on their bodies, with the croaking of the needle on a record-player playing an old sickly refrain that gets stuck and obsessively repeats the same sweetish words. Scratches.

Not comforting at all, the place  that once more plays the role of a “watching machine” and symbolizes an exasperating search for an inner space – is a prison with open bars, a cold container where to experience a self-inflicted loneliness. The exasperated life condition is represented by the very idea of pressurized emptiness conveyed by the blinding white room from which just some traces of life can be seen, the inside of an ordinary house, the anonymous corner of an unidentified city. Catatony and dumbness against Orfeo’s voice. Wounds instead of words. Women exposed to life without protection: they chase someone, they are run over, they talk, they are not listened or they are interrupted; they will not easily get to the other side of the road or to the next day; no one waits for them at home; the walls are white and will never have any colour, not even a glimpse of pink. Those walls are so thick they muffle outside noises and do not let the moans from the inside, while the three women twist their skinny carved bodies.

The story is moving and does not have a happy end. During the performance however, the sado-masochist relationships that links the three women are never expressed, nor the ambiguous intimate entanglement of sex and power, or their respective roles. The three women could even be parts of the same form: Petra, who is first hysterical and then elegantly resigned and who hides her uncontrollable pain because she has been dumped behind an icy cold tension; Marlene, the dumb slave who attempts on her own body by torturing it and Karin, the fragile, possessed, never loved creature.

The directors of the play Daniela Nicolò and Enrico Casagrande, talking about their work on psychological definitions of the three female characters and the choice of how to interpret the story, told “We started by making the actresses performing on their own, with the purpose to mix their pseudo-stories later: it was not possible, because what we had were three separate short-circuits, carved separately like grooves on a black vinyl. Black vinyl in a white space: in the beginning we thought about furniture, then nothing more, just black microphones and an electric fan.

The white plexiglas created a sort of “hibernated effect” on the three women, no more characters but just simulations of them, with no more feelings which are yet continuously expressed: a widespread death of feelings nakedly reflected on the mirror-floor. Since they have been reduced to comics icons, we felt the need to underline more their two-dimensional disturbed psychology by placing backgrounds drawn by a comic-strip artist, which represent the only continuous element in the disintegration of feelings. The zooming, the changes in shots between the reassuring and oppressive inside and the desert cold city outside edited the three bits of parallel lives.