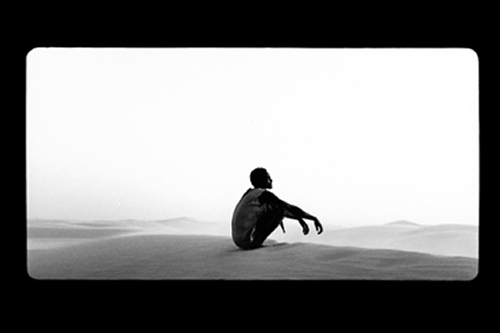 A photographer and a filmmaker, Raymond Depardon, author of what can be described as documentary fiction, was awarded the Pulitzer prize. He is the author of several reportages in countries such as Biafra, Chad, Venezuela. He is also renowned because he spent some time in 1976 at the former psychiatric hospital in San Servolo, Venice. In 1996 he shot a sort of documentary-fiction on a trip in Africa that lasted three years and on the filmmaking profession. William Kentridge was born in South Africa, an artist, whose artistic matrix is drawing, but who ranges from sculptures to animation and video installation and constantly interrogates himself on the social role of art and the responsibility of the artist.

This brief article does not aim to draw a comparison between two artists, whose languages and biographies differ, despite their common interest for Africa.

What follows is a critical comparison, an exploration of two gazes, Depardon’s and Kentridge’s, not because they both portray the wide African continent, but because the aesthetics of their perception is similar. My meeting with them – Kentridge’s exhibition in Venice and the view of Depardon’s film Afriques: comment ça va avec la douleur?Africa: How about pain? (1996) – occurred within the time span of a few weeks.

Between the end of November 2008 and the middle of January 2009 the Theatre La Fenice and the Fondazione Bevilaqua La Masa in Venice hosted William Kentridge’s personal exhibition “(Repeat) From the Beginning/Da Capo”. The works on show – drawings, sculptures and video-installations – were exclusively created for the event. Then, Depardon film, whose rich filmography I already was acquainted with. Among his works titles such as Ian Pallach (1970), Reporters (1980), Dix minutes de silence pour John Lennon , San Clemente (1980), Délits Flagrants (1994) and Un homme sans l’occident (2002) are worthy of mention.

The horizon, the orange and blue sky, the camera that, although attached to the tripod, rotates as if it was at the centre of this universe to produce a Ptolemaic vision of the existence, an awareness of solitude and of the power that the cameraman is experiencing. The director seems capable of a panoptic vision, taking in the whole universe in his glance. Yet, in Depardon’s work we find no rhetoric of the image. From the very beginning, the voice of the director explains what the film is not. A dark screen, Raymond Depardon’s voice-off drawing a precise map and providing the viewer with its spatiotemporal coordinates:

“Good morning I am in Cape of Good Hope, at the extremity of the African continent, on my own, with my camera and my tripod (…) I’m taking advantage of the light (…) There you go, that’s were my voyage begins (…) This is not a journalistic reportage (…) Neither perception, nor perspective mistakes (…) I’d rather improvise”

The incipit of Afriques contains the poetics of Raymond Depardon aesthetics: improvisation, cinema as cartography of the gaze, cinema as experiment with light, as improvisation, as free as possible from any prospective and perceptive model. If on the African stage we merely find a voice and a dark screen, Kentridge’s theatre consists of an improvised orchestra, almost a jam session, whose elements – the opera singer, the conductor, the dancer – elude Kentridge’s control to take turn and look at a solo on stage.

Improvisation is not chaos, it does not mean shooting anything one happens to come across, it does not mean allowing the still disorderly artistic matter to take on a shape, any shape. Quite the contrary: according to Depardon and Kentridge to improvise means to trust one’s own instinct and listen silently, letting the world talk to us. This applies both for the characters-marionettes that inhabit Kentridge’s sculptural universe and for the landscapes and African faces in Depardon’s images.

“Comment ça va avec la douleur?” (How about sorrow?): as Depardon reminds us, is the formula used by French-speaking Africans to greet each other, like our “how do you do?” to make sure that everything is all right. This is, however, the question that Depardon asks not to a specific person, but to a personified continent, Africa. The answer is an exchange of dignified gazes, with mutual respect, between the eye of Africa and Depardon’s.

In the film the aesthetics of the camera movement is crucial. At the beginning, for instance, the dark screen is interrupted by a landscape with red and orange nuances, which then turn to metallic blue and grey. The frame is a long shot, the camera, mobile on a tripod, films the landscape with a circular movement, a slow 360°panoramic shot, where the beginning becomes the end. This technique is frequently used throughout the film, to film the landscape, the protagonist with other human beings, and is always accompanied by Depardon’s voice-off.

His voice, recorded after the shootings, narrates, as if he was writing in his own diary. This voice and the camera panoramic movement show a personal, intimate, never intruding way of shooting. The images do not represent the visible evidence of what Depardon says throughout the film, there are merely a nuance and a circular movement, often with no perspective depth. A mechanic movement, uninterrupted, aseptic, impersonal and, therefore, well-suited to accompany the director’s voice.

Some of the frames of the panoramic shot in Mogadishu, Somalia: the Indian Ocean, the boats on the water. Depardon is accompanied by three bodyguards. The green line that separates the south from the north of Mogadishu.

The movement is almost always from right to the left. The panoramic shots are breaks that the spectator enjoys with the director, breaks to meditate during a journey, musical breaks. One may talk of brief “trips” within a long journey that Depardon made in Africa, not necessarily a linear, progressive journey, rather a set of several circular trips. The circular movement of the camera becomes the metaphor of the journey itself, of the traveller: before his eyes unexpected details start to inhabit the photographic frame of the landscape, which is “scanned” by the mechanic eye: colour nuances symbolizing the passing of time, faces. Then, back to the starting point, ready for a new journey of the gaze.

The same circular movement can be observed in William Kentridge’s sculptures, which are designed to be filmed, rather than to be observed as three-dimensional objects (e.g. William Kentridge, Angela Vettese, Francesca Pasini and Jane Tailor, William Kentridge. Exhibition Catalogue, Edizioni Charta, Milano: 2008). When the viewer comes across the three-dimensional sculptures, he has to perform a circular movement around them to see them fully, to perceive the several viewpoints. These sculptures, consisting of black scrap paper held together by metallic wires and adhesive tape and placed on a revolving pedestal, appear to be abstract, deprived of any intelligible shape. Thanks to the movement of the platform or of the spectator around them, this myriad fragments suddenly become full figures, a whole, stage elements with recognizable shapes: the singer, the conductor (Kentridge making fun of himself). When filmed, and therefore seen as video installations, these sculptures are accompanied by the sound of the orchestra. The sculptural tri-dimensional fragments become a coherent set, a bi-dimensional surface, whose shape and outline, for a moment, can be clearly perceived.

The circular movement that each sculpture performs to become a full-blown shape allows us to observe and understand, to go from chaos to order, from entropy to organization. But this gaze, like this movement, is fragile, it only lasts for a moment, it ends before one can seize it. In Depardon’s work the circular and constant movement of the camera does not allow for an ultimate frame. Rather there exists a constant flux of impressions that can not capture reality in a perfect frame. The same applies for Kentridge’s sculptures.

Depardon’s circular movement is performed by the camera and by the eye of the spectator, whereas in Kentridge it is often performed by the whole body of the viewer. In both cases, though, there is no steady image to be defined through a precise frame, through a snapshot that reveals and explains. The image is as elusive as reality. Depardon’s 360° panoramic view and the spectator’s circular movement around the sculptures show the connection between things, the proximity of every thing, in contrast with the arrogance of the photographic action (and of the eye itself) that tries to “frame” things and sensations creating the illusion of depth and superficiality, of what takes up the centre stage and what lies on the background, of a separation between the things. On the contrary, the sky’s red and orange hues in Depardon’s films are not far, they are rather adjacent to the blue of the night. Kentridge’s chaotic scrap paper is adjacent to the order of the full-blown figures, the orchestra members.

Let us go back to Depardon: we are in Angola. The privilege here is succeeding in growing up and becoming adult, the director’s voice narrates. The images show us no violence, only children trying to drink the drops of water dripping from a truck. Sometimes their gazes meet the camera, but they don’t stop, they keep on striving for survival. This scene is everyday life, nothing exceptional. Depardon is not interested in the visual representation of horror, of the extraordinary event. In Addis Abeba, Depardon says: “the gaze is the talisman and the medicine” and again: “the image comes towards me, it welcomes me warmly, it embraces me and I go towards it”. This occurs because there exists the necessary distance for the movement of the image to enter into my field of view, brush against me and draw back again: the ethics of the gaze, of those who look and of those who are looked at, like the multitudes in Rwanda’s and Burundi’s refugee camps, who stare back at the director and us. It is an invitation to adjust our approach towards Africa, to look at it in a different way.

What is the necessary distance to photograph a subject? When does distance become irremediable chasm? In an interview Depardon points out that the camera inevitably induces to shoot as much as possible and to decide what to discard at editing stage. His procedure is the opposite: he films as least as possible, sticking to the length of the film. As to Afriques, he availed of a mere fifteen minutes for each of the fifteen African countries that he visited. The poetics of distance is maybe at loggerheads with the immediateness and vicinity enabled by that digital tool – Depardon, as a photographer, has often expressed his preference for the silver nitrate. Maybe the question we should ask ourselves concerns distance itself and the possibility for the digital tool to reconsider this concept and transform its aesthetics.

The same distance is necessary to contemplate Kentridge’s sculptures. In conclusion, the secret of Depardon’s and Kentridge’s gaze is the ability to keep a distance from the observed object, rather: their secret lies in the ability to see without scrutinizing. Depardon’s camera moves as if it was an aseptic scanner, a purely mechanic eye. Repeated, aseptic is also the mechanism of reassembly and disintegration in Kentridge’s sculptures: the movement that the viewer makes is a precise journey through which the chaos becomes order and meaning. Both gazes go back to the starting point, to the initial image, but with the awareness that in-between there has been a journey, a movement, a glance.